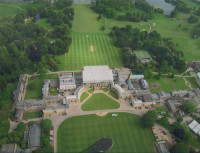 As Grounds Manager at Stowe School, near Buckingham, no one knows the grounds of the historic estate better than Steve Curley. "The best thing about working here is the sheer beauty of the place. After seventeen years it's easy to become complacent about your surroundings, but the reaction of first time visitors always reminds you just how lucky you are."

It's easy to see why Steve is so passionate about his place of work. The 200 acres of school grounds, for which he and his ten-strong team is responsible, are surrounded by the National Trust managed Stowe Landscape Gardens, hailed as one of the finest creations of Georgian England and a source of inspiration for artists, writers and politicians since the 18th Century.

The 200 acre slice of this historic estate for which Steve is responsible, therefore, has to be managed to meet the demands of a modern independent school, whilst remaining in harmony with the surrounding parkland. Managing these demands, in compliance with conservation orders on the park's countless features, both natural and man-made, draws on all of Steve's thirty years' experience as a groundsman. 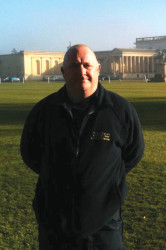 Sport is at the heart of life at Stowe School. Pupils, 90% of whom board, participate in sporting activity on a daily basis. As a co-ed school, its extensive facilities cater for both girls' and boys' sports throughout the year and include:

Steve's career began at Chorlton-cum-Hardy Golf Club near Manchester, where he secured a position as Head Greenkeeper having achieved his City & Guilds in Horticulture, grades I and II and his PA levels 1, 2 and 4. After twelve months, he made the move to Manchester Grammar School as Assistant Head Groundsman to broaden his experience in the management of sports facilities.

A year into Steve's tenancy at Manchester Grammar, and with the retirement of his predecessor, he was promoted to the role of Head Groundsman; a position he held for a further nine years. His time here stood him in excellent stead for his eventual move to Stowe School where, in 1993, he took up the reins as Grounds Manager.

Rising to the challenge 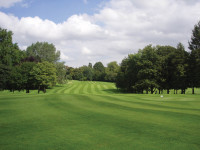 Managing Stowe School's gardens and sports facilities certainly keeps Steve and his team, which includes four other groundsmen, five gardeners and a dedicated greenkeeper, busy all year round. Whilst demands may alter seasonally, the one consistent challenge is to work maintenance around the school's busy sporting timetable; both academic and competitive. Not only does the school use the facilities on a daily basis, but 2nd Division Northampton Town FC use the football pitches for practice three times a week and Northamptonshire County Cricket Club regularly plays first class matches on the school's cricket pitches during the season. Steve says:

"In any single week we cut each of the pitches two or three times, depending on growth, and a

ll pitches are marked out twice a week. These tasks need to be fitted around the school sports timetable. In addition to being in use for practice and lessons every day, the pitches host competitive matches on Wednesday afternoons - typically five rugby matches, two lacrosse matches, four hockey games and a cross country running competition - as well as a busy weekend competition schedule. My team of groundsmen also supports the greenkeeper in the maintenance of rough, semi and fairways on the nine-hole golf course, allowing him to focus his attention on the greens," says Steve.

In addition to the general routine, each season brings its own trials. "Autumn is particularly busy as, in addition to working maint

enance around the timetable, we're responsible for keeping the site clear of leaves. With a substantial number of mature deciduous trees within the grounds, this is no mean feat."

"However, it's snow that can generate the most work for us. During the heaviest snowfalls last winter, myself and a colleague were on site at 4.30am every morning to clear the driveway of snow and lay down salt to ensure the caterers could get on site and start work by 6.00am to serve the boarders' breakfast at 7.30am."

To enable Steve and his team to carry out their work to the high standards required, the school has a comprehensive range of equipment, a selection of which includes three 4WD tractors, four pitch mowers, one greens mower, three gators, two powered cricket rollers, a ride on rotary mower and seven trailers.

Whilst the day-to-day maintenance of the school's facilities is of paramount importance, there is also a need to continually develop and improve to ensure that Stowe School remains a leader among its competitors in terms of its sporting facilities. One such project is the recent replacement of the school's ageing athletics track with a new, state-of-the-art track to conform to UK Athletics performance criteria.

Specialist sports surface consultancy, Total Turf Solutions (TTS), was appointed to lead the project, from advising on the best solution and materials to meet the brief, through to designing the track and managing the contractors up to completion. Their thorough understanding of the task in hand was influential in its appointment as consultant, as Steve explains.

"We interviewed two potential consultants, but TTS stood out as they had a deep understanding of the task in hand and were

competitive on pricing. They had also recently completed a project to construct new sports pitches for us on existing agricultural land, so we knew the way they worked and were confident they could deliver the goods."

They recommended removing the existing Redgras track and excavating the area to allow space for the construction of a new eight lane track and field events area. The track construction itself would involve the installation of kerbs and sub-base, followed by a tarmacadam base, laying of a Polytan M Sandwich System track surface and lining of the track. Alongside this, a field events area and central grass area, to be used as a football pitch, were also to be constructed.

Due to the site's relationship with the surrounding National Trust land, extra consideration had to be given to the project's visual impact and the Trust consulted on every key decision, from the colour of the track through to the removal of any trees, as TTS lead technical consultant on the project, Dr Andy McLeod, explains:
"Stowe School provided a fairly unique challenge for us in that it's uncommon for brand new sports facilities to be built within the confines of landscapes protected by the National Trust. The old imperial track was not of sufficient size to conform to UK Athletics performance criteria, so the site needed to be extended to metric measurements, something which created challenges in its own right."

"One such challenge was the fact that a 200 year-old Ginko tree, one of just two in the UK, is located on the site where we were working, so special measures had to be taken to ensure its safety. We also needed to excavate an area that resulted in the need for a retaining wall to be built - however, the wall had to aesthetically fit within the existing landscape, and the solution we came up with was to use a timber crimp system."

"More generally, we had to make sure that any construction didn't affect the site lines between the various buildings and monuments in the area. By working closely with both the school and the National Trust, we were able to provide a solution that has kept all parties happy."