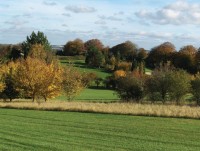 Ensuring year-round effective golf course maintenance can often be an uphill struggle for groundscare teams. Difficult soil types, drainage issues, invasive weed grasses, or simply having to do your best on a smaller budget can all impact on the task.

In private clubs, the relationship between committee members in charge of overseeing course maintenance and the groundstaff can, sometimes, make that undertaking even more of a trial.

So, for a grounds professional to enjoy the benefits of free drainage, good workable soil and an understanding committee would be fortunate indeed. Few might be able to make this claim but, for Darren Lee (right), Course Manager at Salisbury & South Wilts Golf Club, these joys are everyday realities and his cheery demeanour betrays that fact.

Darren began his career eighteen years ago when he clinched his first groundscare job at no less a venue than mighty Wentworth. After learning the ropes there he moved on to hold a post at Sunningdale Old Course, another of Britain's top sites.

His duties there, he said, set him in good stead for his current role at Salisbury & South Wilts Golf Club - a position the 38-year-old has held for the last three and a half years.

Salisbury & South Wilts is considered to be an archetypal English downland course setting, with its chalky, free draining soil and rolling countryside.

Two courses run side by side on land leased from the Earl of Pembroke, whose seat, Wilton House, stands majestically on the extensive estate. The original 9-hole Bibury course borders Salisbury Racecourse. The newer 18-hole course was built, in part, to ensure that members could be assured of golf whenever they wanted a round. When only the Bibury course existed, golf was 'out of bounds' on and around race days.

Both courses command stunning views of the surrounding countryside, with nearby Salisbury Cathedral presenting a magnificent backdrop. 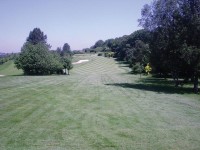 The club hosts a clutch of annual competitions, including the Pro-Am Tournament - which attracts many of the region's top professionals and European Tour players - as well as the Wiltshire County Championship and other fixtures.

"I decided to move to here because I felt I needed more responsibility, a higher position, and for the chance to run my own course, something I had always wanted to do," Darren recalls. "For me, this is the ideal job and the courses are perfectly suited to what our climate throws at them."

The enviable drainage at Salisbury & South Wilts allows year-round golf - a growing demand from the modern golfer. At a time when so much of Britain has lain under water after the November deluges, flooding has never presented a concern, insists Darren. "The chalk has the benefit of not drying out too quickly in the summer months, yet drying quickly enough to avoid any surface water sticking, which might interrupt play."

But Darren knows that beneficial soil types alone cannot alleviate the need for thorough maintenance regimes though, and he points to regular aeration, slitting, coring and microtining two to three times a year as the backbone of his yearly activities to keep the course in top condition.

"I'm a firm believer in the idea of doing things little and often," he says, "especially when it comes to aerating the greens. "I find that little and often produces the best results for us with the level of rain we get and the quality of our soil. Regular aeration is also useful for keeping thatch in check, and we only have very low levels of it thankfully."

Disease, or lack of it, is another factor playing on Darren's side. "Many clubs are plagued by fusarium, but we're generally lucky with our grasses. We've never had a bad breakout, and we are aware of the conditions that are right for it to thrive so make sure we spray a fungicide in good time." 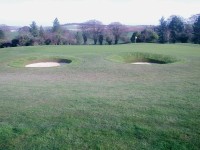 Over the winter months, usually before Christmas, Darren begins work on the bunkers - work is usually completed by March ready for the start of the new season.

Bunkering is arguably the only aspect of course maintenance that has proved a thorn in the side for Darren and the team. "On the rare occasion that members do have a moan about something, it's usually because of the bunkers," he says.

The cause of bunker problems on many chalk-based courses arises when chalk and flint penetrate the sand layer, preventing optimum playing conditions.

The remedy? "Upside down turf," declares Darren. The process involves laying turf with rootzone revealed in the base of the bunker, preventing grass growth while acting as a natural layer to shield the playing surface from chalk and flint show-through. "We find that this method works much better than artificial liners, which will often tear," states Darren.

Effective drainage is a bonus when creating or remodelling bunkers, Darren explains, because wet weather can hamper construction work. "Our lack of pooling on the greens allows us more time, than perhaps most courses would, to devote to bunker maintenance and good winter practice can often lay the foundations for easier work in spring."

As summer play beckons, Darren and the team start to lay their spring feeds with some light aeration on the greens, fairway feed and a selective herbicide. "We try to spray as little as possible as we recognise the need to reduce chemicals use," he says, "both to move with changing law and to keep up the strong environmental ethic at the club. The only insecticide we use consistently is Crossfire, which we spray once a year to control leatherjackets." 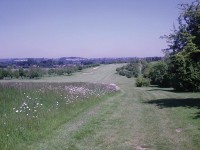 Conservation and other green issues are of mounting interest and concern in golf as clubs bid to shift the game's longstanding image of a destroyer, rather than a preserver of wildlife diversity.

The club has enthusiastically joined the trend of adopting environmentally sustainable principles by adapting some of its practices to help local wildlife thrive.
"We've let some of the rough grow and encouraged different wild grass species," Darren confirms, "which has allowed us to create a more varied habitat for wildlife to flourish. Twenty bird boxes have been installed across the courses and they are frequently used for nesting. We have our Little Owl resident on the 11th hole and two breeds of woodpecker. In addition there are a number of orchids and all manner of species of wildflower," states Darren proudly.

Some spraying becomes pressing though, Darren concedes. "We've managed, for a few years, to hold off on spraying for leatherjackets and worms but, this year, they came back strongly over the summer."

"We've also had problems with rooks, which like to peck in the rough for worms and other grubs, but there's little you can do though." 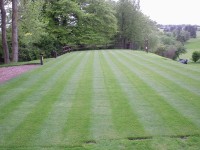 As demand for year-round golf rises, the technology golf courses employ to keep up with more intensive use of the course may need to be as modern and efficient as possible. Irrigation is a case in point because old, leaking and outdated systems can cost clubs time and money.

The club updated its irrigation in 2006 when contractors, MJ Abbott, installed a state-of-the-art system. The installation is centrally controlled by computer, giving Darren the facility to operate each individual spray head when and where he needs to.

"We can be far more accurate and less wasteful with our irrigation now," he states, "targeting only the areas that need watering at the correct times when we desire. Having a borehole for water abstraction also makes life a lot easier."

The relationship with the club is also a key consideration in the recipe for success, with trust ranking high on his list of priorities. "The fact that the club has real trust in my ability, and that of my team and that they leave us to get on with things, means I can focus on doing my job without fear of running into committee qualms."

"Too many clubs experience interference from committees, which often hampers progress," Darren stresses. "In my opinion there's nothing worse than people interfering when they don't really understand what's best."

Darren leads an eight-strong team, all of which hold the necessary groundscare qualifications. The club is fortunate in enjoying a generous maintenance and training budget, a factor that appealed to Darren when he came on board.

"The club are insistent that we all have the proper training - and half of the team also have spraying certificates. It's important to be knowledgeable about spraying, especially in this very sensitive climate. Having guys here that know the correct ways of doing it is a real bonus," he emphasises.

Salisbury & South Wilts is clearly a club that recognises the importance of investing in quality, demonstrated when it purchased a full range of Toro machinery. The club have invested heavily in both course machines and good on-site staff, with in-house mechanic, Dave Low, hailed by Darren as one of the best in the business, an area increasingly seen by golf clubs as a vital element of running a cost-conscious maintenance programme. 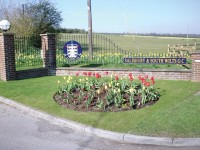 "He has a wealth of experience in machinery maintenance, which means we are able to do all our repairs in-house, even our grinding - something which can get expensive if outsourced," explains Darren.

With his eighteen years experience in turfcare, Darren has gathered some essential tips for being successful. Yet, as with most things in life, it's the simpler ones that often reap the fullest rewards. "For me, timing is everything," he insists. "Knowing what to do, and at what times, is a real crucial element of the job. Keeping tabs on the weather is perhaps the most important aspect though, as the weather is the greatest force controlling how and when we work. My job doesn't end when I step off the course either - keeping track of the long range forecasts and planning around the weather are part and parcel of being a successful greenkeeper."