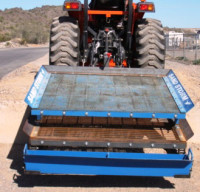 The latest version of the innovative Sand Storm will make its debut at BTME 2007. The Sand Storm is an innovative, simple, but effective means to recycle sand and other materials. The original Sand Storm was only launched in the UK in September 2006 - but a modified version was already on the drawing board at that time, with the UK market specifically in mind.

Principally aimed at the renovation of golf course bunkers, the sand storm can also handle other materials that may benefit from a screening process. Vibrating screens on the Sand Storm work to remove debris such as leaves, twigs, needles, weeds, stone and clay particles. The screens will also trap silt deposits on their surface, allowing for wash off and removal. The process remixes the sand particles and 'fluffs' it to a like new condition. Eliminating settling and compaction as well as cleaning away unwelcome contamination the Sand Storm can

Ownership of a Sand Storm allows this bunker management tool to be used little and often and the processing of all course bunkers to take place conveniently, overtime, producing and maintaining a 'like new' bunker condition. This can eliminate the need for costly sand replacement and storage, while improving bunker playability and condition for members and visitors alike.