0 The pluck of the Irish at Gort Golf Club

"One of the few benefits to come out of the cost cutting measures are the wild flora growing on the out of play rough areas, which are now not mown"

Gort Golf Club was founded in 1924 as a nine hole course. At that time, it was located in Rockfield, off the Galway Road. The lands at Rockfield were particularly prone to flooding and it was common during the winter months, after heavy rain, for the course to remain closed for long periods of time as it was submerged in water.

In 1974, after spending fifty years enduring such inconvenience, the club moved to a new location, at Laughtyshaughnessy. Here, the members could enjoy their golf in all seasons. But it soon became clear that this thirty acre site could not properly accommodate the growing membership. So, after spending twenty years at Laughtyshaughnessy, the club, in 1994, undertook an ambitious £1.3 million project which involved purchasing 130 acres of land at Castlequarter. The club was upgrading to eighteen holes and would take on the services of Ryder Cup star, Christy O'Connor Junior, to design the new course. In August 1996, the new championship course was officially opened and, today, the club boasts 700 members.

The course is set in a beautiful location, overlooking the Aughty mountains and Woods of Coole on one side, and the Clare hills and world famous Burren on the other. The course also lies within 200 yards of the historic monastic settlement of Kilmacduagh.

It is not surprising, with The Burren located only six miles away, that the land at Gort Golf Club sits on limestone. This allows the course to remain relatively dry, with only small pockets where drainage is needed. However, during the wet winter of 2009, the course did not escape the ravages of the floods.

The Course Superintendent is Peadar Grealish. Peadar started his greenkeeping career as a student, working in Galway Bay under Sean Keane. He went to Reaseheath College to study greenkeeping where he successfully completed his HND in Golf Course Management. In 1998, he began working at Gort and became Course Superintendent in 2000. Incidentally, Peadar's brother, Paudie, works as Head G 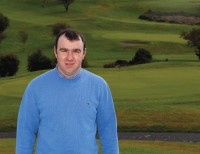 reenkeeper on the Castle Course at Lahinch Golf Club.

All the greens are sand based and were originally sown with creeping bentgrass. However, over time, the 'old enemy' poa annua has become the dominant species. There is no annual overseeding as Peadar feels that it is futile trying to establish a desirable grass species on greens that will always be dominant with annual meadow grass. "We simply don't have the financial resources to rid our greens of poa annua and then maintain them to keep it out. We maintain, to the best standards possible, what we have," he says.

Two granular feeds are given each year; 4:0:10 with 9% iron applied in February, and 14:0:9 in May. During the growing season, a liquid feed of 13:0:46, along with seaweed and iron is applied every twenty-one days. Phosphate is applied as, due to the limestone influence on the soil, it is locked and not readily available to the plant. Fungicide is applied every six to eight weeks all year round.

The fairways cover an area of sixteen hectares and, each year, two tonnes of Cal 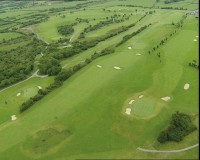 cium Ammonium Nitrate (CAN) is applied.

The greens are the only part of the course with an irrigation system. In times of very dry weather, a slurry tank filled with water is used to irrigate the sand based tee boxes. The source for the irrigation is from a 320 feet deep well and water is pumped to the lower lake in front of the 3rd green.

No one needs reminding of how the recession has affected golf clubs around Ireland. The West of Ireland, in particular, has been badly hit with membership levels dropping at an alarming rate. Gort Golf Club has not escaped the ravages of the recession and the consequential financial cutbacks on the maintenance budget.

Peadar has also been reduced to a three day week from November to March. Managing a course on reduced resources is not easy but, despite the cutbacks, the staff continue to work hard and remain loyal to the club - they have over fifty years service between them.

One of the few benefits to come out of the cost cutting measures are the wild flora growing on the out of play rough areas which are now not mown.

One club decision, that was reversed, was in the area of material cut backs. Two years ago, as a way of saving money, the club asked Peadar to reduce the amount of sand topdressing on the greens. The normal routine was for sand to be applied every three to four weeks. Peadar had to reduce this to every two months. The winter that followed found the greens to be playing very soft. After complaints by the members, Peadar explained to the club that sand topdressing plays a vital role in keeping the greens in good condition. After pointing out the important role that sand has on the putting surface, he was allowed to revert back to the monthly applications of sand.

Playing a round of golf at Gort is a very pleasant experience. The greens are in great condition, thanks to Peadar and his staff, and the views surrounding the course are breathtaking. I would strongly recommend you pay a visit.

This article first appeared in Greenside, the official publication of the GCSAI 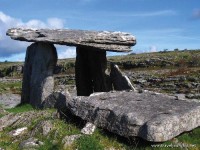 The Burren in County Clare is a karstic plateau - a stony chaos to the casual observer - with a full assemblage of the curious landforms that characterise such limestone landscapes.

The region encompasses 360 km2 of gently inclined plateau, with a further 200 km2 of lowland to the east of the plateau. The limestone also has a landscape in miniature etched into exposed slabs of rock. The bare surfaces (pavements) are fretted with hollows and channels where acidic rainwater has selectively dissolved the rock. An extreme example of these micro landforms occurs on the coast.

Often described as a natural landscape, the Burren has been profoundly influenced by human activities. Early removal of the natural woodland induced soil erosion, enlarging the exposure of the underlying limestone.

Ecological diversity is one of the great attractions of the Burren - a remarkable profusion that is now under intense pressure. More than 700 different flowering plants and ferns have been recorded and, although the Burren represents only 1% of the land-mass of Ireland, 75% of the Irish native species are contained in the area.

Plants from northern (Arctic) regions reach their southern limits, those from southern (subtropical) regions attain their northern limits, whilst plants from high mountains (alpines) can be found growing at sea-level; all three groups grow side by side - and in profusion!

The Burren flora advances through its seasonal displays between April and October, but even in mid-winter, there are flowers in bloom on the 'Fertile Rock'.

The Burren is a region of outstanding significance in an international context in terms of its geology, geomorphology, natural history and archaeology. Most of the area has been designated as a Special Area of Conservation under the EU Habitats Directive.

The people of the Burren welcome visitors to Ireland's most extraordinary landscape. It may look rugged, but it is also a fragile place and is always under threat from increased human activity. The limestone pavement, flora and built heritage are the resources on which tourism thrives. Respecting and conserving this resource is extremely important.

There is a Burren Code and, by following it, visitors can help protect the limestone pavement, plants and built heritage of this irreplaceable 'fertile rock'.