0 The power to perform-John Deere's, 'One stop shop'

The power to perform

At SALTEX 2004, John Deere will be offering a series of new machines. During the show you will be introduced to a range of tractors, Gators and zero turn mowers. Couple this with a next day parts service delivered by 8am and a range of new credit deals for 2004/5, and John Deere is able to offer a one stop shop for all your needs.

Here is a sneak preview of the ranges on offer.

The new range, which makes its public debut at Saltex 2004, lines up as follows:

John Deere's latest Delta Tier 2 low emission engines, featuring up to 30 per cent more torque, combine with the exclusive Load and MotionMatch features on the twin pedal eHydro hydrostatic transmission to provide improved performance in all conditions and for all applications. 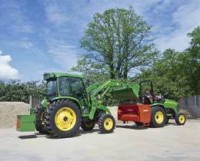 LoadMatch is an electronic power management system, similar to that found on larger agricultural and construction equipment, which maximises the available torque by automatically adjusting transmission speed under load. Not only is the necessary power always available for the job in hand, it also has the extra benefit of making it impossible to stall the engine.

MotionMatch makes it easier to switch between tasks such as loading, mowing or spraying and aerating, where different working speeds and transmission response times are required. The operator simply switches between pre-set speeds by pressing a button.

The 12 speed PowrReverser manual transmission allows smooth shifts over three ranges, as well as clutchless shuttling between forward and reverse, using a convenient dash mounted lever, which makes it ideal for loader operations. This is still the only true power reverser available on a mid-chassis tractor in the compact market.

Additional equipment such as the newly styled front loaders and mid-mounted '7-Iron' 60 or 72in rotary mower decks is equally easy and straightforward to hitch up and use. The John Deere loader's quick-change design allows fast attachment of 4-in-1 buckets, pallet forks, blades and a range of other implements.

Further features of the new 20 Series compact tractors include a choice of rear, mid and front PTO's, depending on model, an improved front hitch and PTO design, and a two-year warranty on all models. The large chassis 4320 and 4520 tractors are available from autumn 2004; the mid-chassis 3320 and 3520 will be on sale from February 2005, with the new mid-chassis 3720 model starting full production next June. 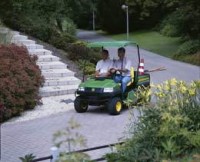 Now this already versatile family of utility vehicles has grown to include brand new compact and high-performance models, offering engines from 10 to 20hp, speeds from 15 to 25mph, towing capacities from 272 to 590kg and cargo area capacities from 182 to 408kg.

Ideal for all kinds of transporting, loading, hauling, dumping and general materials handling duties, the new Gators complement the existing petrol, diesel and electric powered vehicles, and feature the same established continuously variable transmission, which means there is no need for gear shifting or clutching.

'Gator' stands for General All-purpose Turf and Off-Road vehicle. These two-seater machines are ruggedly designed, agile and light on their feet, with a low centre of gravity for extra safety and stability, and a good power to weight ratio.

Measuring just under 96in long and 49in wide, the stylish CX Compact Gator is suitable for lighter capacity work in confined areas, at speeds of up to 15mph, without compromising overall performance. It features a 10hp Kawasaki petrol engine, two-wheel drive with diff lock as standard and internal wet disc brakes. 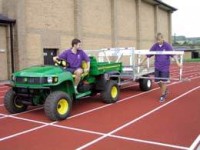 As on the rest of the Gator range, the adjustable, suspended high back bucket seats take two adults in comfort. The wide, low cargo box is easy to load, with a capacity of 182kg. Total payload is 363kg, and towing capacity is 272kg.

At the top end of the new Gator range, the HPX High-Performance Series models are designed to work in any environment, but are especially suitable for rough terrain, heavy-duty haulage and commercial applications. Powered by a 20hp Yanmar diesel engine, the HPX Gator is available with two or four wheel drive, and is equipped as standard with all wheel suspension, front and rear hydraulic disc brakes and a two speed high-low continuously variable transmission.

The vehicle is based on a new hydroformed steel frame for increased durability, and features a 409kg steel cargo box and a payload/towing capacity of 590kg. Capable of travelling at speeds of up to 25mph, the HPX Gator can be supplied with an optional ROPS canopy or cab if required.

Further optional attachments for the new Gators include a wide range of tyres, a road kit, rear hitch, utility trailer, front and rear blades and a winch. Other manufacturers, such as Logic Manufacturing of Hexham and TFM Engineering of Kendal, sell a number of specialist attachments to further increase the Gator's versatility. These include seeders, sprayers, spreaders, trailers, line markers, snow blowers, containers and tool holders. 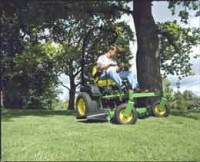 When full production starts in February 2005, customers will have the choice of a 19hp Kawasaki petrol engine on the 717 model, or a 30hp Yanmar diesel engine 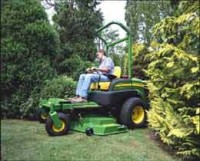 John Deere's special '7-Iron' mower decks feature a deep design with increased airflow so that more grass can be cut more easily, especially in heavy or wet conditions, and the operator can mow at faster speeds. Grass build up and clumping are reduced, greatly improving performance, productivity and cut quality.

Initially the 717 will have a 48in side discharge deck as standard, while the 997 will offer a choice of 60in side or rear discharge decks. The mowers are controlled using responsive dual steering levers, and the operator platform includes a deluxe high back suspension seat with armrests for extra comfort. A folding two-post ROPS and seatbelt are also fitted as standard.