0 The quest for golf green performance 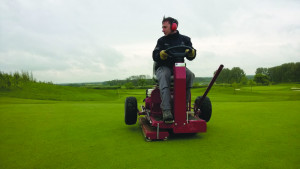 Will regular rolling carried out on golf greens, whilst maintaining sensible heights of cut, provide more than adequate playing surfaces for golfers to chip, roll and putt on?

There seems to be increasing misconceptions that close mowing at heights as low as 2mm is the answer to green speed, firmness and trueness. We need to ask the question, just how fast do greens need to be?

On a recent visit to St Andrews, the home of golf, I was surprised to learn that green speed was consistently maintained and measured with the stimpmeter at a roll distance of 9.6ft.

Close mowing golf greens at heights as low as 2mm, and then rolling the putting surface, is becoming increasingly popular and can produce a really fast surface. But this is simply not sustainable greenkeeping. Cale Bigelow, a Purdue University agronomist and turf expert, stated in 2007 that 'When you remove that amount of leaf surface area, you're removing the food production part of the grass plant'.

When greenkeepers prepare greens for play, It's worth taking into account climatic conditions such as wind, levels of precipitation and of course evapotranspiration (ET) rates. A simple rise in wind speed could quickly increase the ball roll distance and increase ET rates, contributing towards a putting surface that can at times become difficult for the golfing customer to chip and roll on. On fast greens, a gentle putt sends the ball many feet, while a putt on a slow green will travel less distance. 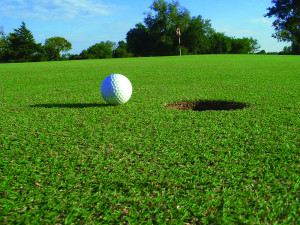 As sports turf professionals, charged not only with producing the putting surface but responsible for carrying out the course maintenance regime within budget constraints, it is possible in most instances to decrease the mowing frequency or increase the mowing height and not lose the green speed. Research carried out in 2005 concluded that dedicated greens rolling equipment can increase green speed by over a foot, and retain over six inches for as long as forty-eight hours (Nicolai, 2005).

The obvious benefits in this scenario would not only be less stress placed on the grass plant, but, financially too, as the need to locally irrigate dry spots with wetting agent would be reduced and, of course, the operational cost of dedicated mowing equipment.

There are further benefits to greens rolling and these can be seen in the level of trueness which is immediately apparent.

In the quest for green speed we should consider the fact that rolling frequencies can have an adverse affect on turf grass quality. This is evident in the thinning of the turf grass on putting surfaces, rolled frequently between four to seven times per week over longer periods, and therefore only recommended for short term use; for example, tournament preparation for the scratch golfer.

Again in relation to sustainable greenkeeping, we can roll at lower frequencies for extended periods and achieve more than adequate green speeds without affecting turf grass health (C. Hartwiger, 1996). Courses that are consistently kept in championship condition cost substantially more to maintain because of more frequent mowing, reseeding, irrigation and other factors (C. Bigelow, 2007).

Compaction levels are perceived as being problematic, however modern rolling equipment and increasing constructions of United States Golf Association (USGA) specifications (1993) or sand based root zone constructions have literally ironed out the issue of compaction. Research has shown that bulk density is not affected on USGA greens, although rolling does increase the bulk density of traditional push up style greens in the first year of rolling. 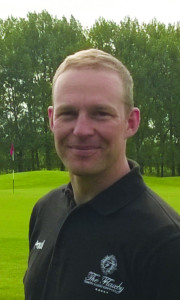 During the dormant growth periods, we can use dedicated greens rollers in place of mowing equipment to achieve an adequate and consistent green speed.

This will also allow the greenkeeper to raise the height of cut. The grass plant can then better utilise the shorter photoperiod available during the winter months and make best use of the limited daylight hours.

An increase in leaf blade size is directly attributed to the plant's ability during the light reaction to produce Adenosine triphosphate (ATP) and Nicotinamide adenine dinucleotide phosphate (NADPH) molecules which carry energy around plant cells, and during the Calvin cycle or dark reaction where ATP is used to add the hydrogen from NADPH to carbon dioxide from the air to form carbohydrates for the grass plant.

To end on the subject, I ask you again, just how fast do your greens need to be? Of course, taking into account the handicaps of the majority of golfers in your membership.