by External source
in Machinery & Mechanics
on 07 Aug 2019

Very few lawnmower brands can claim to have as vast and rich a heritage as British lawn mower manufacturer Hayter. They have designed and manufactured quality lawn mowers at their headquarters in Hertfordshire since 1946 and are proud to hold the Royal Warrant for supply of horticultural equipment to Her Majesty the Queen. Part of the Toro company since 2005, Hayter and Toro have together been able to redefine modern lawncare. 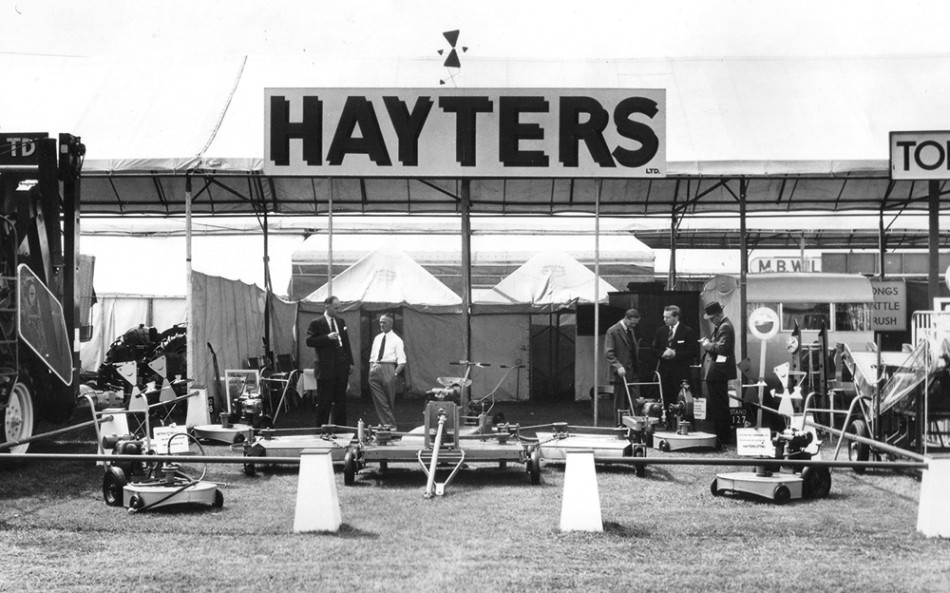 The story of Hayter lawnmowers is one born from humble beginnings and a huge passion for engineering, driven by its founder Douglas Hayter. Born in Bishop's Stortford on the borders of Essex and Hertfordshire in 1914, Douglas Hayter started his working career as part of a touring air circus, where he found his passion for engineering through servicing aeroplane engines. He also spent part of his early career in the building trade, where he started his own business in 1938, erecting workshops and sawmills as well as manufacturing cattle yard equipment.

The venture into lawnmowers began in 1946, when Douglas Hayter borrowed a cutter bar mower from a friend to clear some space for a new office building. The progress of clearing the ground was slow and frustrating, and soon he had imagined a more efficient and time-saving design. Douglas combined the functionality of the historical horse-drawn rotary mower - an invention from a hundred years prior, with a second hand two-stroke engine. The first ever Hayter rotary lawnmower, complete with a dustbin lid over the rotor was born, and so was the story of the quintessential British lawnmower.

The lawnmower Douglas had designed for himself worked wonders and, before long, he started getting requests for more machines from admiring neighbours and friends.

Later that year, Hayter became incorporated as a limited company and the new Motor Scythe Douglas had created went into full production the following year. It was a hand-propelled motor mower with a 24" cut. Further work was done on product developments, such as a safety stone guard which was fitted to the mower deck. When supplies became more readily available towards the end of the 1940s, a four-stroke Villiers horizontal crankshaft engine was used for the already popular Motor Scythe. 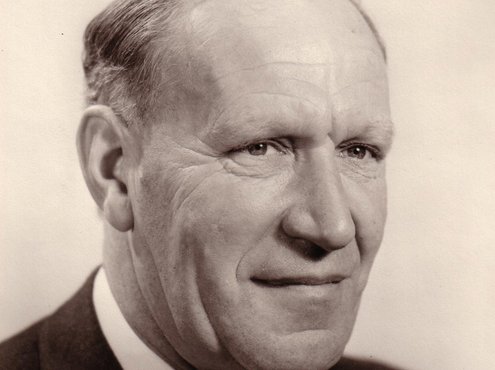 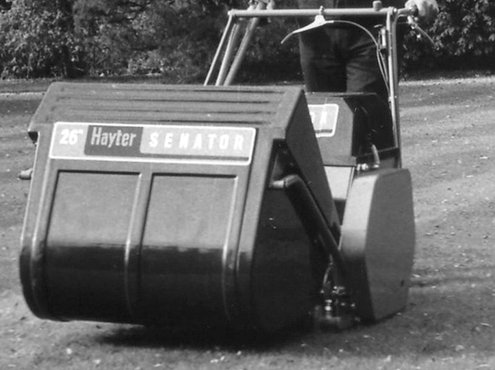 Customer requirements and demand saw the development of professional mowers, such as a 5' and 6' cut rotary orchard lawnmowers, a 6'6" cut tractor mounted highway mower, as well as the first self-propelled 25" cut Hayter Scythe.

In 1957, the domestic market saw the introduction of the iconic red and silver Hayterette, a hand-propelled 18" cut mower with a 98cc Villiers engine. This model quickly became an iconic offering in the Hayter product family and was awarded the BAGMA award for 'Best Horticulture Machine of the Year' in its 10th year of production. It quickly became a popular and iconic part of the Hayter product line-up and remained so until the last ever Hayterette was sold in early 2019. The 1950s also saw Hayter Ltd. develop the self-propelled roller drive Hayter mower range, which creates the perfect, picture-book striped lawn, now synonymous with the Hayter brand.

In 1960, Hayter's company received one of the country's finest business accolades, being granted the Royal Warrant for the supply of machinery to HM Queen Elizabeth II - an honour retained to this day. The 1960s also saw continued expansion of the Hayter business with the acquisition of Loddon Engineering, a manufacturer in cattle yard equipment in Norfolk. The company took on the production of several other successful machines, such as the 'Mighty Midget', a piece of portable welding equipment, and the Hayter Boot Groom, an electronic sports boots cleaning device. A new 25,000 sq ft warehouse in Spellbrook was another key part of the extensive expansion taking place. By the end of the decade, the company had managed to establish a wide network of international distributors, selling its products to over 110 countries worldwide.

Hayter was able to invest further to see the launch of many innovative mowing products for both homeowners and commercial users. These included the Hawk and Hawk Major, which were especially designed to mow grass around tight stoned areas, and the Harrier rear-roller rotary lawnmower. The Harrier would go on to win the same prestigious BAGMA award received by the Hayterette decades before and was awarded the title 'Product of the Decade' in 1998, following a UK-wide dealer vote.

Many of the company's other products from this era were designed to help streamline the production process to make it easier and faster to manufacture and deliver high-quality products. One of these machines was the Hayter Container Lift, designed to lift off lorry containers to allow products and spare parts to be loaded whilst vehicles were on the road to improve their efficiency.

The 1970s also saw the introduction of the first-ever Hayter ride-on mower - the Bank Rider. It was one of the first rotary mowers with a hydraulic motor drive to the cutting deck and an offset operator's seat, which could be swivelled so that it remained level when driving across a sloping terrain. It set a new trend with more ride-on versions being introduced, some based on popular pedestrian controlled versions, such as the Hayter Frigate and the Hayter Eagle.

Other products launching in the 1970s were the Hayter Senator 26" and 30" hydrostatic drive cylinder mowers, and 20" cut Ambassador 3 with five- and ten-blade cylinders with the new Briggs & Stratton Quantum engine. 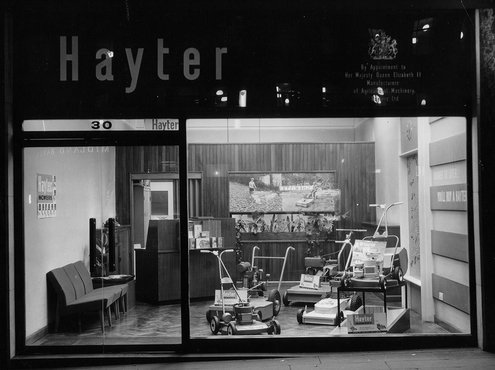 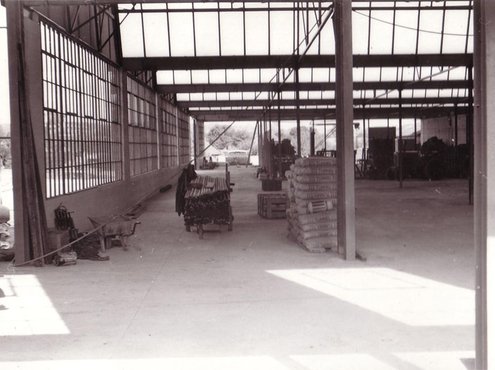 The 1980s began with the introduction of the Hayter Hobby, a mower complete with plastic grass box designed for small and medium sized lawns. The Hobby was also introduced as self-propelled and mains-electric versions in the years that followed.

In 1985, the company saw a large re-brand with a change of the logo and colour scheme to today's iconic dark green and black colours. The same year, Douglas Hayter sold the business to financial holding company F. H. Tompkins. They went on to acquire Beaver Equipment Limited, a manufacturer of commercial grounds care equipment based in West Sussex, as well as Murray Ohio Manufacturing Co., which was the world's largest mower manufacturer at the time. These acquisitions saw new knowledge and expertise feed into the Hayter brand and its products. In the years that followed, the business also saw significant investment in its manufacturing facilities, which were completely re-designed and brought up to date to allow for new products and models to be manufactured. This investment also made it possible to expand the commercial grounds care business to which the company introduced a significant range of ride-on cylinder mowers and tractor pulled machines.

In 2005, Hayter was acquired by the American-owned Toro Company. The Toro Company boasts an equally rich history of offering innovative turf maintenance equipment and irrigation around the world. Toro supplies their specialist turf management products to international sites and events such as, Real Madrid Club de Fútbol in Spain, Walt Disney World® Resort and the Wimbledon Championships, among many others.

The two companies have their individual merits and specialisms when developing new products, but have in the years since the acquisition very much looked to work more closely together. The companies have been able to establish a rich exchange of expertise and technology, and the result of this was revealed in November of 2018, when Toro showcased the new ProStripe® 560 mower for the first time at the NEC.

The ProStripe is aimed at premier sports venues, municipalities, resorts and golf clubs, and combines the benefits of a precise cut and striped finish seen in larger professional mowers, with the simplicity of a walk power mower.

The Toro ProStripe combines its all American roots in premier turf management, with the British understanding of high precision cutting technology, very much synonymous with Hayter. The model is the next step in Toro's mission to design and produce more equipment locally in the UK, to further build the international strength and significance of the UK mower and garden equipment industry.

Anthony Nadalin, Senior Marketing Manager for Toro Europe said: "We understand how important it is for turf professionals to have the right product for the surface they are working with." 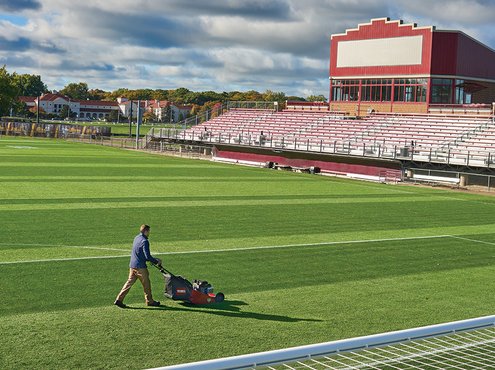 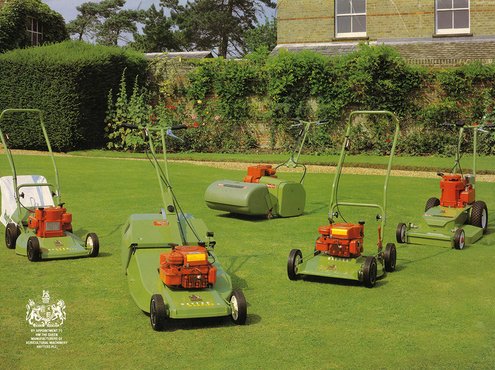 The ProStripe in action

"Innovation has always been at the heart of both Hayter and The Toro Company and we were excited to see how our different backgrounds and areas of expertise could work together to develop new and exciting products. It is through this desire for sharing and building on our different strengths that we have created the Toro ProStripe. It has been a very collaborative project between our two companies and the result is a Toro mower designed and manufactured in the UK particularly for the UK sports market."

"We are excited to continue to apply this collaborative approach to our future projects and deliver more innovative, high quality products from Hayter and The Toro Company. Just like Douglas Hayter's first-ever mower, we strive to break new ground across the lawncare industry and offer the best equipment, whether you're a keen home gardener or a professional groundskeeper."

For more information on Hayter, The Toro Company and their products be sure to visit:
www.hayter.co.uk I www.toro.com/en-gb