0 The Race That Stops A Nation 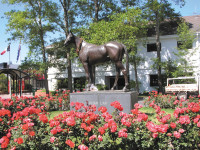 Standing at the entrance to Flemington Racecourse in Melbourne, Australia is a majestic bronze statue of one of the country's greatest sporting icons. Indeed, there is a case for saying that he is the most famous sporting legend of all in a country that is awash with sports stars. For, as far as we know, he is the only one who has been stuffed and has become the main attraction at the city's museum - and has been for the last seventy years