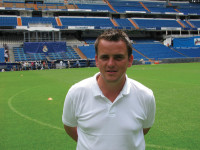 With temperatures rising towards 40 degrees centigrade for much of the summer, looking after Real Madrid's training ground complex and main stadium pitch can become a fraught experience. Certainly, during the hottest part of the year, preventing rye grasses from wilting and dying back in the heat of the day is a challenge, but one that Paul Burgess is keen to face.

It was a quite amazing decision to up roots from the secure surroundings of the newly built Emirates Stadium, and a club that he'd been with for over ten years; but that's what Paul did, by taking on the role of Grounds Manager at, arguably, the biggest and most well known club in world football, Real Madrid.

Paul's appointment went clearly against the grain of typical European stadium pitch management, where most clubs outsource all stadium maintenance to a company, and they tend not to employ experienced groundstaff, unlike the UK. Instead, each club is reliant on an external consultant to make the decisions and prescribe the works plan.

At Real Madrid, Paul's staff are still from outsourced labour and, whilst it's a different system, it does have its advantages. If there is a need to get in extra hands for a specific job or event, then Paul just asks the company for more people. If a worker isn't doing a good job or doesn't get on with Paul, then he/she is replaced. I say she, because, when I visited Paul recently, some of his staff were female. 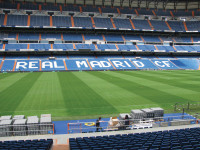 Going to the Bernabéu is a lovely experience, given the famous history of the club but, to walk out onto a honed carpet of rye/smooth stalk that, historically, didn't live up to similar expectations as the team, was very satisfying.

In the seventeen months or so that Paul has been in charge, the quality of the main stadium pitch has improved. So much so, that even the national papers have featured it. The players have commented on it and inferred that it has made a big difference to the way they play.

Often, when the new President is elected, it's out with the old and in with a new staffing structure, and it can be difficult to maintain any sort of equilibrium within the club. However, the dramatic improvements made by Paul, has gone a long way to securing his future.

The Ciudad Real Madrid is the new training ground complex, purpose built near the airport, outside of Madrid. It is quite an amazing complex of natural and artificial pitches, nearly all are surrounded with their own grandstands and floodlights. Within the complex there is also the Estadio Alfredo Di Stéfano, an 8000 seat mini stadium used by the 2nd division side, Real Madrid Castilla, in many respects the Real Madrid reserves. 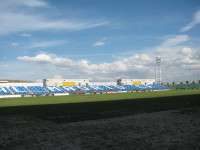 In all, Ciudad Real Madrid covers 1.2 million square metres although, to date, only 21,578m2 has been developed.

When I was there, the pitches were in various states of renovation or construction. The 1st team pitch was in the process of being returfed after a five week construction, which included the installation of a new undersoil heating system. This system was split so that parts of the playing surface could be heated independently. 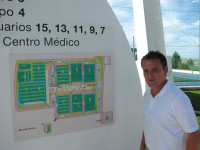 The main contractor was SIS (Support in Sport) and they have been involved in the works at both the training ground and the Bernabéu for the last twelve months, working closely with Paul to improve and create consistency across all the playing surfaces.

The pitch also had additional sandy rootzone spread and graded to improve the depth of material and, therefore, the drainage capacity.

Two days before I arrived in Madrid, Jose Mourinho had been unveiled as the new club coach and, while I was watching the big roll turf being laid, he came and stood by his office window to view proceedings. Not wanting to waste any time, Paul quickly arranged a meeting with the new manager to find out his requirements, and to discuss any concerns Paul may have had with them.

While there has been a great deal of money spent so far, it was necessary to bring the playing surfaces up to, what Paul regards as, Premiership standard. The previous constructions were inadequate. In many cases, at the training ground, there is and/or has been insufficient depth of rootzone to allow for free draining surfaces. The depth of rootzone has meant water being held in suspension and creating waterlogged pitches in the winter time. To add to the problems, the majority of the existing pitches were also inhabited with 100% Poa annua.

Paul concedes that, for around two months of the year, during the hottest period, he'd be better off with a warm season Bermuda grass to survive the intense heat but, for the rest of the year the sward mix of rye and Poa pratensis (smooth stalk meadow grass) performs admirably. Madrid is at quite a high altitude and, being inland, has an extreme range of temperatures between the sub zero winter months and the arid, hot summer months. 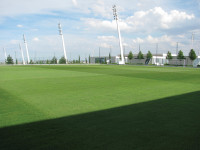 Rainfall is relatively low and all the pitches, including the synthetic surfaces, have automatic irrigation installed. Paul has two shifts that work at the training ground, a morning and an evening shift and they include irrigation experts who monitor the moisture levels. This is on top of sensors that also detect drop in moisture content and automatically top up the pitches.

Disease is a problem with the heat and the grass varieties used, so any incidence of fungal activity has to be checked immediately. Paul has seen Pithium wipe out half of a pitch in as little as forty-eight hours, so he's now on a programme of preventative control, but it's not as straightforward in Spain to use certain chemicals as it is in the UK.

Paul has also gone through the machinery inventory at both the main stadium and the training ground. Previously, the machines available were inadequate, including a 5 gang fairway mower and a 18" pedestrian scarifier. He has brought in Dennis pedestrian cassette mowers, ride-on triple mowers, tractors, topdresser and aeration machines.

The working ethos that has been Paul's life at Arsenal, was a massive culture shock for his new staff in Madrid and, initially, it caused unrest and problems, trying to get them to work to the standards that Paul insists upon.

But, as always, the proof is in the pudding, and now the team can see the improvements made to the playing surfaces over the last year or so, they are a much easier group to organise. 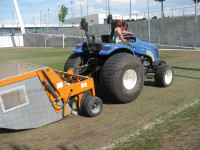 4) Supply, install and infill of SIS synthetic carpet to pitch perimeter and new technical area, including stone subbase. This is to aid maintenance around the pitch perimeter netting and to give a tidy, professional finish to the pitch. 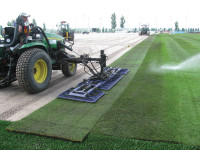 Works to pitch 4 were completed over a period of twelve days working within specific dates, security restrictions and tight space restrictions for material deliveries. SIS have recently completed the same work on Pitch 3, but with 40mm turf rather than seed.

4) Supply and install undersoil heating pipe system to whole pitch. The heating pipes were installed over a period of 4 days.

5) Supply, install and infill of SIS synthetic carpet to pitch perimeter, including a new technical area, all of which included installation of a stone subbase.

6) Supply and install of new goal posts and ground sockets. 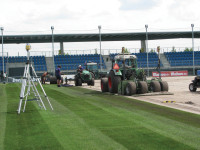 8) Install turf using SIS specialist kit over two days during temperatures of 30 degrees. Constant irrigation was in place during the installation.

Previous work at the Bernabéu Stadium

During the summer of 2009, SIS removed the existing Grassmaster pitch in the Bernabéu, through a process which allowed the rootzone material to be re-used, along with a small amount of new sand to reconstruct the pitch profile. Irrigation and heating systems were renewed. Turf was harvested and transported from Germany. All work was carried out with very tight access and space restrictions, along with time limitations, worsened by new player signings taking over the stadium and pitch area for a few days!

"SIS have undertaken a number of projects here at our training centre," says Paul Burgess. "This involved large amounts of material, restrictions with timings, dates, access and security and, yet, they were able to complete work on time and budget, and to a high quality - an essential combination when working for Real Madrid. I'm pleased to say all works met the high standards that we set, and a great deal of thanks must go to all involved in the sis project team."

George Mullan said; "Working for Real Madrid at their state of the art training centre has been an exciting challenge, and we are pleased to have been able to assist in providing some of the best training pitches in Europe for some of the world's best players. Thanks must go to Paul and his team at Real Madrid for their help and assistance during the works."

"We have a long working relationship with Real Madrid and look forward to continuing this, and are already in discussions about more works to pitches at the training centre this autumn."

"Having previously installed the turf at the training ground five years ago, following construction by a Spanish company, it was great to see as a working facility and how well the site had progressed. Working for a prestigious club like real Madrid is always an exciting challenge but, ultimately, a very rewarding one."