0 The Redexim Carrier is a lighter weight alternative power source

Demand for the use of sports turf surfaces has risen exponentially over the years with year-round playability becoming the norm. To cope with this increased requirement, maintenance practices have had to adapt to keep that turf in top condition with a considerable amount of changes to established practices being seen. 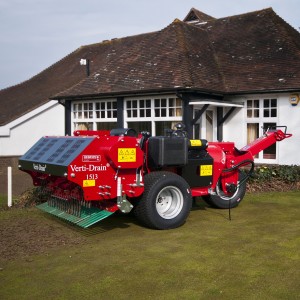 No more so than in the area of semi-synthetic or hybrid turf surfaces - like the Desso Grassmaster system widely used in professional football stadia. This playing surface is susceptible to ground pressure and in a direct response Charterhouse Turf Machinery introduced the Redexim Pedestrian Carrier. This power source is helping Burnley FC take care of their Desso pitch.

Paul Bradshaw, Head Groundsman at Burnley FC, took delivery of a Carrier and Verti-Drain 1513 earlier this year. He takes up the story, "The desso pitch we have is now into its 6th season and was starting to get quite firm and tight in the top few inches. The aerator we were using was beginning to struggle and we were getting reliability issues, which didn't help us to achieve the uniform aeration we needed. When looking to replace it the problem of weight came into play. To get a machine man enough for the job came with a power source problem - a high HP tractor carrying lots of weight. Charterhouse came along to demo the Verti-Drain 1513 hooked up to their pedestrian Carrier and it was clear that the combination was more than powerful enough to do the job, at full depth, with no problems. It's simple to operate and quick too - we can cover a full size pitch in just 2-3 hours. We are having 3 new desso pitches installed at the training ground shortly, and with their popularity in the industry, I can say that more clubs need machinery like this."

The Carrier is a pedestrian controlled, 3 wheeled hydrostatic implement carrier powered by a 32hp
V-Twin petrol engine. It has its own 3 point linkage and PTO and is capable of carrying a wide range of Redexim implements. It can be supplied with either treaded or smooth turf tyres; keeps ground pressure to a minimum and allows the turf professional to carry out the required maintenance. Other popular combinations see the Carrier teamed up with the Redexim SpeedSeed 1200 and the Redexim Verti-Top 1200, or indeed any other manufacturers machine which falls within its lift capacity.

The high-speed Verti-Drain 1513 is a popular choice for use with the Carrier and this combination really comes into its own when used on the naturally dense and harder hybrid surfaces. The well-known abilities of the Verti-Drain of penetrating tougher soil profiles whilst leaving an undisturbed surface are put to good effect on this type of pitch.