"After a new drainage system had been installed", explained Richard Campey, "we used the Koro Field Top Maker to remove the top one inch of soil, which was like compacted plasticine. This levelled the ground and removed the annual meadowgrass present, allowing the desired grasses to flourish in the new root zone. Now at the end of every season we only fraize-mow the surface.

Ko Rodenburg, the inventor of the Koro machines, was a special guest. As Parks Superintendent of Rotterdam City Council, he developed them as cost-effective units that would rejuvenate turf mechanically, without the use of chemicals.

Following an excellent buffet, the hundred and fifty or more Groundsmen and Greenkeepers were entertained by the afternoon's speakers. 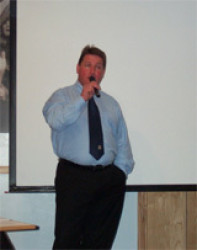 "Groundsman must knock on their treasurers' doors to request funds for regular renovation. Equipment like the Koro machines are a revolution in turf care. What used to take months can be done in days." He said that it was vital to test the pH of the soil and to analyse its structure before renovating to ensure that new materials applied would match.

David Rhodes, an independent natural and synthetic pitches consultant, agreed that both types had roles to play. "I was at Newcastle United recently and asked former player Peter Beardsley about artificial turf. He answered that professionals wouldn't touch synthetic grass except to overcome the worst conditions. However, many reasons given promoting real grass are subjective judgements of playability and aesthetic qualities. What's needed are more objective systems of measurement allowing meaningful comparisons."

David Rhodes explained that 'third generation' synthetic systems are now available. First installed in the mid 1990s, they feature a sand and rubber crumb infill. "700 such pitches were laid last year alone in Europe, and FIFA and UEFA are inaugurating pilot studies. But I believe questions remain unanswered about long-term maintenance and life expectancy. They are also football-specific, restricting their use for other sports."

Delegates were enthusiastic about the day. David Hulme from the Grange School (Northwich, Cheshire) described it as "Excellent. I saw machines I've never seen before." Joseph Pemberton, Deputy Head Groundsman at the Carrington training ground used by Manchester United said, "It's been time well spent. The speakers were excellent and I'm impressed by the breadth of kit that Campey's supply."

Joe Vodehnal had travelled from the Czech Republic to attend. An IOG member, he has been to Macclesfield several times and knew of the local football club. "The transformation in the pitch since Koro machines have been used is tremendous. I wanted to see how it's done. They really are revolutionary, combating problems mechanically, not chemically". Another contracting company travelled from Spain, showing that Campey's fame is spreading.

During the "Innovation in Renovation" event, Campey Turf Care organised a Charity Raffle with prizes donated by Macclesfield Town and Blackburn Rovers including autographed shirts and a signed football. Over £230 was raised, which is being sent to the East Cheshire Hospice.