by Charlotte Eglington
in Industry News
on 01 Aug 2013 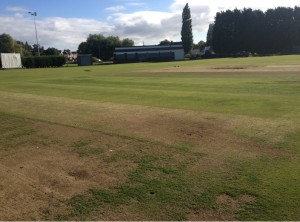 As the Premier club in its area, fielding 5 league sides every Saturday, 2 sides every Sunday and 2 sides every Thursday throughout the season - in addition to a comprehensive junior section from U9s to U17s - Nuneaton CC's Weddington Road ground sees considerable use.

To help ensure its natural table stays in good condition the clubs has, for the past 7 years, employed the services of cricket playing surface specialist total-play Ltd to undertake end of season maintenance tasks and support the club's grounds management team.

In autumn 2012, however, it became apparent that a more comprehensive programme of works would be required to help alleviate issues with the surface as Dave Button, the club's Head Groundsman, explains: "For several years now our grounds management programme has all been about maintaining the playing surface; which was evidently successful as existing issues weren't getting any worse.That said, they also weren't improving significantly, so I asked David Bates at total-play for his thoughts as to what we needed to do to physically improve the table for the future." 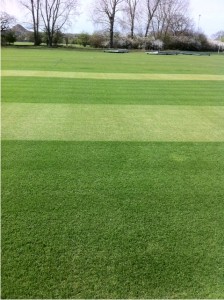 pitch advisor to the IoG and ECB under his belt, David's in-depth knowledge of natural cricket pitch processes made him ideally placed to advise. He says:

"The key issues at Nuneaton's ground were a high percentage of the wrong grass species and a thick organic matter layer; the combination of which compromised its playability.

To help rectify this and ensure better performance of the table, I recommended carrying out square restoration works as defined in a natural cricket table processes framework we have recently authored.

"In Nuneaton's case we put together a tailored programme that included fraise mowing, surface levelling, sward establishment and change of top dressing.

We carried out all of the works on site in a single day at the end of the 2012 playing season and the square was ready for action again in spring."

According to Dave, the results have been impressive: "We've noticed a big difference in the square during the 2013 season. The works David proposed evidently did the trick and I'd recommend total-play as natural turf advisors to any club looking to improve their surface - the fact that they also have the in-house expertise to physically carry out the works is also a big bonus."