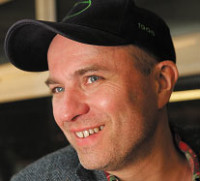 Just over 100 years ago Alex Richter's Great Grandfather started to grow turf for landscape use in his homeland of Austria. Today, Alex manages the company, producing around 300 hectares of turf between two farms in Austria and Slovakia.

The majority of the turf is now grown in Slovakia on a farm totalling over 700 hectares. The farm also grows wheat, maize and sun flower, although about 100 hectares is rented to another farmer. On these naturally good soils 240 hectares of turf is grown and matured ready for harvest.

The land was bought in Slovakia in 2000 after Alex and his father had come across the soil by accident. They had been driving to an agricultural fair in the Czech Republic in 1990 and had stopped en route to relieve themselves by the side of the road. Looking at the local soil, they were surprised at how sandy and free draining it was! They initially thought it was imported for some nearby construction but walked further into the field and saw that it was indigenous to the area.

It became a very complicated affair to purchase the land, due to the local laws and politics. Land in Slovakia had been shared within families over many generations and it took the Richter's, with three full time staff and nearly four years of research, to find the 800 landowners. Eventually they agreed contracts to purchase the parcels of land with nearly all of them. As many owners lived in other countries it was a long journey and is still ongoing with a handful of people. The smallest plot purchased was only sixteen square metres! 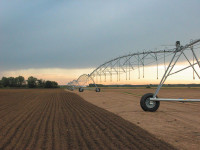 es they had come across from anywhere in Europe.

These are as near to a perfect rootzone as you could find. They were deposited in the valley during the glacial age. Typically the soil is 98% sand solids, and the rest is organic matter.

The natural stability comes from the unique mix of particles sizes and shape.

The silica sands were created from the Bohemian granite platform. Over hundreds of thousands of years the material was washed down by glacial melt water. The bigger rounded particles rolled down into the valley and were mixed with finer angular sands that were blown down.

When Alex took over the running of the farm from his father his focus was to produce top quality sports turf. For football (stadium turf) the predominant grass mix is 90% Poa pratensis, 10 % Rye, although smaller quantities of other mixes (including 100% Rye mix) are also produced.

The farm has also introduced all new bent varieties, Penn A4, Penn cross, Penn Links, providence, L-93 and alpha for the golf market.
They also grow a fescue/bent mix of 80/20, as well as about four hectares of pure fescue, which is now available for harvest. All of the turf is grown on this natural rootzone and is compliant with the STRI specifications for greens construction.

Alex follows strong principles in that all the sports turf is grown in the field for a minimum of two years prior to harvest, the two year period includes two winters which is important to help the plant be more robust. For certain varieties this also helps to encourage a good rhizomatal root structure and, for the others, a chance to grow strongly and have the best possible root system to survive the harvest and relaying.

The Slovak climate is continental, hot dry summers and cold winters with heavy frosts, the average rainfall is only 400mm per year.
The farm is equipped with good overhead irrigation systems. Water is drawn from local wells and fed from a central pump station through a sub-surface piped network to service the whole 700 hectare farm. The overhead linear systems used in Slovakia are not affected by wind and use smart technology to keep movement stable over a length of 400 linear metres.

The turf plots are grown in 100 hectares, and there are three independent systems to water the fields.

The particularly long and hot summer of 2006 meant that the irrigation was in near constant use.

Generally, water is not normally used excessively, instead the plant is asked to develop an excellent root system to cope well with drought. 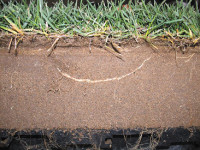 Although the indigenous rootzone is exceptional, for the football turf further sand is added. On newly cultivated ground prior to seeding, silica sands are added to improve the rootzone. Through extensive testing this mix is about as good as you can get without adding artificial fibre. The drainage rates sit nicely within the European Din Norm standards. The field is cultivated and prepared for seeding, rates on the new fields are very low, preferring time for plants to naturally colonise the spaces using the rhizomes to create new plants. This gives the grass space and time to get an optimum sward of strong healthy plants.

The field, whilst maturing, is then regularly topdressed with special silica sands to optimise shear strength and further stabilise the rootzone mix. On average the sportsturf is topdressed with around 8mm of sand during the two years of growing.

Alex believes that his company was the first to start topdressing fields with 100% silica sand, enabling top quality sports grade turf for football and golf.
As well as topdressing, intensive care is taken with the premium turf in terms of annual scarifying, and interim verti-cutting to reduce thatch build up and promote a healthy upright growth habit. 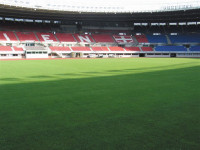 The Ph on the fields is an optimum 6.6 and turf is fertilised infrequently using low levels of nutrients. The philosophy is to allow the plant to be adept around low nutrition levels and, therefore, be able to establish quickly when laid in a new environment after harvest. Adding more nutrients would force cell building and provide a weaker plant structurally.

While all landscape and garden turf is grown more as quick cash crop, on 12-month turnaround, the sports turf ideology is to provide well-established turf that has had natural time to reach its optimum. This is important for stadium turf as it is usually harvested to go into a difficult environment. All the turf species used are specifically chosen for drought and shade tolerance. Loretta was actually found nearby in a local village.

The company have invested in good machinery and can lay big roll turf 122cm wide. They also harvest 75cm and small roll at 40cm wide. There is further investment due for harvesting equipment, and next year new office buildings and staff facilities as well as a new barn to store more equipment will be constructed.

The proof of Alex's philosophy is already on view at many major stadiums across Europe, where his winter sports turf stands up well to increased use and harsh stadium environments.