by Jane Carley
in Rugby, Synthetics, Industry News, and Football
on 01 Aug 2016

The Ricoh Arena stands proud above the city of Coventry, between its historic centre and the M6 motorway and surrounded by bustling retail and industrial parks. Its path to being a modern leisure palace which includes a casino, conference centre and hotel has not been without undulations.

Coventry City Football Club relocated from their Highfield Road stadium, their home since 1899, to the Ricoh Area in 2005 and the 'Sky Blues' have been based here ever since, apart from a season at Northampton Town's Sixfields Stadium in 2013/14. On returning to the Ricoh Arena the following season, they won their first match 1-0 against Gillingham in front of 27,000 fans.

In November 2014, Arena Coventry Limited (ACL) accepted a purchase offer for the whole stadium facility from Wasps Holdings Ltd.
A pressing challenge was that the playing surface now needed to withstand the increased playing hours required by Coventry City FC and Wasps RFC, so pitch surface specialist GreenFields UK Ltd was approached to provide a solution.

The company's head office is in the Netherlands, where its pitch surfacing products are more commonly supplied to independent contractors who install the pitches and may also offer initial or ongoing maintenance services. 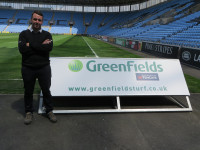 Ben Grigor, Grounds Manager for the company explains: "The approach is different in the UK, where we design and build the project, and have now added ongoing grounds management and maintenance services to the package."

The Ricoh Arena's owners recognised that the playing surface would need to offer the additional durability offered by a hybrid pitch but, with the new season looming, GreenFields installed a natural turf pitch as a temporary measure with an XtraGrass pitch planned for Summer 2015.

"XtraGrass was an ideal choice for the Ricoh as it gives the opportunity to improve standards with limited resources - there are just two groundsmen and the stadium does not have lighting rigs or germination sheets," explains Ben.

The hybrid system combines the positive properties of natural grass, with the fibres giving the visual impact needed for the television cameras, even in the depths of winter, whilst maintaining stability and minimising divoting.

An XtraGrass pitch is constructed in a fairly conventional manner, using a rootzone layer over a gravel raft or other drainage system, with the synthetic carpet installed 50mm deep and the chosen infill placed in a 35mm layer before the grass seed is sown into it using a tractor-mounted seeder. The system works with any grass variety, so mixtures can be chosen to suit the particular challenges of the stadium. In the case of the Ricoh, this includes a fully encapsulated stadium and the West Midlands' predictably wet weather.

The grass roots penetrate the carpet and can grow downwards into the rootzone, but the structure provided by the carpet means that, after installation or renovation, the surface is stable enough for a quick return to play.

"For rugby, the benefit is that the pitch is more stable in a scrum and maintains traction and stability, even when grass cover is lost as the season progresses," explains Ben. "The pitch also stays level in the goalmouths rather than 'bellying out' as a natural turf pitch can."
The surface can be maintained in a similar way to natural turf, including using sarrel rollers and aerators to the 35mm carpet depth.

"The Ricoh has such a busy programme that we have to plan maintenance programmes a little ahead of where they are needed so that we don't miss weather windows, but XtraGrass does facilitate this," Ben comments. "For example, we can aerate close to a fixture without affecting the stability of the pitch."

With the stadium in heavy demand for concerts and festivals - including performances by Rihanna and Bruce Springsteen this summer - the tight maintenance windows also include the annual renovation, with just five weeks scheduled to turn the pitch around.

After spraying with glyphosate to take out poa, the surface is Koroed with the universal header, which scarifies rather than digging, before aeration, topdressing and reseeding. This is scheduled to start on 27th June with the first fixture on 6th August. 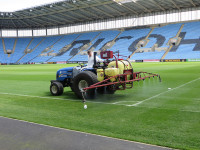 "Renovations should only take five days, but it doesn't give the grass long to establish afterwards. Fortunately, even if the plant is young, it won't affect play as we start with 7% of the surface to give the stability needed."

Winter 2016 will be particularly demanding as the Ricoh Arena will also host Rugby League's Four Nations in November, but Ben comments that it is a situation he is getting used to.

"The perception is that these pitches are only used at the weekend but, in the last week of the season, it hosted training and schools on the Tuesday, the Captain's Run on the Friday, youth training and warm ups. Coventry's league match and under-21s were palyed on the Saturday and Rugby League on the Sunday. There were no problems or complaints!"

'Double headers' with football on the Saturday and rugby on the Sunday are common, with all hands on deck to change markers and goals, water the pitch and attend to any divots. 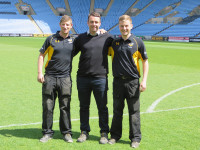 Ben explains that, whilst the maintenance regime uses conventional equipment and techniques, he is instigating a programme of regular performance testing, working alongside Head Groundsman Paul Currier Jr and Connor Brady.

"We test for traction, firmness, root mass and depth and resistance on a regular basis. Firmness is particularly important and we aerate to meet football and rugby standards. I'm also keen that we maintain high standards of general groundsmanship, such as restricting the weight of equipment used on the pitch where possible."

GreenFields has agreed a ten year contract with the Ricoh Arena, but Ben comments that there is no reason why the XtraGrass carpet should not last more than ten years if well cared for; "It only supports the grass, so it's the standards of groundsmanship that are important to get the best out of the turf. It's essential that clubs invest in their groundstaff because their commitment is crucial. We believe that there is a real advantage to the relationships that we are establishing with the clubs - they can hand over the care totally to us, right down to employing and working alongside the groundsmen." 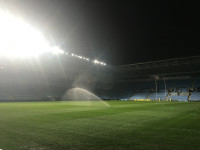 GreenFields and Wasps have both made a significant investment in the pitch at the Ricoh, with both parties benefitting from marketing agreements, including pitch boards and mats on site, plus an advertising campaign.

The next project for GreenFields in Coventry is a new pitch for the Broadstreet Training Ground at Binley Woods where Wasps is set to relocate its training activities this summer.

Ben Grigor is a firm believer that a committed, incentivised workforce is key to high standards of groundsmanship.

He began his career as a greenkeeper but, with the recession biting golf clubs in his native Scotland, secured an initially temporary role as a groundsman at Murray Park, training ground for Rangers, in 1998. 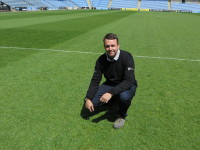 "I loved the challenges of groundsmanship and learnt an enormous amount in a short period of time," he comments. "The standards at Rangers were so high."

After three years, he secured a role at the Ibrox stadium, another demanding job with the low light levels and incessant wet weather.

But it was in the run up to the Euro 2012 tournament that he got chance to lead his own team, working with four students to improve pitch quality in just five weeks in the Ukraine.

"Team building was the only way to get the work done. Keeping staff morale high was essential as they were offered little respect by the tournament organisers - even little touches like arranging for them to have a good meal made all the difference."

On his return, he was contracted to maintain new pitches in Eastern Europe for the 2018 FIFA World Cup whilst training new groundstaff, which honed his skills further before he was approached by GreenFields to be Grounds Manager for Ricoh and Kassam projects.

"The task is the same wherever you are - to train and motivate groundstaff to work with often limited budgets to produce the highest possible playing surface standards."