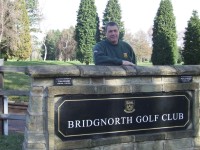 Martin Jones, who was born and bred in Bridgnorth, told me the one thing he knew, from a very young age, was that he wanted his working life to be outdoors. "My first thought was to get into the building trade but, just as I was leaving school, the company I planned to join went out of business. As a result, I found myself just where I didn't want to be; inside and in a factory."

"Then, after just two weeks, I saw an advertisement for an Apprentice Greenkeeper at Bridgnorth, applied and got the job. For me it was perfect; outdoor work and close to home. Thirty-three years later and I am still here."

Martin's commitment to Bridgnorth doesn't just extend to the golf club, as he is also coach of the very successful Bridgnorth Town FC youth team squad.
"When I started out, the initial training consisted of a week at the STRI in Bingley and a City & Guilds course. These days, I have four excellent qualified staff - my first assistant, David Clarke, who has been with the club thirty four years; John Carter, fifteen years; and Richard Millington and Joe Smallman, both with NVQ levels 1 & 2, and with eight and four years' service respectively." 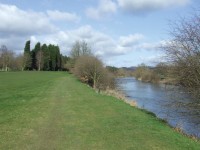 Sitting alongside the River Severn, the course was first laid out in 1889 by John Hughes of Caernarvon as nine parkland holes on land leased from the local Apley Estate and, until the 1930s, a cave in the rock and a changing shed were the only comforts provided for members.

Moving forward to the mid 1960s when the Dr Beeching's cuts to the railway infrastructure closed, amongst others, the Severn Valley line, the committee approached the estate to explore the possibility of leasing sufficient land to add a second nine holes. This was agreed, and the current 72 SS course opened in 1972 with an exhibition by PGA tour veterans Neil Coles, Malcolm Gregson, John Garner and Max Faulkner. Some older members still refer to the old and new nines.

One of the challenges for the golfers is the subtle difference in terrain across the course, ranging from dry spring turf on the holes furthest from the water, through springy, free draining land on holes overlooking the Severn, to the fertile silt generated meadowland on the holes immediately adjacent to the river.

"We cannot hide the fact that, from time to time, we do lose golfing days due to flood, but those incidences have definitely reduced in recent years. A few years ago, when we did have a number of very wet winters, particularly in North Wales, flood barriers were installed up-river in Shrewsbury and I did worry that we could be affected by a funnelling effect, but that has proved not to be the case."

"When the river does come over the top, it only really covers holes six, seven, eight, thirteen and fourteen but, unfortunately, as the holes involved are in what we call 'the loop', we do, in fact, have to close nine."

"The worst impact for us, as a greenkeeping team, is the first flood, which can deposit a huge amount of varying debris onto the course, to the extent that we have had to remove up to twelve full trailer loads. In the past, flood damage has also cost us the loss and repair of the fifth tee, which

was damaged to such an extent that we had to bring in outside contractors to carry out a complete re-build. One or two bridges have also been lost to the water and repaired over the years."

"The main impact on flood affected holes is inhibited growth, as any silt that is deposited caps and then dries hard. Where the flood affected greens are concerned, we take regular soil samples and have found that, over the years and provided we hollow tine and Graden, they do play equally as well as the unaffected greens."

"In 1996, we took the decision to embark on a five year programme to replace all eighteen greens as, at that time, they were generally too soft, and the various substrates we have on the course, from sandstone to silt, meant there was too much variance in condition and playability. On the 'new nine', we also have clay at eighteen inches."

"The programme was based on us carrying out the work ourselves and involved the replacement of four greens a year. We dug out the turf, installed drains, gravel and USGA specification rootzone and then, against advice taken at the time, we replaced our original Annual Meadow grass. Although, because of the five year plan, we did for a time experience variation from green to green, they are now acknowledged to be excellent, and we do regularly receive compliments from members and visitors alike. We were also advised to overseed, but I was against that. I am firmly in favour of this course being as true to its natural environment as possible. With that in mind, other than on greens, we try to use as few artificial agents as we can."

"My motto is to believe what I see, and not what people tell me. As we are generally a free draining course, I am happy to work with wh 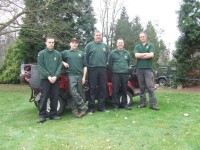 at I've got. Where the greens are concerned, we work with our materials supplier, ALS, to an agreed nutrients provision programme which, subject to weather conditions at the time, includes application of Advanced Foundation granules with seaweed in March, Advanced Generate granules in April, Premier Liquid in July and September, Lebanon Country Club granule in May, Maxwell Premier liquid in August and Headland liquid Turf Hardener, Seamac liquid Proturf and Headland liquid Turfite in October and November."

"Where cut heights are concerned, our general rule is 3mm for summer and 5mm for winter on greens, and 17mm summer and 20mm for winter on fairways. For tees we work to 13mm and, for semi-rough areas, it's 24mm. Last year, however, we were still on 3mm greens in October."

"Our location in the Severn Valley, surrounded by high ground and with the river next door, means that we can be subject to a wind tunnel effect and micro-climate. This can impact on our maintenance regime, so we make a point of regularly taking soil moisture and temperature readings and react accordingly." 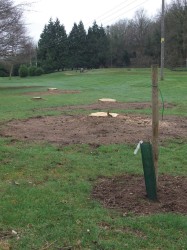 "Whilst we are comfortable with where we are now with the course, one particular area we are addressing, again with the local natural environment in mind, is our tree stock. As a course, we are not short of trees but, over the years, a number of fast growing species, such as leylandii, larch and poplar, have been planted for hole definition. We have now, following the advice of an ecology report, taken the decision to replace non-indigenous species with beech, ash and hawthorn hedging. The need for this work to be carried out was highlighted when we found that one particular species was diseased and in danger of infecting across the course.

Photographs taken from High Rock, a local landmark overlooking the course, proved to us just how dominant some non-indigenous species had become. We found that our local authority had funding in place for such work, so applied, and were successful. We are replacing around sixty to seventy trees a year but, last year, I think we planted around one hundred and twenty, plus about twenty metres of hawthorn hedgerow.

Where pests are concerned, which for us primarily means rabbits and badgers, we have adopted an unusual approach involving the utilisation of four police officers from a shooting club, who visit us from time to time and spend overnight on the course. One night, I understand that over three hundred rabbits were dealt with." 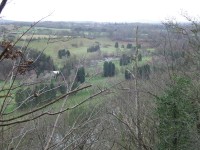 With regard to the tools of my trade, like most of my peers I have seen a tremendous amount of change over the years. I confess to being a Toro man and to loving my 3500D Greensmaster. When I started here, thirty-three years ago, we hand mowed the greens three times a week and raised cut height on a Thursday for the tees. Over the years, we have worked with a mixture of Toro and Ransomes but, now with just Toro, we operate on a five year maintenance lease contract. Currently, we are in the situation where our dealer has recently ceased trading, so we are working with Toro direct and waiting for a new dealer appointment."

When I parted company with Martin, I was left with the feeling that here was a man doing exactly what he should be doing. Working outdoors and in a place he loves. Also, a man who believes, come pestilence or flood, his role is to produce the best course he can and, more importantly, a course that sits comfortably in his home town's surroundings.