0 The Rolling Stones at Twickenham

A great experience and a fantastic time had by all

Unfortunately Mick Jagger fell ill in the week leading up to the show at Twickenham. He pulled his show in the Ajax arena in Holland on the Wednesday evening. That sent shivers down everyone's spine thinking 'here we go' but we were assured he was okay and we carried on with setting up regardless. On the Friday morning the stage management called us to say that he had got a throat infection or flu or something and he was not going to do the Saturday night performance but he would definitely be fine for the Sunday evening.

To be honest that took the legs from under us, it had been a great week, the production team, the Twickenham staff, my staff and the stage crew had had the most fantastic week, it was really building to this crescendo and it felt like somebody had ripped the rug from underneath us.

We got through the Saturday, a few people turned up, who had obviously got arrangements for hotels in London, they came 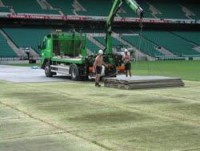 Working closely with our local council we put in place restrictions on both the stage crew and ourselves, operating a working curfew until midnight before packing in for the night. The Monday morning was the bank holiday morning; the pitch was just a hive of activity. There were riggers taking the stage down, there were people taking the seats out and there were lorries coming and going. Then there were my men and I, trying to keep abreast of the working crews and vehicles as well as keeping the litter at bay. 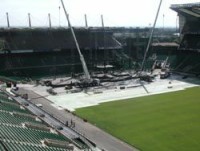 We viewed the damage, the pitch hadn't faired too bad, it was scorched and brown in a few areas, firstly with the weight of the stage, the stage was estimated at four hundred tons in weight and secondly with the heat. We had had such a great end to August; it was about 28 degrees in side the stadium on the Sunday for the concert.

Now we had nine days to get ready for the England v France Rugby International. The first job was to finish clearing the litter from the surface, then we brought the magnet out, the pitch was twice walked with an electric magnet to ensure there were no nuts, screws or bolts out there in the grass. We then hand raked, using rubber headed rakes, the entire stage area that is eighty metres by twenty-seven metres deep to help liven the grass up.

Prior to the concert set up, the weekend before, I had put some seed mixed with soil in black bags with a bit of water in order to pre-germinate some seed. Ian Ayling and Andy Muir, my assistants, and I set about applying this pre-germinated mix to all the brown and scorched areas. Using the rubber rakes, we knocked the mix into the sward, with the clear aim of rejuvenating the area. We also over seeded it with a Charterhouse disc seeder working in three directions and then aerated the area with the multi core using 15mm spikes.

Once all the remedial work was done we covered it with the Canadian grow covers which I think are the best, as they retain warmth and let the water and condensation through both ways. We had the work finished and the covers on by Thursday, by Friday it was raining and it had turned cold and I was thinking 'oh no!' Fortunately the weather brightened up over the following weekend and we took the covers off on the Tuesday, the pitch was responding well.

When we put the white lines on the pitch, the grass seemed to stand out even better. I decided to spray on a chelated iron, just to give it an extra boost.

We played France on Saturday, September 6th the pitch looked fantastic. The England players were chuffed to bits with the pitch, saying it was magnificent.

Due to Mick Jagger's illness the Stones were now arranging a return. September 20th was the concert day set for the new show. The Rolling Stones production team arrived on the 14th September to start setting up the giant stage again; Eve Trackway arrived to put the flooring down on the pitch and I just thought 'it's going to be raining, its September, this fabulous summer can't go on forever!'

But the record drought was set to continue and we enjoyed another warm, dry week. I stood on the pitch on the day of the concert and at five o'clock in the afternoon it was 26 degrees.

In that week leading up to the concert, the Trackway had arrived on the Sunday, and was installed by the Monday. The cranes arrived, we had three 70-ton monsters on the pitch erecting the stage again weighing 400 tons. The steel arrived, erected and held up the screens and the lights, and all of this was in place by Thursday afternoon.

show of the tour, I am assuming that they now knew where every last piece of steel, washers and bolts was placed. It was a joy to watch the methodical workmanship.

The show was on the Saturday and after the concert had finished the crews had to get the lights on a ferry by teatime on Sunday as they were going on overnight boat to Amsterdam, so that the Stones could play there on the Monday. By the midnight curfew the lights had gone, and the next morning the steel towers were off on the ferry from Harwich. By quarter to nine on Sunday night, any evidence of a concert had gone.

This time around there was more damage to the pitch, but nothing that couldn't be remedied. We followed the same remedial process as before, using the magnet, rubber hand rakes and brushing, also using a Quadraplay to tickle up the surviving grasses and get some light into the surface. We spiked it again, over seeded and fed it with a granular fertiliser. I used slightly higher nitrogen content in the feed to give it a quick boost.

The England team came into train under floodlights on the 30th September, before they left for Australia on the 1st October. In the next few weeks we host a few corporate events here at Twickenham, but our next big fixture is the Varsity game on December 9th. It seems a long time away and a lot of weeks but the full recovery of the pitch will partly depend on how many growing weeks we have left.

I've been here a year now and last Autumn I couldn't believe how warm it was compared to Manchester, we were cutting the grass well into November. Hopefully that will happen again. I'm confident I can make the pitch bounce back, it is always a learning curve, and a challenge and there will be another feather in our cap when we bring it round. I'm enjoying every second of it!

My remit now is to keep the surface open with regular spiking and keep the soil warm with the covers at night. We are removing the covers during the day allowing the sunlight on to the pitch.

From a personal point of view hosting such a large and spectacular concert at Twickenham has been extremely rewarding and without doubt a huge and triumphant achievement for all involved.

I have to look long term now, there will undoubtedly be some compaction, particularly where the cranes have stood and the forklifts have been running up and down. On one morning when they were de-rigging, there were five forklifts, two flat bed trucks and three cranes on the pitch, needless to say I had to come away.

Next year, if we get a window wide enough in the summer, I may use the Koro recycler to get some air into the root zone, loosen the fibres up again and grow a new seeded pitch from scratch.