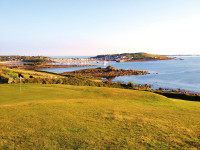 Pitchcare's attention was drawn to the Isles of Scilly Golf Club when our editor received an email about three volunteer greenkeepers who, with a collective age of 229, were keeping the course going for members and visitors.

This unusual arrangement required further investigation, so we asked the youngest of the triumvirate, Derek Metcalfe, to explain more about ... "The Scilly Season"

The Isles of Scilly nine hole links occupies the north east coastline of the island of St Mary's and was carved, largely by hand, from clifftop scrub by farmers and a golf mad Dr Thomas Brushfield, opening in 1904.

The course length is 5942 yards with a par of 73. Eighteen hole competitions mean playing the nine holes twice. The signature hole where, down the years, a number of 'aces' have been recorded, is the short 109 yard 4th which requires an iron shot into a basin from a gorse surrounded tee spectacularly poised above the cliffs.

The course, from which there are stunning views of a plethora of islands, can lean towards low scoring in benign conditions but, when the wind blows (which is often), its exposed nature makes golf a hard test. It is also forgivable to be distracted by the beautiful sea views!

The ball tends to sit up invitingly on the fairways, but holding the ball on the greens can be difficult due to their relatively small size.

When the club's one and only professional greenkeeper, Graham Mumford, was forced to retire through ill health, three members came forward to offer their services. Derek Metcalfe takes up the story.

"Not only had we no previous experience of tending fine turf, our collective age is 229! 84 year old Bill Pender is a retired quay docker, Garfield Ellis (79) used to run an inter-island pleasure boat - the Buccaneer - whilst I'm a former painter and decorator with the council, a local musician ... and 66 years old!

We were asked if we would be prepared to take on the task of looking after the course and, although we had little experience, we were given 'on the job' training by Dave Manley, now head greenkeeper at Praa Sands Golf & Country Club in Cornwall. He now visits us twice a year to advise on materials, and also provided a year long programme for me to follow for the greens. He also terra-spikes our greens and tees when he comes over, so his arrival is welcomed with open arms.

And, I have read the greenkeepers' bible, Jim Arthur's Practical Greenkeeping.

People call the course here a links, but its heathland. I once wrote to Jim Arthur when the club was building a new green to see if he could give us some advice. He replied saying he had walked over the course at some stage and described it as heathland. I bow down to the man.

Of the thirty-five acres that the course sits on, three quarters is heathland and one quarter is reclaimed fields. The soil is typical heathland and, I would assume, acidic from the types of grasses that grow and the heather that roots itself onto the fairways, which can become a bit of a problem.

When the course was first built I think they must have put lots of topsoil where they thought it would be best to create a green. I even found a piece of angle iron one day when changing a hole! Any newer greens look as though they were constructed in a similar way.

In dry periods, the greens suffer from severe compaction, so we terra-spike twice a year. There is a small bore hole that we use, but the amount of water is very limited. If I can, I try to water as many greens as possible just before it rains to get it soaked in as best I can. 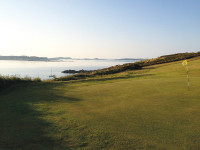 In drought years, the course has gone all brown making it almost impossible to see where the fairways end and the greens begins.

Being right on top of the island the ground acts like a sponge and becomes very wet underfoot. High winds, yes, drought, yes, but frost and snow are very rare visitors to our islands. The course can be closed due to the water, but the wind is ever present and can make for some interesting golf.

We use temporary greens for a short time when we overseed in the autumn, closing down three at a time for about five weeks to give the seed time to germinate.

Greens are cut at 6mm in the winter and 5mm in the summer using a Toro 3100 Greensmaster. We use a Wiedenmann Terra Spike for deep aeration and a sarrel roller with 50mm spikes, towed behind an old Allen National, for all other aeration. We use a pedestrian scarifier for deep scarifying when overseeding, in conjunction with the Terra Spike and the sarrel roller. For weed and pest control, we hire a contractor to spray for us. This is because we have no spray qualifications. 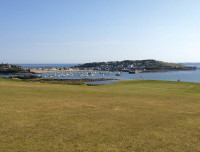 Each volunteer has his own tasks; Garfield uses the John Deere triple for mounds, surrounds and fairways. Bill uses a topper to cut the rough and I'm responsible for the greens and approaches. Then we use a set of towed gang mowers for the fairways. The "all hands to the pump" approach comes when we do the topdressing, which is also when we request for a few more helping hands from the members.

The management committee is responsible for budgets as money is very tight, so all requests go through the Chair of Greens. It's really only the price of the grass seed that fluctuates, so I have to strike a balance and choose a mix recommended by Dave Manley. Overseeding is the main area of renovations as there is a need to battle meadow grass in the greens.

People seem to have different ideas of how a tidy golf course should look. We are always battling with the weather here. In just the short time we have been into the volunteer scheme, we've had a two extreme summers - last year with torrential rain and this year with drought conditions. Even then though, the look of the course can change in the blink of an eye. Some days I can look at the course and go wow, we did that, but within minutes it can look completely different.

I give the management committee a course report every month on the work we have been able to do and what we hope to be able to do in the following month.

I will start work on preparing three temporary greens soon so all the members will be informed about our work programme for autumn. In the winter, we hope to start enlarging the ladies tees as most of them are too small. We will need a digger and driver if we proc 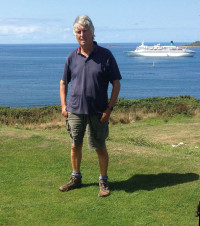 eed, but the driver will come from in-house, i.e. a member.

In my past employment, I was a health and safety rep for the union UCAAT, so I have undertaken risk assessments for all the machinery used on the course, and we do try to keep up with legislation, but I'm sure there are things we miss, as we have discovered in the past.

We do hire in a qualified spray contractor for pesticides and herbicides, who uses our spray equipment and tractor. As for 'washing down' the machinery, we use a compressed air gun! It works for us.

Garfield is our workshop technician and engineer and he takes on as many tasks as he can cope with. If we have a large breakdown, it means we may have to outsource as we have no pit in our workshop and the work can be heavy.

Most of our equipment is either second hand or demo models, and we buy from people we have a good history with; we only get one chance, as all our machinery has to be shipped to the islands. We get a lot of help from contacts in Cornwall in sourcing what we need but, at the end of the day, we just have to buy what we can afford. A lottery win would help; I could then buy all new equipment to last this club for thirty years. 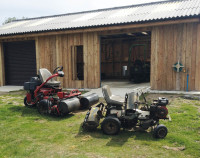 We don't appear to suffer with disease here but, as my limited knowledge comes from pictures in books and magazines, I leave all that to Dave Manley. As for pests, it's rabbits, rabbits and more rabbits. I use a mix of stale beer from the clubhouse, mixed with some water, to keep them away. This seems to be working.

I am aware of how environmentally important our site is. We have some stunning areas of heather and gorse that needs to be looked after. We are considering keeping bees to help here. Whilst we don't have an environmental policy in place, everything we do here is with the ecology in mind.

Even as a volunteer group, we do get some stupid comments, such as "I suppose you have nothing to do now the grass has stopped growing!" It's frustrating, but we are doing the very best we can on limited resources and experience.

As things stand, it looks as though the volunteer force will keep going as we would find it expensive, as a club, to employ a greenkeeper. I am learning new skills and, at my age, that can't be a bad thing, but I am sure things will have to change in the future.

The Isles of Scilly (Enesek Syllan in Cornish) form an archipelago off the southwestern tip of the Cornish peninsula.

Since 1890, the Islands have had a local authority separate from Cornwall's, but some services were combined and the islands are still part of the ceremonial county of Cornwall; the authority has otherwise had the status of a county council since the passing of the Isles of Scilly Order 1930. The council is currently known as the Council of the Isles of Scilly.

The adjective "Scillonian" is sometimes used for people or things related to the archipelago. The Duchy of Cornwall owns most of the freehold land on the islands. Tourism plays a major part in the local economy, along with farming and agriculture.

There are five inhabited islands - St Mary's (1,666 inhabitants), Tresco (180), St Martin's (142), Bryher (92) and St Agnes (73), plus numerous other small rocky islets (around 140 in total) lying 28 miles off Land's End. They are all composed of granite rock of early Permian age, an exposed part of the Cornubian batholith.

The islands' position produces a place of great contrast - the ameliorating effect of the sea, greatly influenced by the North Atlantic Current, means they rarely have frost or snow, which allows local farmers to grow flowers well ahead of those in mainland Britain, the chief product being daffodils.

Exposure to Atlantic winds also means that spectacular winter gales lash the islands from time to time. This is reflected in the landscape, most clearly seen on Tresco where the lush sub-tropical Abbey Gardens on the sheltered southern end of the island contrast with the low heather and bare rock sculpted by the wind on the exposed northern end.

As part of a 2002 marketing campaign, the plant conservation charity Plantlife chose sea thrift (Armeria maritima) as the "county flower" of the islands.