by England Rugby
in Rugby, Football, and Industry News
on 27 May 2016

0 The Secret Diary of Keith Kent 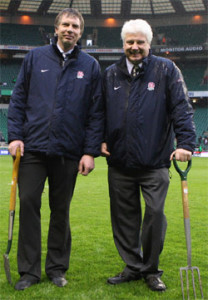 Every seed, cut and feed. It's all logged in the diary. From diseases to droughts, via pop concerts and opening ceremonies, Kent has documented it all. Meticulous in his planning, the pitch is his obsession and what a beautiful obsession it is.

It all started in 1977 when he was assistant groundsman at Leicester City. He carried it on at Manchester United and now 29 diaries and plenty of entries later he still finds himself scrawling away in an A4 notebook as he strolls up and down the hallowed turf at HQ.

"Part of the job is planning the future and it gives me a good reference point to move forward," Kent told englandrugby.com.

"The diary keeps me informed, it's nice to look back on. I just like to know when things occur because in a busy season you do things and you never remember when you do them or why you did them."

One of Kent's key entries is the weather, as he explains: "It dictates everything we do", so he'll make hourly checks of the forecast as he and his team attempt to stay one step ahead.

The challenges are different throughout the year, in winter if it's going to be frosty, undersoil heating has to go on three days in advance of any freeze. The aim, using the 19-miles worth of piping under the Twickenham pitch, is to keep the soil temperature at six degrees Celsius. Not confusing the grass in those conditions is a constant battle.

"You have to think as the plant would think so that I don't baffle it. If we have a prolonged spell of frost, and in my experience at Old Trafford the soil holds the heat in, you can get it to 10 Celsius which is far too warm, so you turn it off and let the pitch cool down because the plant does not know what is happening," said Kent.

"It's got white hair because it has frost on it and its feet are sweating so it wants a drink of water but I can't put the water on because I'd freeze it. You have to think as the plant would think so that I don't baffle it."

The weather in summer is less challenging, as Kent reveals: "The groundsman loves this time of year."

The Twickenham pitch will be cut twice a day in both directions, minimum eight times a week as the length of the grass is reduced to 25mm - on average it's between 27mm to 40mm throughout the season.

After 50 games of Sevens rugby the weekend before, Kent and his team have their work cut out to get the pitch ready for the weekend's action which sees the Aviva Premiership final on Saturday as well as four games on Sunday including England versus Wales.

For the original article, visit www.englandrugby.com.