16 The secret of a success

In the heart of the Danish countryside, surrounded by 72 hectares of test fields, the main research and development site of DLF Trifolium resides. The history of this company goes back over 125 years ago to 1872 when it was established as a seed grower and producer. Nowadays the DLF group is a co-operative, owned by around 5400 individual seed growers. 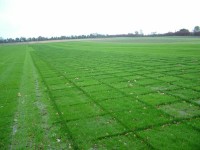 Greenkeepers and Groundsmen whio visited BTME 2007 had an opportunity to win a trip to Denmark in 2007. The competition, run in conjunction with Pitchcare, was open to all visitors coming on to the DLF Trifolium/Johnsons Sport & Amenity stand. Now there are just a few days left to enter the competition.

Two successful entrants will win the opportunity of an 'all costs paid for' trip to the largest breeding facilities in the world at DLF Trifolium A/S, Head Office and breeding station. This is where new varieties are being developed for changes in climatic conditions, future restrictions on inputs and demanding playing circumstances. Other places of interest included on the trip will be a premier football stadium and a leading golf club.

There are some excellent runners up prizes as well so to enter the competition simply answer the following five questions .

3) How many tons of seed are sold each year from DLF's Inkberrow HQ?