0 The secrets of the £1m pitch revealed at Pitch Focus 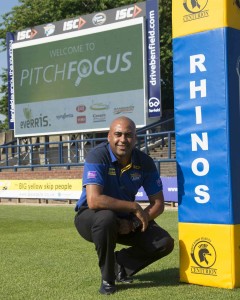 Leeds Rhinos and Leeds Carnegie Head Groundsman, Jason Booth, revealed his secrets of the Headingley Stadiums' highly successful £1m pitch rebuild to around 100 leading groundsmen from football, rugby, schools and local authorities, at the inaugural Pitch Focus event organised by Everris at the ground in July.

Although the pitch reconstruction project was eight years in the planning to put all the pieces in place, Jason reported that really came to fruition in the frenetic three months from starting the rebuild in October 2012, to having a firm and fast pitch ready for play for a prestige Leeds Rhinos Boxing Day match.

"Having the right partners and the close working practice of all involved has been crucial to the fast turnaround, and the subsequent management that ensured the surface quickly established and was sufficiently strong to withstand the rigours of the rugby league season," he said.

However, Jason acknowledged that the agreement to play Leeds Carnegie rugby union at an alternative ground for the season had also been an important factor.

Jason, accompanied on the microphone by the club's pitch consultant, Tim Colclough of TGMS Ltd Sports Surface Consultants, reeled off a list of staggering statistics when it came to the logistics of the rebuild, including the vast earthworks to excavate and move out, and then 4000 tonnes of new material brought-in to construct the new base to a standard they could be confident would be stable and support the healthy natural turf growth.

Then there was 26 miles of electric cabling for undersoil heating, pipework for a comprehensive new irrigation system and the access ways to move lighting rigs on and off the pitch.

One of the important learns from the process, he reported, was the appointment of their own independent construction surveyor to oversee the work and constantly review the project's progress.

Introducing techniques more commonly employed in the industrial construction industry, Jason believed they now have a pitch base that will perform for many years with an on-going annual renovation process.

Pitch Focus delegates also had the opportunity to discuss the Leeds' experience with companies leading the project, as well as some of the latest innovations and developments in sports turf management and maintenance, including:

Everris - Using the latest in fertilizer research and technology to support the successful reconstruction and reinstatement of the Headingley pitch, along with ongoing monitoring to better tailor nutrition and input advice to the specific requirements. Furthermore, demonstrating how new fertilizer technologies and best practice can help drive improvements in turf quality.

Ransomes Jacobsen - Turf health and playability on sports pitches could be enhanced by new rolling technology developed for golf courses, but with great potential to manage sports turf more effectively, according to trials by Alan Ferguson at the FA's St Georges Park. Alternating mowing and rolling may significantly increase sward quality, with no adverse effect on playability.

Lely-Toro - Investment in a state-of-the-art Toro Lynx system has put the pitch management team in ultimate control of its irrigation. The computer-based software is coupled to wireless soil sensors beneath the surface, enabling effective planning and real-time adjustments to benefit turf health, playing surface conditions and to dovetail with other turf management regimes.

Premier Pitches/Campey Turf Care - Systems for optimum firm, fast playability that suited the Leeds Rhinos' rugby game best, they opted for a Fibresand reinforced upper rootzone, which was installed by Premier Pitches Ltd, and then installed custom-grown Fibreturf because of the time of year.

Summer renovations will be undertaken using a Koro Field Top Maker from Campey Turf Care Systems to get the pitch back in play just four weeks after seeding.

Commenting on the success of Pitch Focus, Richard Walton, Everris Business Manager for the UK & Ireland, said: "Teaming up with other companies involved in the new pitch at Leeds Headingley to share our experiences was a great opportunity to impart knowledge and insight, with a focus on specific research, techniques and products.

The feedback we received from those attending was extremely positive, and it is a format that we would be keen to progress in the future to further inspire and inform the industry."

Lee Metcalfe, Head Groundsman at Manchester City Football Club's training ground said that the format of the event was ideal: "What a fantastic way to learn, being out on the pitch with your industry peers!

If you come away from an event like this with just one piece of information that will help you improve your surfaces, it's a worthwhile use of your time."

Headingley Stadium Commercial Manager, Rob Oates, added: "The pitch is the foundation for everything commercial that goes on at the Club. Success on the pitch is integral to success off it, so it is essential we give the players the surface on which they can perform."

"We have invested £1m on the pitch so far, but we recognise that there is more to do to keep it in the best possible condition. We were pleased to host Pitch Focus as an acknowledgement to all the businesses that have contributed to the success of the project, and to its ongoing future performance at the highest level."