0 The Short Cut - Machinery and Overseeding

In previous articles in this series, Greg Evans explained his reasons for aggressively mowing greens to a height of just 2mm. In his initial article, he covered the cultural side, summer aeration, frequent and heavy sand dressings and aggressive verti-cutting. His next article discussed water and fertility; the plant's energy sources, with emphasis on healthy but lean growth.

In this, his final article in the 'The Short Cut' series, Greg explores two further elements critical to successful greenkeeping; machinery and overseeding 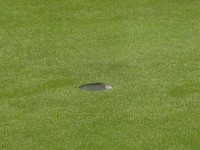 Some greenkeepers still assume that pedestrian mowers are required to safely cut greens down to a height of 2mm or less. Serious debate continues in the greenkeeping profession about the differences in fineness of cut between pedestrian and ride-on mowers. Many traditionalists are convinced that a pedestrian mower delivers a better quality of cut than the ride-on mower. But now, mower manufacturers claim that there is no difference in the result achievable between the two. I agree. My greens are cut with a triple ride-on machine.

At Northwick Park, where I was previously Course Manager, a pedestrian mower, with a floating-head, was used on the Creeping Bent, US specification greens all year round. In the summer months, we hand mowed at 2mm without encountering any problems, such as scalping. Now, five years later, at Ealing Golf Course on old push up greens, we use a ride-on greens mower, cut at 2mm and again do not suffer any problems.

A pedestrian mower may be more aesthetically pleasing but, in my experience, a good ride-on mower can now deliver a better quality of cut than the hand mower. The other benefit is that the job gets done faster, allowing for better use of your staff resources.

There have been substantial technological advances to greenkeeping equipment during the past twenty years. These improvements to machinery help greenkeepers achieve better quality greens than previously possible. Just compare some of the television clips of courses in the 1960s with modern greens.
Tools such as the accu-gauge now allow greenkeepers to set the height of cut to within a fraction of a millimetre. Contrast this with the time that coins were used to set the roller to bottom blade height. 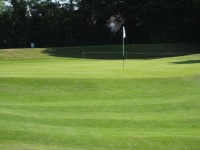 Machines have also become more agile. I have an eighteen year old Toro 3000D. The difference between using the Toro and the John Deere 2500 is amazing. The John Deere will allow you to do a 360 degree turn on a green without leaving marks. Tight turns were just not possible with the Toro, and greens were often damaged, especially the perimeter cut. Technological advances such as these have made it possible to maintain the lower heights which I advocate with much less stress on the grass.

Groomers on machines are very popular and all the major manufacturers now recommend them. However, grooming must never replace the need to verti-cut. As I mentioned in the Feb/Mar edition of Pitchcare, verti-cutting is crucial in achieving an upright grass plant. It allows the greenkeeper to better integrate sand and fertiliser dressings into the turf canopy. Verti-cutting has the added benefit of controlling the top surface thatch build up. It is a crucial operation in helping to reduce the 'snakey' ball roll that golfers encounter, especially on Poa Annua dominated swards.

Personally, I never use groomers, and none of my cutting units have them installed. To have them installed means finding room for them on the unit. This is done by increasing the space between the cylinder and front roller. However, when these modifications are made, the cutting unit will lose some of its contour following capabilities of the machine, increasing the potential risk of scalping.

By adding a groomer to the unit, additional weight is added. For a typical unit, it will add several kilos. This additional weight naturally puts extra pressure on the surface and, again, increases the risk of scalping. However, the main reason I avoid groomers is the extra stress that they put on the outside line or perimeter cut. If the operator could click them in and out with the flick of a switch, it wouldn't be so bad but, as this feature is not available, the operator is forced to groom the outside line with every cut, whether wanted or not. This puts an enormous amount of stress on the outside line. 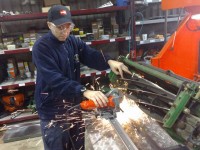 Grinding mower units frequently is essential, whatever height you cut your greens at. The lower the cut, the more critical it is to have sharp blades. There's nothing worse than going onto a green and seeing those white leaf tips that have been cut with a dull blade. Dull blades bruise the leaf, leaving them vulnerable to parasitic attack. I always grind my units 'little and often' to keep them sharp. Readily available grinders are a must in the maintaince facility for any golf course.

Overseeding has become more and more fashionable in the last few years. Cultivars bred today have greater shoot density under close mowing and are more disease tolerant than cultivars of the past. However, seed is a lot more expensive than it used to be and careful thought is required on the timing of overseeding to maximise the chances of success. You need to consider the type of surface you want to produce but, more importantly, you need to do your homework and pick the cultivar that is best suited to your own course. Don't necessarily accept the sales representatives advice as gospel, do your own research.

Overseeding regularly with the right cultivars will give you a greater sward density. It will also help your grass species composition. I usually overseed three times a year, in the spring, summer and autumn, at low rates, around 3g/m2. Again, I advocate the 'little and often' approach. I also only use Bent grass. At Ealing, we use Colonial Bent for budgetary reasons. However, if I had unlimited funds I would definitely be overseeding with the latest Creeping Bent cultivars.

I believe Creeping Bent to be the best greens grass on the market. The surfaces it produces are second to none. Also, golfers love this grass, as it maintains very high shoot density under very close mowing. When I am responsible for the construction of a new green, Creeping Bent is now my preferred choice of seed.

Whilst considering overseeding, I would like to comment on Fescue and openly share my views of it as a greens grass. Fescue is a fantastic turf grass.
It has low fertility requirements and needs less maintenance than the other grasses. However, it is not a good putting green grass, especially on parkland courses and soils. It is very temperamental and I have seen too many greenkeepers chase the fescue dream unsuccessfully. It is also prone to attack from diseases such as Dollar spot and Red-thread. 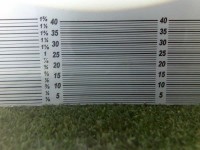 More importantly, serious golfers are not impressed with its ball roll capabilities. Because it is so wiry, it can leave a very sparse surface. These thin spots often fill with Poa Annua seed heads. Fescue greens are normally cut at a height of around 5mm, so you end up with two different grasses growing at two different heights. The surfaces produced are usually slow and bumpy. I regard Fescue as a great tee and fairway grass, but not one for greens, I'm afraid.

Over these three article series, I have elaborated upon several of the most important variables that allow greenkeepers to achieve and maintain a sustainable 2mm height of cut. Over recent years, techniques have changed, technologies have improved and our end-users, the golfers, have become more demanding. Naturally, over the years my own views on maintaining greens have evolved as well. My confidence has also grown and I want to encourage fellow greenkeepers not already trying the "short cut" to give it a try. I know from experience that it is possible to cut greens to a 2mm height, and maintain sustainability year round, and at reasonable cost. I conclude with the following observations: 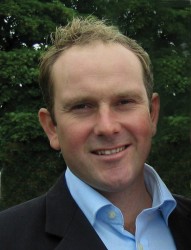 1. Golfers love greens cut short. At Ealing, the Club is seeing the membership numbers increase and golf society bookings are up on last year by 26%. Although this is not solely down to the speed of the greens, it is undoubtedly an important part.

2. Colonial bent can and will germinate while the surrounding grass is being cut at 2mm. It will continue to establish and grow whilst being cut at this height. I am noticing large pockets colonising sections of my greens.

3. Cutting at 2mm will not mean certain death for the grass. Quite the opposite. The greens are getting finer, denser and disease is decreasing. Also, the playing surfaces have become playable to a very good standard all year round.

4. Poa Annua can become your friend and not your foe. I have completely changed my view on it since my college days. Research bodies, agronomists and unions all push the negative side of Poa. I find that, correctly maintained Poa can produce the most fantastic surfaces in winter as well as summer. It becomes relatively disease resistant and roots will not be shallow if they are given the chance to descend. In my view, we as greenkeepers need to manage Poa better and stop trying to get rid of it just for good public relations.

About the author: Greg Evans leads the consultancy, Complete Golf Solutions, which provides practical advice and assistance to organisations and individuals in the golfing industry. He can be contacted on 07951 157 208 or by email at gregevans1973@hotmail.com