We hate to remind you that winter is just around the corner and, with that, comes a threat to thousands of games and events that are scheduled to take place across Britain's pitches if the frost is severe or adequate plans have not been made.

There can be a huge financial loss caused by cancelling events. In our experience, no venue owner likes the word 'refunds' or 'rescheduled'. Even if you placate your ticket holders, sponsors, series organisers etc., consider the long-term damage to your brand values. People invest a level of trust in top brands - for example, they expect Manchester United or Chelsea to win most of the time, or an M&S jumper to be of good quality.

In the same way, they expect that a ground of a certain capacity, appearance or, indeed, admission cost, to put on a professional 'show' and make efforts to combat the weather. In our experience, it is this potential loss of gate receipts that is driving people to using frost covers, rather than the FA's new regulations for the 2010-11 season, which demand that each club must have adequate frost protection in place.

An FA fine for a breach of these new regulations would only compound the misery of losing out on potential gate receipts.

Sometimes, a match or race meeting will be cancelled. It's true that, below minus 8 degrees Celsius, there is little you can do to protect the grass and ground from frost. Add wind chill factors, and even a bright, clear January day and the venue becomes a hazard for professional sports people, or millions of pounds worth of horses, through a risk of serious injury whilst competing on an arctic surface. 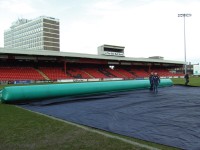 s always going to be a group decision - event directors, groundsmen, your venue weather forecasters, team managers all have a say. The question usually comes down to asking if it is worth putting the covers down if we know it will be, say, minus 11 degrees, with the wind chill factor? Sometimes, you are perhaps only putting the covers down so that both public and media can see something is being done. But, there is a very definite business value in making that effort sometimes - goodwill goes a long way.

For temperatures down to minus 4 degrees - typical for a British winter - there's no real debate. You can do something, and most frosty mornings can be dealt with by utilising a range of covers, which can cost as little as £6,000 for a standard football pitch sized cover. A solution that is certainly worth considering as a protection for players, the pitch and, most importantly, your profits.

If you are located in the balmy south of England, or at a coastal venue, you might think it's cheaper to rent a cover occasionally. This service is certainly on offer, but it's subject to availability, strictly first come, first served.

Okay, so you need a cover - which one is best?

There are four main types to consider:

General Agricultural Fleece: This is your basic cover. Maybe okay for one or two deployments but, equally, it could be useless after just one. On the upside, this is a very lightweight and cheap option, and ticks the 'we have to be seen to be doing something' box. On the downside, this cover can stick to the grass and even rip it out when removed - your club management won't thank you for that!

Geotextile Woven Cover: This is a much heavier, more durable product, weighing at least 130gsm, compared to just 17gsm for a General Agricultural Fleece. The pros are that it offers protection from cold weather down to minus 4 Celsius, has good durability and is easy to use too. On the negatives, the Geotextile cover can feel heavy and difficult to manoeuvre when laden with a hard frost.

Polypropylene Type: Again, this is a substantial cover that offers good protection, weighing in at 130gsm or more. It's also porous, so air and light gets through, which allows some germination, and is also a little lighter to remove after a hard frost than the Geotextile. With its touch of the Titchmarsh green fingers and better care for the grass, there's not really any downside with these covers, as they last well too.

Inflatable Covers: The other alternative is a set of inflatable frost covers. Obviously you would need to sink temporary ground anchors to secure them, and you have to link the sections together, all of which takes a little time. This dome-cover will shrug off rain and sleet, plus create a useful air gap between the grass surface and the cover - another great buffer when fighting a higher degree of frost. This application takes slightly longer to deploy, but the results will be worthwhile.

In general, PVC or non-porous covers will stick to, and could damage grass fairly quickly so, if you plan on leaving covers in place for several days, a polypropylene material is the best - it's like Gore-Tex for grass, it's breathable, so it keeps the blades alive and kicking.

Thinking Outside the Penalty Box

There are a couple of alternatives worth mentioning:

The Geo Fleece, which is a thick cover that comes in 4.5 metre widths and 50 metre lengths. You get better protection, but the cover does weigh a fair bit with frost and snow on top. These covers have been proven at Carlisle FC's ground, offering frost protection at up to minus 8 degrees Celsius. A Geo Fleece cover is also great for the shaded and well used areas of a football pitch, it just has that bit of extra thickness.

Coping With The Unpredictable Weather 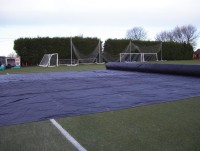 ody in Britain would say our climate is predictable, regardless of the seasons. Frost, snow, hail, we've all seen it from October to May, plus your stadium may well have its own 'micro-climate.' So, here's my top tips for coping with typical wintry weather conditions:

Snow is a tough one. If it's a heavy fall, the covers are on, and you don't have a game scheduled that day, then it's got to be the groundstaffs' call. Much depends on the condition of the ground beneath the cover. If it's hard-packed earth you might want to remove the snow. But, equally, if it is softer soil there is a possibility of grass damage when removing the snow, and so you may want to leave it to thaw for slightly longer.

The other thing worth thinking about with heavy snow is that a substantial, heavyweight cover will allow you to use a tractor to skim the snow off. A lightweight cover doesn't give you that option. Before removing the snow, use your most up-to-date weather forecast - and we would suggest using a professional pay-as-you-go service, rather than the standard Met Office forecasts. Snow is a great blanket against frost damage, of course, so you might be best to simply leave well alone.

Caught short on a frosty night?

We know the feeling. If frost strikes, and the covers are off, there's no point in deploying anything on frost-coated earth. It will simply seal in the icy conditions.

But, let's assume you have the covers in place and there's a match on the next day. Ideally, you want the fro 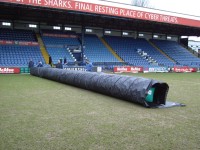 st to melt through, as the covers heavier when removing them with the frost on. One other typical feature, which can happen inside a modern stadium, is that a portion of the ground will stay frosty, as it doesn't get direct sunlight on a winter's morning. The goalmouth and centre circle areas of a typical football pitch can also turn into tundra quite easily, as the grass covering isn't as good there, due to the concentration of play in these areas.

Double or triple-skin sections are available for centre circles and penalty boxes. It doesn't mean these areas will withstand double the minus 4 degrees that a typical cover can handle, but it does mean a layer of extra protection, and we've seen good results at racecourses and football grounds. These principles can naturally be applied to certain corners of grounds or sheltered areas of racecourses. You can also use the heavy duty Geo Fleece blanket that is currently on the market.

One final tip; some companies may guarantee frost cover protection to a specific temperature point. In theory, this may be true but, in reality, once you add on the wind chill factor, an air temperature of say minus 5-6 Celsius could well be in the region of minus 10-11, depending on the local conditions. 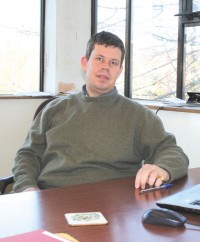 The bottom line is that "you" know your ground better than anyone; the more exposed areas that often catch the wind, the heavily used sections where grass takes a hammering, or little dips where water gathers more. In the end, it will be your planning and forethought, plus good quality covers, that keep the worst of the weather damage at bay.

People often ask us about the level of labour needed to deploy and remove the heavier covers, time involved or even best techniques.

The simplest answer is to use a roller system. With such systems, two or three people can safely cover a football pitch in an hour. If you have the labour, then an inflatable section system also works well.

I would also suggest that, when you purchase rollers, you do not buy ones that are made from thin material - these tubes will damage quickly and there is nothing worse than having a tube that cannot inflate with a 1500sqm cover on top of it!

As with any purchase, we would also suggest you look at the after-sales support and ask yourself whether your supplier offers advice or product support if you're having cover problems and the weather is changing rapidly?

e long run it does make a difference that an established, specialist supplier is just a phone call away. Time really can mean big money in those circumstances.

Some venues have underground heating, which is obviously a great benefit, but even that cannot combat extreme cold spells. Also, you may want to consider the environmental impact of letting that expensive heat dissipate into the air. If you only want the covers on for short periods, or when the weather is particularly bad, then a close weave type of cover is best, as this keeps the heat in nicely - but remember not to leave it on too long as it could damage the grass.

Your pitch is like a film set or theatre stage, it's where the drama unfolds and history is made. But, for the set to look its best and be ready for the show, it needs plenty of TLC, protection and planning as well as a keen weather eye to keep it in great shape for the next match.