Four articles highlighting some of the success stories gained from using machinery from the SISIS range of products. For more information and details on purchasing SISIS equipment, ring Dave or John on +44 (0) 1902 824392.

NOT A SPORT FOR THE FAINT HEARTED!

Lochcarron Camanachd have been promoted to the Premier League and it's all down to their recent purchase of a SISIS Multislit!

Well that's a gross exaggeration, but President of the Lochcarron Shinty Club, George Hendry, says that they are very pleased with its performance. The club has 2 senior and 3 youth teams and the 1.3 hectare pitch is therefore in heavy use throughout the week. Given the high rainfall on the N.W coast of Scotland, good drainage is vital and the deep slitting action of the Multislit has been a valuable aid to keeping the playing surface firm and dry.

2002 has been an exceptional year for Lochcarron. As well as promotion to the Premier League, they won the Balliemore Cup and were awarded the "Marine Harvest Club of the Year". Full Centre Kenny Ross was voted North Player of the year for the second season in succession and went on to win the Ross and Cromarty Sports Council "Sports Personality of the Year".

Lochcarron Camanachd (that's Gaelic for Shinty), founded in 1883, is one of the oldest Shinty clubs in the Highlands and is the sporting and cultural focal point for a community of 800. Most of the players are drawn from the traditional occupations of the Highlands such as fishing, stalking, shepherding, crofting and forestry. The club also has an active youth development policy with weekly coaching sessions from the age of eight.

Shinty is an ancient and unique stick sport entailing traditions of skill, courage and stamina dating back over countless generations to the earliest roots of the Celtic race. Unique to Scotland, it is one of the world's oldest games, dating back at least 2000 years. Similar to lacrosse and hurling it is a fast and skilful game and very exciting to watch. The caman (stick) was originally made from ash or hickory cut from a tree with a natural curve, but nowadays strips of wood are glued together. It has two sloped sides so that the ball can be hit with either side. The caman can be swung above the head and the ball can be stopped with the feet. The ball is small and hard, and covered in leather.

Testing physical fitness and endurance to the limit, Shinty is not a sport for the faint hearted!

BRAVE NEW ERA AT THE ADDINGTON

In the past, all maintenance on the greens was carried out using pedestrian machinery and was predominantly mowing with just occasional light scarifying and spiking.

The recent frequent rainfall highlighted a severe thatch problem on the greens, but due to an exceptionally busy golfing year, it was not often possible to put the greens out of play for treatment. In consultation with the club's agronomist, it was decided to try deep de-thatching/linear aeration, and demonstrations were arranged.

For Head Green keeper John Hunniset (pictured above) speed of operation and clean-up were critical and the ROTORAKE 600 demonstrated these features dramatically. The club placed an order.

In mid-April John set to work with a major competition scheduled for Bank Holiday. In just three days he was able to scarify 20 greens, to a depth of 25mm at 6mm spacing, including collection. John describes the amount of thatch removed (not soil or dressing) as "incredible". Recovery of the putting surface took no more than one day. In fact the staff were con-gratulated on the performance of the greens following that weekend's competition.

John has now instigated a programme of linear aeration with the RR/600 on a regular six-week basis throughout the Summer, with micro-tining in-between. His other recent acquisition of an irrigation system has also given him extra control.

The Addington is emerging from a very distinguished past into a brave new era, using the best modern machinery and techniques - with the SISIS ROTORAKE 600 helping them to achieve their aims. 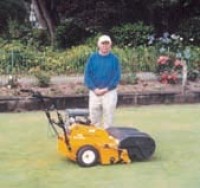 Mr. Seymour, a retired Groundsman, discussed the slow pace of the greens with Bill Ryan the Greens Committee Chairman and told him the most beneficial thing the club could do was to obtain a SISIS Auto-Rotorake. He later sent Mr. Ryan a SISIS brochure and the San Francisco club was also contacted by SISIS Inc., the SISIS subsidiary company based in the USA.

The San Francisco Lawn Bowling Club then embarked on a fund raising program to purchase the Auto-Rotorake and in early 2002 the machine arrived. It is a sturdy, well built machine and Greens keeper Dennis Wade likes the way it handles and the ease of changing the various reels. The club says they have had excellent service from SISIS and look forward to many years' use from their new de-thatcher.

The San Francisco Lawn Bowling Club is located in Golden Gate Park. It is the oldest Municipal lawn bowling club in the USA. It has three greens, the first was built in 1901, the second in 1912 and the third in the mid-twenties. The original club was called The St.Andrews Bowls Club and the 1912 green was built for the Golden Gate Women's Bowls Club. The two clubs later merged.

The greens are maintained by the City & County of San Francisco Recreation Dept. On September 30th 2001 the club celebrated its centennial with about 200 people in attendance and all three greens were full for a wonderful day of bowling and festivities.

To combat the problems, Andy purchased a SISIS ROTORAKE 600 in November 2001, a little late to start Autumn renovation, but nonetheless necessary. All the fine turf was scarified to a depth of just 15mm to ensure a good recovery. When the bowling season commenced, there was an immediate response from the bowlers who said that the green had never played better.

The cricket squares however were more of a problem. Renovation was late and Andy had had to be wary not to remove too much thatch and the surface was therefore "dead" at the start of the season. However an aggressive programme of in-season treatment on previously played wickets has been undertaken with the hope that the surface will recover to the benefit of the players' performance. Watch this space for progress reports!

With a wide diversity of fine turf surfaces, Andy found the collection facility of the ROTORAKE 600 particularly attractive. To attempt a clean-up of debris, having worked at the depth he required for consistent thatch removal, would have been impracticable without a box.

Another important feature was that the drive wheels are within the width of cut so that previously removed material is not smeared, should the conditions be wet. Andy also found that he could work close to the edge of the bowling green without the wheels running off.

Originally British Airways staff had the exclusive use of their club, but recently it has been possible for other local clubs to use the magnificent facilities on an occasional basis, allowing the club to be more self sufficient. They do not restrict themselves to ball games - you will find all sorts of other activities going on at the Concorde Club, such as angling, classic cars and line dancing.

This year, for the first time, the sports ground has been used by the national teams of Scotland, Ireland, Canada, Fiji, Australia and Russia as their training base for the World 7-a-side Rugby tournament at nearby Twickenham, with very favourable comments. Larger SISIS machinery including Fibagroom, Variseeder, Quadraplay and Twinplay are used to maintain the outfield turf areas.

Is this the largest sports club in the UK, with a membership of 30,000?