by Lucy Nicholls
in Synthetics, Schools & Colleges, Football, and Machinery & Mechanics
on 28 Jul 2020

Synthetic sports surfaces require a good maintenance programme in place from the very beginning. Failure to maintain the surface could lead to issues such as compaction, loss of porosity, inconsistent playing characteristics, damaged fibres and contamination of the infill. 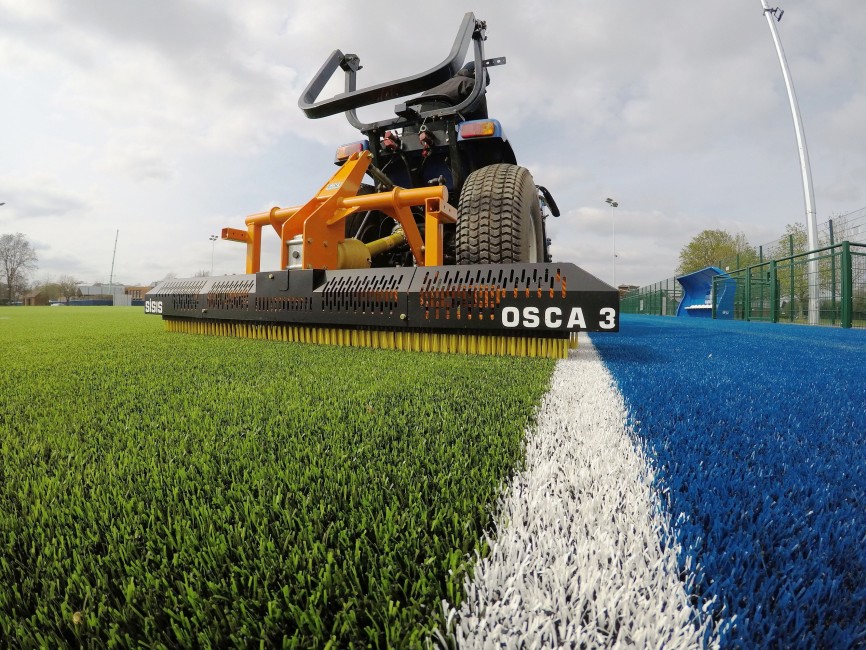 One machine that is being used by many groundstaff is the SISIS Osca tractor mounted powered oscillating brush, which is ideally suited to either a sand or rubber crumb surface.

A pair of oscillating brushes allows periodic aggressive brushing to be undertaken to agitate the upper infill level helping reduce compaction, encourage the fibres to stand upright and reduce the risk of contamination and surface water.

It can also be used for regular light brushing, helping to stand the fibres up, move the infill around, creating a level surface and minimise the threat of moss and algae.

It uses fewer passes than a conventional drag brush, and has the option of adding a further 1.8m wide brush to the system which helps to enhance the final finish.

Once Warwick School had decided to invest in a new synthetic pitch, Grounds Manager Duncan Toon felt that the SISIS Osca was the only machine that could maintain the new surface effectively and truly justify the major investment decision:

"With the investment which has been made into the synthetic surface, I felt that we needed to have the best equipment to maintain it, and for me, the Osca was essential."

"It is clear to see that the decompaction this machine achieves is simply on a different level. Since we have been using it the pitch has significantly improved."

Another user full of praise is Andy Jackson, grounds manager at Stoke City FC, who has reported 'phenomenal' results since incorporating the SISIS Osca into his synthetic surface maintenance programme.

"Getting the right equipment for all the different textured pitches we have here is big task, and it's key to how we go about our business," says Andy.

"I wanted a machine that was going to be effective and quick but to get a machine to do those two things I felt would be a hard task."

"The oscillating brushes are the best feature because they get rid of any compaction problems and provide a fantastic finish. Players at all levels, from seven year olds up to the first team, play on these pitches, so for me it is just important to have the synthetic surfaces as well presented as the natural pitches."

"The results have been phenomenal and personally I think the Osca ticks all the boxes in getting synthetic turf to a level where it needs to be."