by Louise Prettyman
in Machinery & Mechanics
on 06 Apr 2016

Stadium owners worldwide are recognising the financial rewards and brand value that can be gained by being environmentally friendly. That includes the eco options available when it comes to mowers. 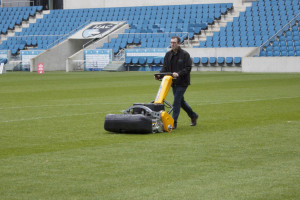 To cater for the needs of Groundsmen, Advanced Turf Technology (ATT) have developed 30" and 34" versions of its popular INFiNiSystem™; a 'true hybrid' that can be driven either 'hybrid electric' via an engine generator configuration, or fully electric via dual DCLA batteries, or one single LiPo battery.

A recent study at a football club that uses a petrol mower found that fuel costs per mow were £3.52. Based on 10 cuts per week, for 49 weeks of the year, the total fuel expenditure worked out at £1,724.80 per mower. Mow the same pitch with the all-electric ATT INFiNiSystem™ instead and the club could save a staggering £1,592.50 a year per mower. In simple terms, you can mow a full size football pitch for less than 50p!

When comparing the running costs of petrol driven versus electric one should also take into account the cost of collecting and storing the fuel. Petrol, considered a 'dangerous substance' by the Health and Safety Executive, is covered by legislation when it comes to storage because of the potential risk of explosion and serious fire. The Petroleum (Consolidation) Regulations of 2014 calls for a license to store petrol in certain circumstances, and in itself could involve time and resources to ensure compliance.

Not only is there the cost saving element, the INFiNiSystem™ also operates with a significantly reduced carbon footprint compared to that of a petrol mower. CO2 emissions based on the fuel usage discussed above is 2.4kg per litre of petrol - and the number of trees required to offset the monthly usage would be 1.437, or 17.25 annually.

Two regulations within the Health and Safety at Work Act 1974 are of critical importance to groundsmen and employers when it comes to mowing - 'Hand­arm vibration' and 'Noise at Work'. Both conditions are more relevant to engine driven machines as opposed to electric ones.

Hand-­arm vibration (HAV's) is a condition affecting the joints, muscular system and nerves, most commonly in the hands and wrists, caused by over exposure to equipment that vibrates. The level of risk depends on the magnitude of the vibration and how long an individual is exposed to it. Measured by the acceleration level in m/s2, the HSE sets an Exposure Action Value (EAV) of 2.5m/s2 and an Exposure Limit Value (ELV) of 5m/s2, both over an 8 hour period in a single day. Likewise, the Control of Noise at Work Regulations 2005 has action levels and limit values that require adherence with; the exposure limit values are a daily or weekly exposure of 87dB and a peak sound pressure of 137dB.

Many organisations therefore have been tasked to find equipment that transmits less vibration and noise but at the same time still performs the job effectively and efficiently. This market demand was the impetus behind the redesign of the INFiNiSystem™ into a dual power source machine. Operating the machine with the battery set-up reduces vibration to 0.85m/s2 and enables the operator to carry out functions at 77.5dBA, reducing noise for themselves and the general public. It is these attributes that has seen the ATT INFiNiSystem™ being awarded Quiet Mark status.