Following my article in September regarding the Sportcity Arena which we have taken on as a reserve team venue, it was hoped that drastic works were to be carried out to rectify what was clearly a very poor pitch. In total we have played 8 games there up until last night and every game has had a doubt cast over it due to the fact that the drainage capabilities are about as good as a concrete floor.

After meetings that have led to more meetings, the owners of the stadium, the local council commissioned PSD to do an independent detailed survey of the pitch to give everyone a starting point on where to go from here. Though we haven't seen the report yet, it was evident during their visit that the soil was a lot more 'heavy' at the south end than anywhere else. A more shocking find was that following the replacement of the main drain some 6 weeks ago, a routine dig of selected areas shown that one of the lateral drainpipes actually fell below the main drain-it seems a new method of pitch drainage called 'gravity fed' is now in use! 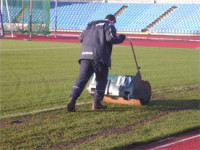 When we multicore, a tidal wave of water comes up out of the surface very quickly, even in the driest areas…. 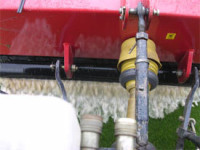 One thing we can take comfort in is the following:

The Club didn't pay for this pitch

Our own contractors, Mallinsons, were not involved in it either.

Had this been the case, then we would be a lot more worried than we are at the moment. Interestingly, as the pitch worsens next door, Mallinsons can take great pride in winning an award at the annual BALI awards last month for the construction of the City of Manchester Stadium pitch-something which the Arena pitch would never win in a million years.

The most frustrating thing, drainage aside, is that the pitch itself plays really well, with no more than around ten divots having come out all season-amazing considering how wet it always is, as you would think that it was very shallow rooted. The only marks after a game are heel marks where the players have sunk in, and these are easily rolled out following the game as the pitch is so soft. 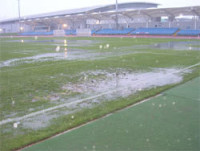 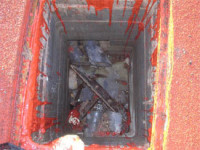 What confuses me slightly is that on the main contractors website, they describe the pitch in their news section as 'a sophisticated £160,000 design also used as MCFC's training ground'. Sophisticated? NO, Training ground? NO. If the small details can't be put right, what chance did the pitch ever have of being right?

Only this morning we tried to solid tine the pitch to a depth of just 95mm with brand new 9mm tines-the result as you can see in the picture is that just 3 runs were done, and out of 24 tines, 18 were bent either slightly or severely-one so bad it was ploughing a trench as it was going in the ground. 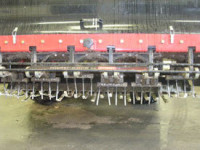