Only weeks remain before the turf management show of the year - and BTME 2016 is set to be one of the biggest yet with five Halls of exhibitors, a bumper education programme and one of the industry's major conferences joining the party! 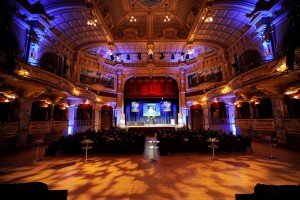 BTME 2016 is the first for several years to feature five Halls at the Harrogate International Centre with Hall Q joining the usual A, B, C and M. Over one hundred exhibitors - from the industry's biggest worldwide names to brand new companies - will be putting on the most diverse show in the industry featuring everything from fungicides to turf apps for smartphones.

Jill Rodham, BIGGA's Business Development Manager, said: "BTME 2016 is the only place in the turf management industry where thousands of delegates from all corners of the sportsturf management sector come together with hundreds of exhibitors.

"There will be five Halls showcasing all manner of new products, innovations and more and we're very confident it will be a hugely successful show with plenty of business done during the week."

The thriving Continue to Learn programme again gets the show of the year underway. There will be in excess of 240 hours of education available to visitors, over 40 hours of which are free of charge to attend. Encompassing events for Course Managers, Deputies, First Assistants and Greenkeepers; Golf Club Managers; Directors of Golf; Groundsmen; Journalists and PR representatives, there is an education opportunity for everyone working within the sports turf industry.

Headline speakers include Elizabeth Guertal, Turfgrass Professor at Auburn University in the United States, who will be appearing at the Turf Managers Conference, held for the first time in the Harrogate's historic Royal Hall on Monday 18 January. The subjects covered are too numerous to list in full but include golf mechanics, mathematics, photography, team appraisals and soil analysis! Head to www.btme.org.uk/education for the full programme.

Sami Strutt, BIGGA's Head of Member Development, said: "This year we are again aiming to put on first-class education for over 3,000 delegates at the Continue to Learn programme. Early figures show we are more than 50% up on bookings from this time last year, so I urge you to book a place on our seminars, workshops, sessions and conferences now to avoid disappointment!"

Before that event, Tuesday 19 January features the inaugural Groundsman Conference, hosted in association with the IOG, which will include educational sessions on cricket, rugby and a debate on natural versus synthetic turf.

BIGGA CEO Jim Croxton said: "The excitement is now palpable as BTME 2016 approaches, and the continued evolution of the show is evident as we prepare to welcome not only thousands of delegates and exhibitors but also GolfBIC for the first time.

"We're confident this will attract even more of the key figures and decision makers from golf clubs. I'm looking forward to sharing the HIC with GolfBIC delegates and presenters and I know all of our exhibitors will be very keen to talk business with them too. The stage really is set for a memorable week at our flagship event."

Avoid the queues and pre-register for BTME 2016 NOW by heading to www.btme.org.uk and clicking on the 'Register Now' tab on the right hand side. We've listened to visitor and exhibitor feedback and altered BTME's opening hours - details are on the BTME website homepage.