9 The story so far

The Story So Far

We are now two thirds of the way through the 2005/2006 football season and the excitement never seems to dwindle in our industry or the football world. Conference sides draw with Premier sides full of world class players.

Newly promoted Wigan Athletic is flying high, not just in the league but in all competitions. 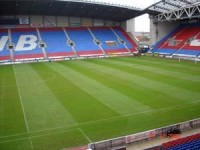 For Talbot Sports Turf Installation the season so far has seen varying challenges. At the start of the season we were called in prior to the official opening of the Pirelli Stadium, the home of Burton Albion FC. We re-turfed an area using 42" wide rolls of 40mm custom grown rootzone turf in big roll format.

In mid December we were asked to price for a pitch re-turf at the J.J.B. Stadium at Wigan.

The stadium has a Desso pitch that has been down since the stadium was constructed in the late 1990's. Due to Wigan playing both football and rugby at the stadium, the window of opportunity for remedial work at the stadium is very limited. Consequently the pitch was showing signs of wear and tear from the heavy playing schedule that it receives from two winter sports being played at such a high level at the stadium. The club decided that their high premier league position commanded investment in a new pitch for the remainder of the season.

A 14-day break in the home fixture list saw an ideal time for a full pitch re-turf. Following this, the club's schedule promised seven home matches in 29 days. An awesome schedule for a newly laid pitch during the playing season particularly in the months of December and January.

With these contracts, invariably you are expected to respond immediately and therefore you must have the resources to hand together with the experience and expertise to carry them out. 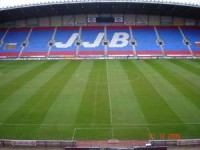 Once the playing surface has been removed and the surface prepared ready to receive turf you witness a steady stream of articulated lorries arriving and what seems to be an endless supply of Big Roll turf, which has a very short shelf life, and therefore requires installing immediately. Whilst all this is happening there is also a massive clean-up operation going ahead to remove the old pitch surface off site so that the stadium is ready to receive tens of thousands of fans plus television and radio reporters for the next match if televised.

These contracts are always carried out under a certain amount of pressure and the uncertain nature of the British weather can bring added challenges. At the J.J.B. Stadium we lost three full days due to inclement weather, something that is impossible to budget for.

We are looking to move forward with every pitch re-turf that is carried out. We are constantly improving machinery to try and cut down on the time required to carry out these contracts, at the same time achieving a surface that is more than acceptable for the client and ready to receive players valued up to and in the region of £30 - 40 million each!

The result at Wigan Athletic is a pitch that has stood seven home fixtures in 29 days in December and January and a run of results the home team can be very proud of and keeps them challenging in all three domestic trophies.

we received an SOS call from Burton Albion FC, who, in less than 72 hours, would be playing Manchester United in the third round of the F.A. Cup. This was to be the biggest match in the club's history, not only from a profile point of view but also from a financial point of view.

The pitch we saw on the Thursday evening resembled something like a cross between the Sahara Desert and the Himalayas!

Burton Albion had experienced problems throughout the season on their newly constructed pitch. Just days before Talbot Sports Turf Installation became involved some drainage work had been carried out and following this work 40 tonnes of sand was applied to the playing surface. The resultant effect was a pitch that was very undulating and had no apparent grass cover due to this being covered with sand. At this point the United game looked very unlikely to go ahead.

We assured Chairman Ben Robinson that they could improve the playing surface and would try to achieve a result that would be acceptable for a football match. 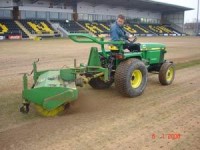 This agreement with Burton Albion resulted with equipment arriving on site on the Friday morning and a team of 10 staff working right through to 3 o'clock on Sunday prior to a 4 o'clock kick off. The pitch was rolled a number of times and the sand was brushed into rows ready to be shovelled off the pitch.

The sand was removed to show some grass cover on the surface. This grass was brushed up to try and achieve a cosmetically acceptable football pitch by now with very reduced undulations so as to enable a football match to go ahead.

The referee's inspection showed that all the work was worthwhile and through the media of television the match was viewed all around the world. 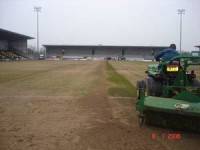 We have all as football fans, players, pundits and neutrals spent a weekend of F.A. Cup 3rd round draws, witnessing some real excitement and emotional moments. That is something that attracts everybody to football and we must ensure that it continues in the future. All that excitement will soon be forgotten and criticism will be made of football pitches and Groundsmen. People will be talking about putting roofs on stadiums and the future of artificial pitches at the highest level.

But, let's not forget a number of things that cause winter sports and especially football to be so exciting

· The weather - wind, rain and conditions that they create, whether that be on the pitch or restrictions to a player's ability or even as an advantage to a player with less capability

· The bobble of a ball on a lower league pitch

· The element of human error

Would we ever want to lose the excitement of football in general and especially that seen in the F.A. Cup which has historically been one of the televised sporting events to have the highest viewing figures on a world- wide basis.

As someone who witnessed Burton Albion's draw with Manchester United in the 3rd round of the F.A. Cup, PLEASE don't take all of this away by making the playing field too level!!!!