Much has been made of the possibilities of using sugar and its derivatives to get the turf going, with many reasoned explanations behind this, some of which are increased microbial activity and energy supply.

His company has developed a range of natural products that are proving to be most effective as bio-stimulants.

Bios Turf Tonic contains selected 'sugars' complexed in solution with synergistic growth promoting nourishments that are applied throughout the year to all turfgrass surfaces as a root drench.

"Research carried out by a London University has shown that grass growth can be stimulated simply by increasing bacterial and mycorrhizal levels in the rootzone, tests with a single application of Bios Turf Tonic showed significant increases" says Mark. 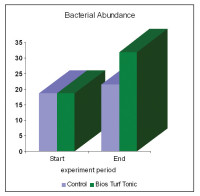 In the study, core samples were taken from a tee area at the Berkshire Golf Club. The sward within the cores comprised mainly Agrostis with Poa and Festuca. Soil from the cores was used to culture bacteria, while the roots were washed and stained to reveal mycorrhizal fungi structures within them. Clippings were measured for sward colour and total nitrogen content.

The product was applied to ten of the cores, with the application repeated as advised. The process took place over a ten week period to establish effects on soil microbes and grass growth.

Bacteria, which was reasonably abundant in the soil at the beginning of the trial, saw a small increase in the untreated sample but, ten weeks after the first application, levels in the treated cores increased by 71%, suggesting that Bios Turf Tonic has the ability to substantially elevate the numbers of culturable bacteria within the soil.

Mycorrhizal colonisation of the roots increased by over 83% from 12.6% to 23.1%, considered to be a large growth in mycorrhizal terms. While levels in natural grassland can be as much as 50-60%, they are much lower in fine turf due to the continuous clipping which reduces the amounts of carbon fixed and hence the nutrients to feed the mycorrhizae, limiting fungi abundance

Biomass content in cores treated with the product was also significantly higher - 3.24 times as much biomass was removed from treated cores than control cores. Testing the clippings also revealed that on a scale of 1 to 10, the average colour score had increased from 6.4 to 7.8, while the untreated sample had a score of 6.5.

"Bios stimulates multiplies and sustains mycorrhizae and favourable bacteria, keeping the soil temperature up and releasing soil nitrogen which promotes healthy growth early and throughout the season" explains Mark.

Nitrogen levels increased by a small amount in the treated samples, while it decreased in the untreated cores. As no fertiliser was applied during the course of the study, researchers suggest that Bios Turf Tonic also seems to be able to stimulate N uptake by plants. 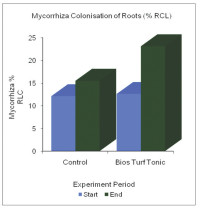 "An increase in total bacteria can lead to greater N availability in the rootzone, through enhanced N mineralisation. Furthermore, free living nitrogen fixing bacteria may also have been stimulated to grow and thus fix more N. There is also evidence that mycorrhizae can increase nitrate uptake by the plant and, as the product boosted fungi growth, this may also account for the increase. This data is most interesting, because they suggest that Bios Turf Tonic can increase N availability to plants without the use of chemical and artificial fertilisers."

"As with all things in nature, balance is the key, therefore bacteria and mycorrhiza need a range of different sugars and other foods, so using granulated sugar or molasses on its own is only going to have a limited effect. Our product is complex, blending not only carbon feeds (sugars) but other elements vital to healthy plant growth."

"To obtain maximum benefits from bio-stimulants other factors have to be conductive to soil and plant health. Turfgrass or other plant species are reliant upon the many characteristics of the soil or rootzone in which the plant is supported" says Mark.

There are further benefits too, of increasing levels of sugars and other nutrients in the rootzone.

Active roots have been noted at depth greater than 150mm in cricket wickets through the winter months and during the season enabling better drying and stability.

Recovery of nutrients contained in dead organic debris from roots and other organic matter is returned to the soil matrix for re-use, as plant and microbes communities are balanced and thrive.

Bios Turf Tonic is simply applied using a conventional sprayer or, for even more efficiency, from the AM applicator mounted on an aerator. It does not require time consuming dilution or mixing as sugar products do, and can also be combined with other nutrients if required. It is also very economic and can be applied for as little as £80/ha.

Mark comments "Individual sugar products may have a visual impact on the turf by feeding some bacteria and fungus, but a much sweeter result can be gained with bio-stimulants. Bios Turf Tonic has proven, in these trials, that it can have a significant effect in boosting turf and rootzone potential under difficult conditions at a lower cost than a single source carbon like sugar."