1 The threat of red thread disease 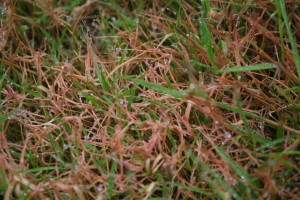 In recent days, members have been asking questions about red thread in turf, it seems to be quite prevalent at the moment. This is partly because the weather has recently turned very wet, with relative high air temperatures.

Heavy rain has leached out beneficial nitrogen reserves, leaving our grass plants in a state of stress and susceptible to an outbreak of this disease.

Red thread is an extremely common turfgrass disease that can develop at any time of the year during cool, wet weather, but frequently appears most severely during late spring and autumn. It can develop on most turfgrasses but ryegrasses, meadowgrasses and fescues appear to be more commonly affected. This disease is often referred to as an indicator of low fertility and symptoms will often develop more severely if nitrogen or potassium is limited.

Red thread is caused by the fungus Laetisaria fuciformis. The initial symptoms of infection are water-soaked areas of leaf tissue, but these often go unnoticed. As the infection progresses, the infected leaves rapidly dry, become straw-coloured and appear as irregular patches across the sward. Patches can range in size from 5 to 50 cm in diameter and will often develop characteristic red needles (sclerotia) throughout the damaged area.

The sclerotia are aggregations of countless strands of very pale pink fungal mycelium which grow out of the infected leaf tissue and become wound tightly together appearing pink or red when complete.

The development of these 'needles of mycelium' allows the infection to progress by enabling the fungal mycelium to spread over the turf under humid conditions. Once the sward is dry or the relative humidity around the turf is reduced, the needles become desiccated and brittle. They then become dislodged from the infected plants and fall to the base of the sward where they will remain until favourable conditions return. 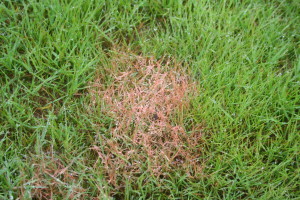 Fungus spores can remain viable for up to 2 years, survive temperature as low -20°C or high 32°C, This fungus is capable of growth at pH 3.5 -7.5 this means that the disease can occur on almost any amenity turf rootzone.

The disease can be spread by infected clippings and direct movement of the sclerotia but the fungus also produces arthroconidia (fragmented mycelial strands) that can be windblown over long distances.

Red thread is almost invariably a foliar disease and although the causal fungus has the ability to enter and damage the crown tissues, it very seldom does. Because of this, the symptoms of the disease can frequently be reduced by light nutrient applications and removal of the diseased tissue by boxing off the clippings.

However, there are increasing reports of this disease developing on turf that has been maintained under adequate nutrition and in such instances, symptoms will not be satisfactorily reduced by nutrient application alone. Where red thread regularly causes damaging symptoms, it would be worth considering over-seeding with grass cultivars that have been bred with reduced susceptibility to the disease.

Red fescues: slender and strong creeping red fescues (Festuca spp.), Perennial Ryegrass (Lolium perenne L.) are the main susceptible species affected by red thread other grasses which can be affected are bentgrasses (Agrostis spp.) and (Poa sp.) The above grasses are used in most sport turf situations including Golf, Bowls, Cricket, and winter game pitches.

Keeping the sward healthy and using resistant turf grass species will reduce the incidence and severity of disease attacks. Apply a balanced fertiliser programme with emphasis on nitrogen input. As we head into June, the levels of grass growth should be at a peak for the year. This means a lot of mowing for greenkeepers, but more importantly a greater requirement for essential nutrients.

Playing surfaces should be monitored closely for signs of nutrient stress, and, allied with soil sample results taken in the spring, fertiliser choices can be made to suit the conditions and type of grass/soil present. In recent years we have seen the production of improved slow release fertiliser products, along with a wider range of liquid fertilisers. This has led to a more little and often fertiliser regime to maintain turfgrass health.

There are other products such as wetting agents, growth regulators, soil amendments, and bio stimulents that can be applied to improve soil conditions and plant health.

The increased growth rate will lead to accelerated thatch accumulation. Utilising the various ways of reducing this is of paramount importance to reduce the occurrence of disease and other problems further down the line.