0 The trials and tribulations of Essex's non-league grounds staff

WITH the festive season approaching, the games are coming thick and fast in local non-league football. But there is arguably a group of people at each club that are even busier than the players that take to the field two or possibly three times a week. 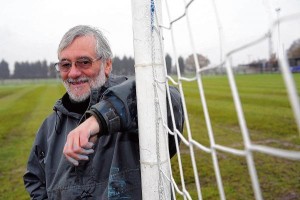 Teams of grounds staff have been doing overtime in the past month to ensure matches go ahead and, although not always successful, the hard-working individuals say it is no mean-feat ensuring surfaces across the league are playable.

Having been at the club for 18 years, Terry has seen dozens of matches fall foul to the weather but he is determined, along with Pat Hayes, Fred Dennis and Dave Whiffin, to make sure Hullbridge's season is as unaffected as possible.

"It's a hard job," said 67-year-old Terry who was unable to save Hullbridge's FA Vase game against Great Yarmouth Town from being postponed on Saturday and is now working around the clock to try to get the rescheduled game on tonight.
"I have been doing this for a long time now and it is impossible to keep the game on every time.

"I was invited to sit on the committee when I first joined in 1996 and then moved onto become the club chairman. I did that for seven years and went on to get the club charitable status before I took up this new role. And, despite its difficulties, it is a job I enjoy very much."

And Terry has more to contend with than most, with the entire ground situated on at least 10ft of clay!

Sports have looked to reduce the drainage concerns over the years with their own installations but these no longer work.

The club are consulting with firms about replacing the turf, although that would push the club's coffers to the limit, with even a 3G artificial surface under consideration.

One game that did go ahead, against the odds, was Sports' recent FA Vase win over AFC Rushden & Diamonds, and Terry said he doesn't know how his team managed to get that match on.

"It was very hard work," he said. "We got there early that morning and had some help from the players and their families - Bobby Mason's (goalkeeper) dad helped out and people coming together like that give these games a chance. It was a magnificent effort.

"We used a verti drainer to get the surface water up but to get the result that day was a terrific achievement. It made all of it worthwhile."

Terry, a former manager of East Thurrock United, only took over the groundsman role this summer, and spends three mornings a week checking the pitch.

And he is sure there will be plenty more pitch inspections and postponements before the season is out.

Impressively, Southend Manor had had no postponements this year at Southchurch Park until the visit of Basildon United on Saturday, although the Bees' TLM Stadium has been badly affected by rain this term.

Four Bees matches have been called off this term, including last Wednesday's game against Eton Manor, meaning they haven't played a competitive game since November 15.

And, but for the work of manager Craig Gillam, it could have been more.