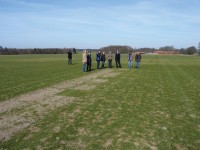 The UK climate can only be described as variable. I can remember my grandparents talking about the floods in the 1950s, and the winter of 1963. Most of us can remember the summer of 1976 and, more recently, last winter. Simon Taylor, UK Sales and Marketing for Eurograss BV, discusses the characteristics that make good winter tolerant grasses.

It's one thing predicting weather, but how do you predict what characteristics to breed into an amenity grass with all the unpredictability of the challenges thrown at us by the weather? If hard winters are going to become the norm, then cold tolerance and winter hardiness are going to be very important traits in grasses for our football and rugby grounds.

Winter hardiness has long been a breeding objective by the Euro Grass breeders as their material cuts across a wide European climatic region, and cold tolerance and winter hardiness are important for areas such as the Scandinavian countries. We in the UK experience almost tropical conditions in comparison to Scandinavia but, nevertheless, we can see conditions that are very detrimental to growth, ground cover and visual appearance.

Winter hardiness and cold tolerance can be classed as two separate characteristics, although very closely linked. Winter hardiness is a measure of the grass plant's ability to survive the winter period, which can be a multitude of conditions from low temperatures, low light levels and disease attack. An ideal grass is one that comes through the winter with as little loss to plant population as possible.

Cold tolerance can be seen more as the ability of the grass plant to grow in cooler temperatures and not sustain cell damage under frosted conditions, a characteristic much sought after by most groundsmen.

Plant selection by breeders is largely influenced by the location of their breeding programmes. If trial areas are located in mild regions, places such as near the coast, there is a low frost risk and, therefore, those plants susceptible to frost will not naturally be selected out. Equally, those trials based in regions experiencing longer periods of cold and sub-zero condition for several weeks during the year will present plants more capable of surviving those conditions. It's survival of the fittest according to the prevailing conditions. 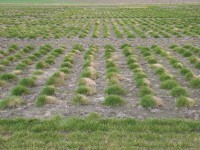 Greater differences in turf quality are seen during harsh winters compared with mild ones. Results show that the origin of material is also a key factor in determining a cultivars performance during and following a winter.

The interaction of genes responsible for a grass plant being cold or frost tolerant is a complex process. Some grasses, such as fescues, naturally have molecular structures capable of surviving extreme cold. However, they are not suitable for our winter sports pitches. Perennial ryegrass is the main species, along with smooth stalked meadow grass, although the latter is only found in newly laid turf rather than being introduced to pitches through overseed renovation work.

Climate changes are predicted to give more unstable winter climates with more cycles of freezing-thawing. These climates will create new combinations of winter stresses and, in many cases, increasing stress for perennial plants. Even though research has uncovered important molecular systems involved in winter survival and tolerance to cool environments, there is still much more to understand about frost tolerance.

We need to understand how plants sense temperature changes and more about the role of carbohydrate reserves within the plant during different types of winter climates.

The winter months are normally associated with low light levels but, in fact, light intensity can be very high during bright winter days or under lighting rigs. Under these conditions, plants can sustain cell damage when trying to photosynthesis and respire in temperatures that do not support these activities.

A better understanding of these processes is required in order for grass breeders to predict and stay ahead of the effects of climate change, and develop grass cultivars with superior combinations of winter survival and improved recovery for our winter sports grounds.

For amenity grass breeders, success is all about selecting new breeding stock with the correct genetic background in the first place. Species is a huge factor and, over thousands of years of evolution, certain grasses have adapted to surviving cold winter climates.

Unfortunately, these very characteristic make most of these naturalised grasses unsuitable for the rigorous demands of our sports grounds. We don't want grasses that virtually hibernate for the winter. Groundsmen are, therefore, attracted to grasses that grow at every opportunity in periods of increased winter temperature, but a word of caution.

The Annual Ryegrass types have very poor winter hardiness, and ground cover will be very much compromised during the winter. Through real winter conditions all Annual Ryegrasses will be killed completely, as turf-trials have shown. The accompanying images demonstrate this to great effect.

Amenity perennial ryegrasses still offer the best combination of winter durability and ground cover characteristics for groundsmen in the UK. They are a tried and tested formula that works and reduces the risk of losing valuable ground cover during our unpredictable winters.