0 The true cost of demos 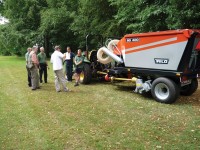 It's quite the done thing, isn't it? You have an idea that a piece of kit might do a job for you, but you're not sure, so you ask for a demonstration. The dealer, or supplier, is always ready to oblige and there's no onus on you to buy. That's the nature of the game.

But, have you any idea what that demonstration has cost? In the old days, when petrol was under £1 a gallon, and you could put a trailer on the back of any vehicle, it was probably quite a reasonable cost and well within a company's' budget. But, nowadays, it's another ball game - that cost could be costing you a decent discount off the manufacturer's list price.

Tony Evans, of PR Company Pan Publicity, canvassed opinion from three well known names in the industry to find out their perspective on the issue.

Tim Merrell, Managing Director of Newmarket based The Grass Group, says the true cost of a demo is something they've really started driving through to dealers. For a while now, they've been offering different levels of discount according to whether or not they have to do a demonstration. He believes the industry has already started making some 'unseen' changes in regard to demonstrations.

"The reason I say unseen," he explains, "is because the changes are unseen to the end user. In the past, the cost of a demonstration was already factored into the final price of a machine but, by not having one, the dealer can either get a better profit margin, or offer the end user a better price, simply by cutting out our a demonstration." 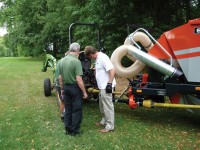 However, Tim accepts that there are just times when a demonstration is absolutely necessary. But, he does think that end users need to be educated on the real cost of a demo which, he says, works out on average at about £500 a day when you take into account labour, expenses and travel.

"I think that, if we do this, people will start to appreciate the importance of a serious demonstration and appreciate our service more. In particular, customers need to be made aware that, if we have to visit them more than once, these multiple demos adds considerable cost to the final price."

He cites the golf sector as one such culprit. "You will go and see a greenkeeper to demo a machine. He says he likes it but, later on, we'll get a phone call to say he wants us to go back so that the committee, greens chairman or secretary can see it as well. This just duplicates our costs."

Nick Darkin, Sales Manager at Charterhouse Turf Machinery agrees, "Customers still want demos, but I don't think they appreciate the cost involved of getting the unit to them. Transporting machines around the country for Dealer Open Days, exhibitions or regional demos has always been expensive, whether you use haulage company transport or your own reps running 4 x 4 vehicles with trailers." 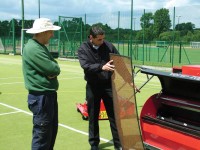 "We're now faced with having to have tacos fitted in order to use the trailer, and there's a surprising cost element involved in those - you can be looking at over £2,000. Factor in £7,000 for depreciation, tax, insurance and service - that's before a wheel has moved - and then add fuel at over £5 a gallon and Tim's £500 a day is quickly reached."

For Dave Roberts, Sales and Marketing Manager at Kubota, demos are a key part of their sales process. "It can be the make or break part of the deal," he says, "and Kubota's investment in demos is huge. We have around a million pounds worth of our own demo kit, and that's in addition to our dealers' demo kit which we also have to supply."

Whilst he accepts it's a massive cost to Kubota, he does believe it brings about rewards as they, fortunately, seem to have a reasonably good success rate. The demo has become the final part of the sales process.

For Kubota dealers though, Dave does recognise there is a cost implication for them having to hold demo kit, and that they have a more onerous task in doing demos. "They have to decide what products to carry in their demo kit and, let's face it, we do have a wide range of products. But, we have seen our dealers 'qualify' the lead more before they demo."

This qualifying is helped by what each of them sees as a better informed customer. Tim has seen the use of the internet being of real benefit to both his business and the end users. "Groundsmen and greenkeepers are more time starved than they ever have been, and they don't want to spend more time on demos than they need to," he says. We've also seen a reluctance to support regional demos, with a preference to research the internet and have a real handle on what they are looking at before we are asked to demo." 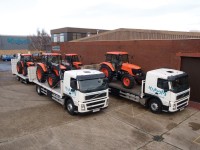 "We can direct the end user to our website in advance and they, in turn, can use it to brief their committee and show them videos. By the time we turn up, they have already become accustomed to the machine and, hopefully, looked at their budgets. This speeds up the decision making process and helps stop the need for more than one visit which, as I said before, is very costly."

This is a view shared by Nick Darkin. "These days our customers have usually done their own research on the web, so they're quite serious about buying by the time they ask for a demo. This makes a demo less likely to be a waste of time, as the customer has checked out which model they want to see on our website, and are, therefore, much better informed about the machines."

"As Nick has already said," commented Dave, "customers are a lot more savvy now - they've done their homework either through our website or from a Dealer Open Day." But, for him, and Kubota, the issue is greater in that they have a huge spectrum of customers - from private users to farm managers and owners. "For example," he explains, "a demo to a private user on an estate will usually result in us leaving the machine with the customer. If the machine does the job they expected it to, having researched it on the web, they write out the cheque and we leave the machine with them."

"A sale to a groundsman or greenkeeper is much more complex. They might be looking for the unit to perform several tasks and may, therefore, need a few more hours of the dealer's time on a demo. But, their initial internet surfing has shortened the sales process."

The utopia for all is the day when they take a machine on a demo, leave it with the potential end user for a couple of days, let them see what it can do and then make a serious, well informed, decision about purchasing.

Tim adds a caveat to this wish, "The practice of 'lending' a machine to an end user to assess, for days on end, is no longer acceptable in my opinion. If someone wants to demo a machine over a prolonged amount of time, I will now hire them a machine, and take the hire cost off the price of a machine should they go on to make a purchase. This prevents people taking liberties."

He would encourage everyone to follow his lead with this. "When dealers had loads of product in stock and making lots of sales, this type of practice was okay. But, now, there is less business around these days, and dealers don't want to hold too much stock. So, we have to provide the equipment and travel the great distances to recover the kit."

It remains to be seen whether internet action will take over conventional sales routes such as demos and exhibitions, but it is clear that cost will once again drive the market - although history shows us that change sometimes brings about a repeat of the past!

Regional demos has been seen as the most cost effective avenue, by a number of companies, over the last ten years but, with so many doing the same thing, cries have been heard for "all of you to get together in one place, as we don't have time to come to all of the events!"