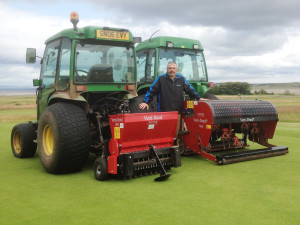 Craigielaw Golf Club is a challenging 18 hole championship golf course designed by Donald Steel. Situated on Scotland's Golf Coast, just outside of Edinburgh, Craigielaw greens are undulating so finding the right over-seeder was a challenge for Head Greenkeeper, Brian Mckendrick.

"We had never had a dedicated over-seeder since the course opened in 2001," said Brian, "probably because of the undulating nature of our greens making the selection of one difficult. However, a few years ago our local dealer, Sheriffs of Haddington, let us trial their Redexim Verti-Seed 804. We found the floating bracket combined with the individually sprung shoes followed the seed tubes to help the Verti-Seed float over the contours of our greens - job done!"

Brian and his six full time members of staff have found the Verti-Seed to be exactly what an over-seeder should be - easy to use and easy to adjust. It achieves an even spread of seed; at an even depth; over contours. Brian again, "For a small machine, it does a relatively quick job as it simultaneously closes the gaps, leaving you to just brush the surface and leave it. We use it on a small tractor so we're not putting the ground under excess weight/pressure. It is straight forward and easy to use with minimal maintenance meaning everyone on the team, including the apprentices, are using it."

The course adjacent to Craigielaw had purchased a Verti-Seed prior, so Brian has found himself sharing tips with them!

To complement the Verti-Seed, Brian took delivery of a Verti-Drain 7416 at around the same time. Dougie Archibald, from Charterhouse Turf Machinery, did the initial demo but Brian didn't think it was going to be man enough, "it looked too lightweight," he said, "but it turned out to do far more than we even wanted it to! For a relatively lightweight machine it does a very effective job and causes little damage."

Craigielaw has very firm ground - built on farmland but with Links style fairways so they have areas of sandy and soil loam. They are using the Verti-Drain on greens, tees, approaches and walk-offs and use a contractor, with a bigger Redexim Verti-Drain, to do the fairways because of the larger area and varying conditions involved.

Brian says downtime for the 7416 is minimal as "there are a lot of sealed bearings, but those that are not are easy to maintain. We have found it very easy to set up and look after, even for a small team like us who are always on the go, with limited down time."