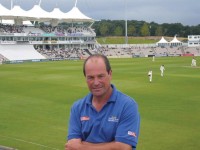 "I need to knock out another Test match wicket to prove the last one was no fluke!"

There have been more ups than downs in the career of long-serving Hampshire County Cricket Club's Head Groundsman, Nigel Gray. One of the few survivors from their old home at Northlands Road, the 59-year-old has been one of the county's most recognisable characters for more than two decades.

Now in his twenty-third season, he recently launched his well-deserved testimonial, with patron Shane Warne, at The Ageas Bowl, fittingly at the end of the second day's play against Leicestershire - the county of his birth.

It says something for the respect in which he is held that he is only the third groundsman in Hampshire cricket history to be awarded a testimonial, following in the footsteps of Jesse Hopkins (1922) and Ernie Knights (1975).

Having moved south with his family aged six, Gray became an adopted son of Hampshire. He started life with the county back in 1989.

After graduating from Keele University with a geography degree and, whilst working on pitches at Taunton's College, Upper Shirley in Southampton for Hampshire County Council, Nigel was 'spotted' by two of Hampshire's other Old Tauntonians - chief executive Tony Baker and cricket committee chairman Charlie Knott.

He soon became part of the fabric of Northlands Road and even lived there during the 1990s, next to the nets where the likes of Malcolm Marshall and Robin Smith honed their skills.

Within two years of being appointed assistant to Tom Flintoft, he was promoted to head groundsman when his colleague returned to his native north east to work on Durham's new Riverside Ground at Chester-le-Street.

Nigel's arrival coincided with one of the most successful periods in Hampshire's history with the side, captained by Mark Nicholas, having already won the 1988 Benson & Hedges Cup. Nicholas's team then added the Natwest Trophy in 1991, before lifting the B&H again the following year.

Nigel had a growing trophy cabinet of his own during the 1990s, winning two ECB groundsman of the year awards.

"Northlands Road had a good reputation as a very secure batting pitch with lots of runs, quick outfield and highscoring games - it wasn't the bowlers' place to be," he smiles. "But it was such a well-established, flat square, it was very difficult to generate result wickets."

Nigel's job became far more challenging when Hampshire moved from their quaint old home to the Rose Bowl (now The Ageas Bowl) at the turn of the century.
Like the Northlands Road bell - which makes considerably more noise - he was transferred to the Rose Bowl in 2001, where his quiet diligence helped establish a ground that is the pride of the south.

But it has been far from easy. He readily admits the lowest point of his career being back-to-back games midway through the second season of first-class cricket at the Rose Bowl, in July 2002.

The wicket used for Hampshire's match against India was so capricious Sachin Tendulkar and Rahul Dravid refused to bat in the second innings. They considered the pitch too dangerous, even with fast bowler James Tomlinson taken out of a Hampshire attack, but still including the medium pace of James Hamblin, Will Kendall and Lawrie Prittipaul.

A few days later, Chris Tremlett and Lancashire's James Anderson both made the most of similar conditions, claiming their maiden first-class five-wicket hauls during

The pitch was bad enough for Hampshire to be docked eight points. "We obviously knew settling a new ground would take time, but didn't envisage it taking as long as it did, and didn't realise how big a challenge it would be," admits Nigel.

"We had a year when it wasn't easy. We left pitches a bit damp in the first year, and then tried to be more adventurous by drying them out more in the second year to get more pace out of them. In hindsight, it was too early to be doing that."

Nigel sought some advice from Flintoft but, as he was literally treading new ground, much of his work came down to trial and error. "We were always coming up with theories," he says. "At that time, we knew the pitches would crack at some point during a four-day game, but it was a case of trying to ensure that process happened as late as possible. We got the pitches for those India and Lancashire games too dry, they were uneven and a problem."

"That was the worst time, and I try not to remember it! If I could do one thing again, it would be to use the heavy roller on the squar 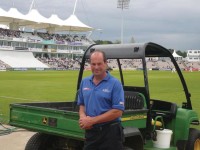 e a lot earlier than we did. We probably should have started to roll it as soon as it was laid. The ground was built in 1997 but we didn't play on it till 2000, and I thought leaving it to mature on its own until then was the best thing to do."

Gradually, the Rose Bowl pitches improved. Midway through the 2003 season, Hampshire won after following on against Glamorgan. "When that happened, I thought we were going in the right direction," says Nigel. "And, when John Crawley started to score a lot of runs on a regular basis, that also gave me hope that things were getting better."

Since then, Nigel has prepared pitches for no fewer than sixteen internationals, including thirteen One Day Internationals. "We produced good pitches for one day cricket from the start, but the first ODI - South Africa v Zimbabwe in 2003 - was a steep learning curve. I may have left it grassier than I should have done," he says.

His attention to detail culminated in the success of the inaugural Test match, between England and Sri Lanka last June. He was lauded by all and sundry for the quality of the surface, as well as his team's efforts during the rain-affected match. It was, without question, the highlight of his career so far.

"I knew it was going to be a good pitch, it felt right from the start," he smiles. "Sometimes, you just know when a pitch is going to play well, it felt flat and hard. But it would have been nice to have had five days' play!" 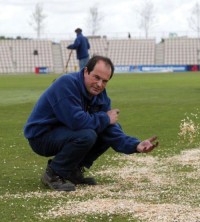 The Test pitch is one of nine out of twenty on the main square that includes more sand in its loam than the others (a successful formula happened upon as part of an ECB experiment).

There have still been anomalies, with the pitch used for Lancashire's visit a decade ago not the only one to cost Hampshire points.

The county began last season's T20 competition with minus two points because of a mischievous wicket - demonstrating excessive unevenness - used for a televised Twenty20 group game against Somerset in 2010. "That was a one-off, something went wrong in the preparation and, to this day, I still don't know what," says Nigel.

But, two months later, Hampshire enjoyed one of the most memorable occasions in the county's history, winning the 2010 Twenty20 final against Somerset under the Rose Bowl's floodlights. Nigel played a starring role, and not just for ensuring all three games were completed, despite the rain. 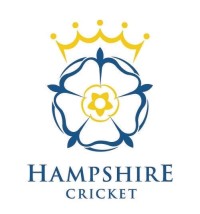 With Jimmy Adams on as Dan Christian's runner, a global audience saw Nigel scamper on with his white paint to extend the crease markings in the dramatic final over.

Nigel has also seen Hampshire win Lord's finals, but there is one trophy he would love to see back at the county before he retires. He was a student, hoping to go into town planning, on one of his early visits to Northlands Road in August 1973, when Hampshire beat nearest rivals Northants to take a giant step towards their second and most recent County Championship.

As well as seeing Hampshire recapture that crown, he has another goal in his sights. "I don't want to be a one-Test wonder!" he laughs. "I need to knock out another Test match wicket to prove the last one was no fluke!"

India's return in 2014 will be the perfect opportunity for Nigel to put to rest the gremlins of 2002, once and for all.