0 The US Open - working as a volunteer

As soon as I found out Merion Golf Club had been awarded the 113th US Open Championship, I was straight onto my computer sending an email to Matt Shaffer, Director of Golf Course Operations at Merion Golf Club. asking him to get me onto that volunteer team.

I have worked four tournaments in my greenkeeping career; The 2003 Benson & Hedges International at The Belfry, The 2004 Shark Shootout at Tiburon Golf Club in Florida, The 2005 Players Championship at Sawgrass and The US Amateur at Merion Golf Club.

It is because I participated in The Ohio Program, run by Mike O'Keeffe, in 2004 and 2005, that I had the opportunity to be a part of these tournaments and, because of the experience interning at Merion and being a part of the US Amateur there in November 2012, I was notified I had been awarded a place on the volunteer team.

So it was all systems go from then on, and to be on the team for the second Major of 2013 at such a historic venue was an opportunity that I didn't want to miss.

This Hugh Wilson designed course is where, in 1930, Bobby Jones famously completed his grand slam on the 11th hole and, in 1950, Ben Hogan hit a miraculous one-iron shot to the 18th green to make par and secure a play-off, which resulted in him winning the US Open on Merion's East Course. All this history is packed neatly into just 130 acres and is surrounded by residential houses, with Ardmore Avenue running straight through the middle of the course and a train line running down one side.

The passport was renewed, the flights were booked and the USGA security background checks were completed. Hotel accommodation, meals and apparel were provided for all volunteers.

I had to be at Merion for a mandatory staff meeting at the maintenance facility on Sunday June 9th at 4:30pm. So, I was up at 6.00am UK time on the 9th to catch an 11.00am flight out of Manchester Airport to Philadelphia, which would get me there at 1.50pm Eastern Standard Time. I was picked up by two familiar faces that I had worked with at Merion in 2005 - Scott Bordner, now Superintendent at Chicago Golf Club, and Chris Allen, Superintendent at Keysborough Golf Club in Australia. Merion is about a thirty minute drive away from Philadelphia airport, so we had enough time to check into our hotel, have a bite to eat and get to the meeting. 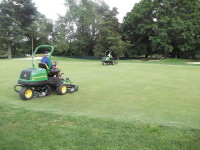 The meeting mainly consisted of getting to know everybody, and letting them know whether they were going to be working on the East Course (the tournament course) or the West Course, which is were the practice facility for the week was located due to logistical reasons. We also got issued with our apparel and had a good look around the East Course and the maintenance facilities.

All the volunteers were made to feel very welcome and we were very well treated. We were given breakfast in a huge, air-conditioned marquee that had been erected inside one of the greens department buildings. This is where the East Course Superintendent, Arron McCurdy, did a role call every morning telling each individual what job they would be assigned to do. 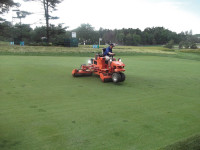 My morning job for the week was to cut the 11th and 14th greens. They were double cut mowing straight back down the line just mown. There were two teams of back pack blowers dotted around the course - one on the front nine and one on the back nine - with everybody in contact via Motorola radios so we could call upon a couple of blowers if any of our greens had any kind of debris or bunker sand splashes on them.

We used turning boards on the collars to prevent wear and to avoid overlapping the edge of the green. Immediately after the double cut, the greens were rolled with Salsco rollers in the opposite direction to the cut.

After morning assignments, we were split into two teams, either divoting tees and fairways or grabbing a rake and going out to fluff rough around the greens and fairways prior to play commencing. 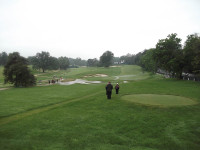 The USGA, and everyone involved at Merion, were hoping the course would play firm and fast, but Mother Nature wasn't cooperating. The previous week, Merion had recorded six inches of rain and, at 6.50am on Monday morning, rain that had been forecast rolled in - and it was constant, torrential rain. One inch fell in just thirty minutes.

Play was due to begin at 6.45am, but was delayed for about three hours. As soon as the rain stopped, every shovel, rake and pump was rounded up, and a mass operation to pump out water, fix and rake the 131 bunkers to get them back in play began. Players did get out for practice, but another storm rolled in at 2:45pm - again with torrential rain for around twenty minutes - and it carried on raining into the early evening. There was no possibility of any work being carried out that evening, so we were all sent home at 6.00pm.

The course was 'damp' in the morning. We were in for the normal start time of 4.15am but, because of the overnight rain, we didn't start until daylight. The course did have a full cut, except for the fairways, as they were deemed to be too wet. Greens were double double cut that morning to make up for not cutting the previous evening. 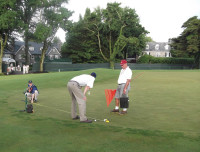 Readings of 13 to 13.5ft on the stimpmeter were finally attained on Wednesday. On the 5th hole, the USGA agreed to have a slower pace of 12ft, because the green severely cants from right to left.

Everything that is cut on the golf course is collected, even fairways, scagging* the rough around greens and the step cut around the fairways. Even though the fairways didn't appear to have a step cut, they were cut around the fairways. The cut was one width of a walk behind rotary mower with, on one side, the wheels set at the lowest and, the other, at the highest so the step cut had a slight angle to them, so there was not a sharp change from fairway to rough. 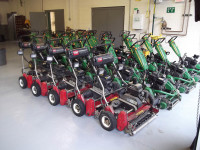 John Deere was the main equipment supplier. Twenty John Deere 220 hand mowers with floating cutting units and Wiley front rollers were used to cut greens at 0.085" (2.16mm). The blades and cylinders of these mowers were manufactured to an eighteen inch width specifically for the tournament - John Deere didn't produce an eighteen inch hand mower prior to this US Open! 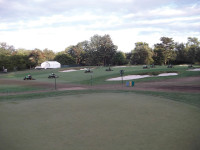 After everything was cut, everything was rolled, using Salsco rollers. Some fairways were not rolled if they were deemed too wet. Four fairway rollers, with hydraulic lift transport wheels, were used to roll fairways and approaches. Fairways were rolled 3-9 across. The rollers produced a pressure of 10lbs per sq inch. Another seven Salsco rollers were used for greens, four with hydraulic lift transport wheels and three older style models which were transported around on trailers.

Rob Smith is Matt Shaffer's Equipment Manager. As soon as the machinery had finished its work for the day (or night), it was washed down, filled up with diesel or petrol and put away ready for its next shift. All cylinder mowers were put in line, ready for Rob and his team of mechanics to blow dry clean and check quality and height of cut. You only have to look at the equipment, and at the spotless workshop, to know Rob takes a lot of pride in what he does and what an excellent mechanic he is. 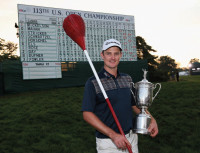 It was great to see a few English names up there at the top of the leaderboard. Ian Poulter, Justin Rose, Luke Donald, Lee Westwood and Paul Casey all had Sunday afternoon tee times, but it was Justin Rose who kept it out of Merion's notorious thick Bluegrass/Tall fescue rough, kept it on the short bentgrass greens and fairways and emerged victorious by two shots. Having an English lad, the same age as me (thirty-three) win the US Open capped off my whole trip wonderfully. The whole week was both enjoyable and exceptional.

I met some truly inspirational people in the turf industry, some old faces and some new ones; people that I will keep in touch with. This was more great tournament experience for me. Anybody wanting to progress to being a golf course manager, head greenkeeper or superintendent should seriously consider doing tournaments like this. It will help their careers enormously, and I definitely recommend it.

Thanks to Matt Shaffer for 'inviting' me and giving me the opportunity to be on the team for the US Open 2013 at Merion. Matt was great to work for during this tournament and back in 2005. His attention to detail is absolutely amazing and he encourages good communication, motivation and team spirit. Thanks to my current employers, Kirkby Lonsdale Golf Club, for letting me take my holidays the week prior to our festival week, which is one of the busiest weeks of our year. And thanks to Pitchcare for letting me tell you about it. 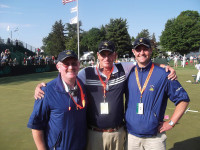 I also have to thank my wife, Hannah, for allowing me to go and leave her at home with our 2 year 8 month old boy Oliver, whilst twenty-seven weeks pregnant with our second child - thankfully the tournament wasn't this September!

A lot of thanks also go to Mike O'Keeffe because, if I hadn't applied for The Ohio Program back in 2004, none of this would have happened. So, cheers Mike.

Mike is a legend in the turf industry and has students from all different nationalities on internships on golf courses all over the world. For any 21-28 year old that is doing some form of greenkeeping qualification, with no personal ties, I would definitely recommend doing The Ohio Program - simply get in touch with Mike and put yourself out there. It will open doors in the future.

I'm still training, still learning and collecting a good vocabulary of knowledge ready for when I am ready to commit to the 24/7 life of a superintendent. That's one of the good things about this profession, you've always got to be thinking and learning. I

do believe that what you put in now is what you get out in the future. Experience, good communication skills, patience and having a great network of friends in the turf industry are priceless.

*Scagging refers to Scag pedestrian rough mowers.
Chris Hodgkinson may be contacted at chriserichodgkinson@yahoo.co.uk
The OSU's Mike O'Keeffe may be contacted via email at okeeffe.1@osu.edu