0 The Waitt goes on! 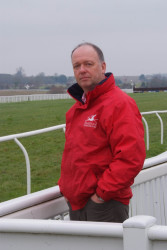 It's a rare occasion in horseracing when all you can do is sit back and wait for the weather to improve, but climate change has shifted the rails somewhat.

Yet, for the first time in many years for racecourses in the south of England, the extreme winter snowfalls have meant cancellations and mounting frustration for grounds professionals, who have been helpless to prevent cancellations and instead have had to wait for the ground to clear.

When Pitchcare visited Folkestone Racecourse, the heavy snow had all but dispersed, but only after two race meeting cancellations in the previous two months - rare for Kent's only racecourse and damaging to any bottom line.

In the depth of the white-out emerged Clerk of the Course and Estates Manager, Andy Waitt, who took up the dual position on New Year's day.

Tasked with the job of overseeing the grounds maintenance programme and the general running of the course, he was still able to raise a smile amid the mayhem caused by the weather, as he confidently predicted racing on 19 January. "We'll make it," he said defiantly, speaking against the backdrop of a rather bedraggled-looking sporting venue, recovering from its deep blanket of snow and a frozen ground that stages both National Hunt and flat racing.

But, his first days in post were taken up elsewhere. "Much of my first week was spent clearing snow from my old course at Lingfield Park, where I still live," he says. Both courses are operated by Arena Leisure plc as part of a seven-strong stable including Royal Windsor, Wolverhampton and Southwell, that stages around 25% of all racing fixtures held each year, making them, what is claimed to be, the UK's largest operator of horseracing, including the world's oldest classic race, the Doncaster St Leger, as well as the Monday Night racing season at Royal Windsor.

All of Arena's racecourses provide conferencing and banqueting facilities, two also include 18-hole golf courses, one of which also provides a leisure club, and an integrated, branded hotel at a third racecourse.

With a career spanning some twenty-eight years, Andy, 46, is now at his fourth site and, in that time, has occupied a variety of positions, placing him in a strong position to take over the reins at Folkestone.

He spent the biggest chunk of his career at Sandown Park, starting there in 1981 as a groundsman before moving away in 1997. He speaks fondly of his sixteen years there. "It's a beautiful viewing course with excellent facilities," he notes.

But, it was while at Lingfield Park turf and all-weather course in Surrey that he underwent his training as Clerk of the Course, which he completed in 2006, after rising to the post of head groundsman, then estates manager in new millennium year. "Completing my Clerk of the Course training was the proudest moment in my career," he beams. "You spend twelve days at other courses shadowing Clerks of the Course and several other days with various officials. It's a fascinating experience."

Andy retains strong links with the course and still lives on site, and talks frequently with the current man in charge there, Neil Mackenzie Ross.

His move to a new course, Great Leighs near Chelmsford in Essex, in April 2008 proved an ill-fated one. The course, owned by a local businessman and "a colourful character" was the first to open in Britain for more than seventy years - only to close a year later due to financial constraints.

Great Leighs' loss was Folkestone's gain however, and it's a course that Andy believes he can "settle into quickly", having experienced working across all three categories of venue and with both all-weather and natural turf surfaces.

An advocate of mixed surfaces in horseracing, Andy believes the benefits of having an all-weather facility have been highlighted never more starkly than this January, as Britain witnessed one of the worst winters on record, halting racing at many courses around the country.

"There's a real demand for all-weather courses, especially in the north of England, where poor weather through the winter months takes a number of race days away each year, costing racecourses dear. The loss of opportunities for jockeys and trainers just isn't sustainable during long periods of poor weather," he explains.

Despite such unprecedented weather recently and the still bleak economic climate, Andy believes the racing industry remains relatively healthy. Folkestone's fixture list numbers twenty-two race meets a season, an average number for a dual-purpose, National Hunt and flat course", with a calendar that includes one-day, evening, and high profile events such as the Kent National, and the annual United Hunts meeting.

The switch from National Hunt to flat is the indicator for many courses to start, or adjust, their year-round maintenance programme, he continues, and Andy insists that April is the best time to think about laying the foundations for the summer season of flat racing.

"I don't do anything religiously," he reveals, "only applying fertilisers when called for, with maintenance tending to follow a 'little and often' approach, depending on the weather."

Success in this job is based largely on "keeping up to date with weather patterns and knowing the right things to do at the right times. The only products we consistently use are a 9:7:7 spring fertiliser around April time, a 12:6:6 through the summer months and a 3:12:12 fertiliser through the autumn and winter."

Being blessed with extremely good topsoil, that's been established for more than 100 years, means the course suffers from few weed problems, ensuring that spraying is kept to a minimum, he adds.

A seven-strong grounds team is charged with keeping the course in fine fettle. Behind every good team leader is often an indispensable 'right hand man' and, in Andy's case, it is Assistant Estates Manager, Richard Hall (Taff to his friends) - the sites resident gardening specialist - and senior groundsman, Nigel Barton - a man with more than thirty years turfcare experience. Two of the other five valuable team members are on permanent part-time contracts, explains Andy.

The job of grounds maintenance comes with differing responsibilities - arguably the most significant for mixed racing is preparing the jumps. 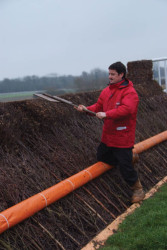 Before each winter season, seven jumps and five flights of hurdles need to be prepared, all of which the team constructs from bundles of birch. "Nigel is highly experienced in preparing them, states Andy, "as he's been doing that job for most of his career." The jumps are assembled as a unit in solid oak frames that are expected to last anywhere from twenty to thirty years.

"Each season, new bundles of birch are built into the frame and trimmed to a height of 4' 7"," Andy continues, "with the aprons constructed and kicking rails finally attached at the end before being assessed by a Jockey Club inspector for their quality, along with the rest of the course and facilities."

The yearly maintenance programme starts in spring with the team overseeding the course, a process dependant largely on how much damage there has been through the jump-racing season, explains Andy.

"We treat maintenance as an ongoing process through the summer months, using a little and often approach as the focus, watering when we need to. Having an abstraction licence means we can pump water into our reservoir throughout the winter, giving enough to take us through even the driest of summers, hopefully. By using a towline irrigation system, attached to the mains and extracted from the reservoir, we have the ability to pump a depth of 6-7mm of water across the whole course in half an hour."

Although it's irrigation that presents Andy with one of his biggest continuing headaches, "other things crop up that throw a spanner in the works and mean you have to constantly think on your feet".

"Fleece or frost protection coverings are available and many of the high profile or larger budget courses do have them but, for us or other smaller ones, it simply wouldn't be financially viable as we couldn't guarantee seeing a cost benefit." 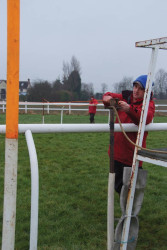 Folkestone's racing turf is predominantly ryegrass and Andy overseeds with the same species - "in my experience, it is one of the more hardy species and gives the best colour. It's important for racecourses to have hardwearing turf, and most have moved away from turf with finer grass species," states Andy.

Using local supplier Hollywell Seed and Grain Company, he likes to follow their lead as much as possible. "I prefer to put my trust in those that know best and, so far, we have always had really good mixes," he says.

Folkestone has the luxury of being a particularly wide course, which gives it plenty of room to manoeuvre when it comes to presenting the best possible conditions for the horse. "We have the freedom to move the plastic polymer rails throughout the season because we want to give the horses the freshest ground we can. But, moving rails also helps us greatly by allowing recovery for ground that's particularly hard hit in the winter."

Moving them every two to three meets usually maintains good ground, but this also depends on how well the course has recovered, which is, in part, down to how successful the vital post race repairs have proved.

Many racecourses, including Folkestone, employ a team of treaders-in to speed turf recovery. The practice has become so widespread that it has moved from purely seasonal employment to full-time work, says Andy. The firm he employs also services a number of other UK courses.

After treading-in is completed, and the turf has had time to settle in, the team are out there with the Cambridge roller, if conditions permit. "The right type of roller is crucial," states Andy. "Using a flat one would lead to compaction and panning, which wants to be avoided at all costs on a racecourse."

A team of fillers then follow with a divot mix to repair significant wounds; the mix varies according to the season. "In the summer a 30/70 sand and soil mix is used; in the winter we increase the sand percentage to a 50/50 mix, due to the greater likelihood of more serious work needed to be done over that time," Andy explains.

With an average of twenty tonnes of soil being brought in for each meeting to cover the mile and a half course, there's a huge effort aimed at repairing the ground.

A major part of the pre-race preparation is recording the going, a key consideration that determines the ground condition and whether a race will go ahead or not.

Optimum going is good to firm in the spring or summer season and good throughout the winter, notes Andy, whose job it is to record the readiness of the surface for racing.

"I first walk the course at 6.00am with a conventional pointed walking stick and later with the Turftrax going stick, to give me an overall description of the course. I then report the results back to Turftrax, which are then published on Wetherby's website, a company that collates racing information for those in the business."

The going stick gives a penetration and sheer reading, and is used as a secondary aid to trainers, yet some see its introduction four years ago as a move towards replacing the human element. Andy isn't worried though. "To my mind, nothing will replace the knowledge and instinct that comes with years of experience in the job."