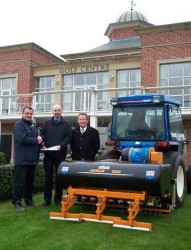 One of the first orders for the new, award-winning SISIS AER-AID SYSTEM, fitted to a SISIS JAVELIN aerator, was from the prestigious Hawkstone Park.

Hawkstone Park is idyllically situated in 400 acres of outstanding natural beauty, just north of Shrewsbury. The hotel has accommodated travellers since 1790 and the "The Follies" add an interesting extra feature for visitors. This amazing landscape was constructed by the Hill family in the 18th century - with intricate arches and passageways hewn out of the rock. There is an underground grotto and a bridge spanning an 80ft chasm. If you climb to the top of the monument, 13 counties can be seen on a clear day.

There are three golf courses. The Hawkstone Course, constructed in traditional parkland style, was opened in 1920 and two of the holes are claimed to be the most photographed in England. The Windmill Course was designed by Brian Huggett, former Ryder Cup Captain, and built in 1995 with many American-style features. The Academy Course is a purpose-built 6 hole, par 3 course ideal for beginners.

Paul Hyde has been Estate and Golf Course Manager for just 6 months but is already making his mark. (When SISIS installed the AER-AID, on a bleak January day, everything looked immaculate.) During the winter months, the drainage system on the Windmill Course was extended and refurbished, along with several of the tees on the Hawkstone Course, but Paul's priority for 2005 is an intensive programme of aeration on all three courses.

He is a strong advocate of regular aeration and studies new techniques as they come along. When he heard about the new SISIS AER-AID System he was quick to recognise the potential. The AER-AID System speeds up the aeration process by working at close centres to blast air directly into the root zone, where most compaction problems occur. 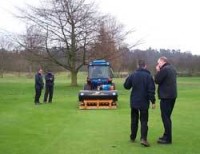 A contributory factor in the decision to purchase an AER-AID was an earlier demonstration at their sister course at Mere in Cheshire.

"When I was offered a demonstration of the SISIS AER-AID I agreed because I thought the principle was interesting but I must confess to having been a bit sceptical.

The 5th green here at Mere was very wet - when you walked across it you could see footprints. We had tried vertidraining and hollow coring - all the usual treatments.

During the demonstration I was impressed with the speed and efficiency of the AER-AID; we could actually smell the methane being pushed out at the surface, so we knew that clean air must be replacing it.

Mike Sheehan Managing Director of Hawkstone Park and a Director of Mere Golf & Country Club has been impressed with the demonstrations of the SISIS AER-AID System that he has witnessed. He feels sure that the AER-AID will contribute substantially to further improving what are already two of the finest golfing facilities in the UK.