0 There must be Sixways to use your cover! 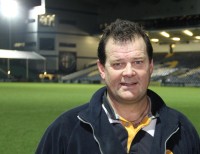 The professional sporting venues of the City of Worcester are no strangers to flooding, with the River Severn bursting its banks on a regular basis to wreak havoc at the city's racecourse and county cricket ground at New Road, both of which have featured in this magazine as the groundsmen struggled to 'turn the tide'.

However, for Martin Knight, Head Groundsman at Worcester Warriors' Sixways Stadium, water is not usually a problem due to the facility's more elevated and 'out of town' position. But, in recent months, along with many other groundsmen and greenkeepers across the UK, he has had to cope with saturated ground conditions and flash flooding as the country suffered the longest continuous spell of wet weather on record.

At a time when he should be more concerned about frost and snow, Martin has been battling to get games on as the temperatures remained in double figures and the rain just kept on falling.

For many professional winter sports clubs, the Christmas and New Year period is one of the busiest times and, quite often, can be 'make or break' in terms of league position, whilst losing a game to the elements can also prove costly in terms of lost revenue.

So, when Martin invited me to Sixways to see how he and his assistant, Stuart Lambert, were preparing for the visit of Leicester Tigers in early January - one of their more 'revenue earning' fixtures - I jumped at the opportunity.

Sixways Stadium is unlike any other development in the UK. A truly inspirational multi-purpose venue which is used 24/7, 365 days of the year. Home to both Worcester Warriors and Sixways Events, the amazing 65-acre complex is now one of the country's most exciting, dynamic and versatile venues.

It is situated only a fifteen minute drive from Worcester city centre. It opened in 1975 and is located off junction 6 of the M5 motorway, which splits into six directions, hence the name Sixways. The 12,024 capacity stadium has undergone a number of facelifts, firstly with the new West Stand and indoor training centre, followed by the impressive South Stand and, most recently, the state-of-the-art Slick Systems Stand which accommodates 6,000. There are long-term plans to increase capacity to 20,000.

I found Martin in bullish mood, even though his drainage system, which had been problematical for a couple of years, was simply unable to cope with the most recent deluge, resulting in large areas of standing water on already saturated ground. The problem was exacerbated by the rain still falling, meaning that getting any aeration equipment on the pitch to try and help get the water away would be impossible... and ESPN cameras were due in to televise the game. Oh, the joys of being a groundsman at a high profile venue!

So, with just a few days to go to the fixture, Martin's only option (other than to build an ark) was to ensure the pitch did not receive any more rain, so he put in a call to Nigel Felton of Sports and Stadia Services, to arrange for one of their tented dome systems to be employed over the pitch.

Sports & Stadia Services have, for the past ten years, provided a proven and professional back-up service to help ensure fixtures can go ahead despite poor weather. They offer a number of pitch protection systems to cater for most sporting venues.

In this case, the pitch cover was provided by Premier Rugby as part of a seasonal contract between the two companies. The contract gives Premiership rugby clubs access to five full 'MacLeod' systems throughout the season; the sole objective being to reduce the risk of match cancellations from rain, extreme cold or snow.

Due to the issues with the Sixways drainage, the system was deployed to introduce a warm air flow to help improve the stability of the surface.

The whole system can be deployed in less than three hours and taken down within the hour. The service is usually provided based on a five to seven day weather forecast, with the objective to install prior to periods of weather that might threaten a fixture. This service has been in place for four years and has been deployed at over forty matches thus far.

With the Tigers match due to be played on the evening of Friday 4th January, the system was erected on the pitch early on Wednesday morning, allowing it to work its magic for close to three days. The tent comes in several sections and is kept inflated by fans and gas powered heaters.

All this activity had taken place prior to my arrival at the ground on Friday lunchtime, when I found Martin and Stuart having lunch with the Sports & Stadia staff prior to taking down the system so that pitch preparation could take place.

This involves shutting down the fans and unzipping the tented segments, which are then rolled up on special, motorised reels. It is a very slick operation.

The match was due to kick off at 8.00pm that evening, leaving quite a bit of work for Martin and Stuart to complete before the match.

Once the tent was down, Martin and Stuart were able to finish divoting the pitch and repair any surface damage, with some of the wettest areas requiring some sand to restore levels. 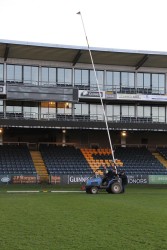 The next job was to erect the posts; these had been removed to accommodate the tent cover. Martin explained that this is now a much easier operation using a post sling, a device that fits onto a tractors rollbar, enabling them to be pushed upright. Both sets of posts can now be put up by two people in less than thirty minutes.

By mid afternoon there was a hive of activity around the ground as the ESPN electricians and cameramen readied themselves for the match.

By now it was dark (5.00pm), and Martin needed the floodlights to be put on so he could mark out the pitch. Using a spray jet linemarker, he mixed up a 5-1 ratio water/paint mix and began stringing out and marking the pitch. It took less than an hour to complete with all the lines neatly marked. The try lines were marked in two directions to ensure they stood out. All that was left to do was put out the post protectors and corner flags. Some of the home supporters had begun to arrive, with one little lad keen to help Martin put one of the corner flags in place.

With the all the pitch work completed, we had the opportunity to get grab a cup tea, along with a very nice complimentary meal of chicken and chips, during which I asked Martin about his work at Sixways.

Martin has worked at the club for fifteen years, taking over as head groundsman when Derek Woodall left several years ago. He and Stuart are responsible for all the playing surfaces on the sixty-five acre site.

In addition to the stadium pitch, there are seventeen rugby pitches to maintain on a daily basis. The club run twenty-one teams, who all play and train at the Sixways complex throughout the week.

In recent years, the club have had a number of new pitches constructed to provide better playing surfaces for the 1st team and academy players. One of the latest is their new first team training pitch adjacent the stadium.

With so many pitches to maintain, Martin's priorities lie primarily with the stadium, academy and senior club pitches. The stadium pitch is maintained at a height of 35mm using a John Deere 2653B triple cylinder mower, cutting on a daily basis throughout the growing season.

All the other pitches are cut using a Wessex Proline 240 rear mounted rotary mower, cutting twice a week in the growing season, and reducing the frequency to once a week, or less, through the winter months. Cutting height is set at 75mm. 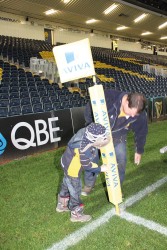 The stadium pitch is a heavy clay soil. with an old primary drainage system installed at five metre centres. Over the years, the drainage potential of the pitch has diminished and, although there have been several attempts to repair it, this year's constant rainfall has compromised the system in that the heavy soil between the drainage runs has remained in a saturated state, thereby slowing down natural infiltration rates.

This has left the modified rootzone profile (installed in 2006) not able to drain freely and become waterlogged, resulting in reduced soil strength. The club are aware of the issues and Martin is currently seeking costs to replace the drainage system.

Back to the matters at hand. After tea, we went back out on to the pitch to see how the the pitch was coping with the drills and warm up routines. To Martin's delight it was holding up well, but he knew the test would come when the match started and the first scrummage took place.

Martin and Stuart made their way to the VIP boxes in the East stand to watch the match and were delighted when, in the ninth minute, David Lemi scored a stunning opening try for the Warriors, (his ninth of the season), and the accurate boot of former Leicester legend, Andy Goode, kicked Worcester into a 14-0 lead. However, Scott Hamilton hit back with a try for the visitors before the break as Warriors then lost Goode to the sin bin.

With the half-time scoreline at 14-5, we went back out on to the pitch to repair areas that had seen scrummage play, treading down the damage and repairing the biggest divots and scars.

With both teams back out for the second half, we made our way back to the stand with the hope that Worcester would continue to take the game to Leicester. However, a tense second half saw the visiting pack claim a penalty try, which they repeated in the final seconds of the match to snatch victory and end the Warriors' long unbeaten run on home soil.

It had been a great match, and the atmosphere in the ground was fantastic. A vocal and partisan capacity crowd had seen their team play in one of the best matches of the season so far, even if the result did not go their way.

The heavy pitch may have even helped to slow Leicester down, but the praise must go to Martin and Stuart for their hard work and commitment to get the match on in the first place. The decision to use the protection cover was a wise one and certainly helped ensure the match went ahead.

Martin is confident that the club have taken on board his concerns about the drainage, and reflected on what the consequences would have been had they lost fixtures to the weather.

At the time of writing, colder weather was forecast, which will, no doubt, test the resolve of Martin and Stuart even further!