by Louise Prettyman
in Industry News
on 24 Jan 2015

0 New products, new franchise and an increased presence for The Grass Group 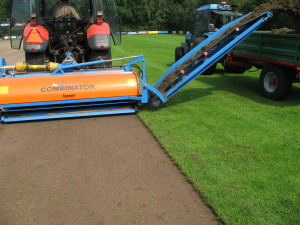 From the newly announced franchise, GKB, comes a great selection of machines - first up is the Combinator suitable for both fraise mowing and verticutting. Fraise mowing removes all foreign matter and shallow rooted grasses from the top layer (0-5cm), and irregularities on uneven ground, to leave a perfectly level surface. Overseeding can then take place, as well as allowing deeper rooting grasses to regenerate.

The cut material is taken away on an elevated conveyor belt, which can be folded away for easy transportation. There are 4 models in the range to cover 1.2m, 1.6m, 2m and 2.4m working widths. For 2015 the rotor has been redesigned enabling 3 different blade types to be fitted to the 200 and 240 models. These new blades feature a flatter tungsten tip designed to be suitable for Hybrid/Desso turf as well as fine turf. 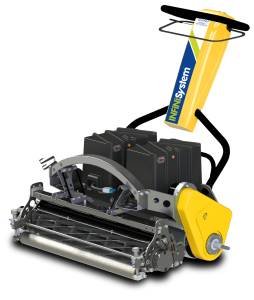 When everything else in the world seems to be getting smaller and smaller the ATT INFiNiSystem™ just keeps getting bigger! Following on the heels of last year's launch of a 26" version, up from the 22" launch model, comes a whopping 30" machine! Built to the same exacting standards that you have come to expect from any ATT product, the 30" INFiNiSystem™ is more than simply an elongated version of its predecessors.The 30" boasts the same unique floating head mechanism that is independent of the traction drive and so overall ground pressure is spread between three rollers. This is as opposed to two as seen on fixed head units, helping to minimise plant stress. It can be driven either fully electrically via a single or double battery module or hybrid electric via an engine generator configuration.

There is a full range of TMSystem™ SMART cassettes tailored specifically for the maintenance of sports turf surfaces, as well as providing suitability for maintaining DESSO GrassMaster® Hybrid systems where synthetic fibre integrity is paramount.

Celebrating 25 years in the UK during 2015, sweeping, mowing and scarification machinery manufacturer Trilo has dramatically increased its' presence this year. Synonymous for their multipurpose machines that can be used 'year-round', Trilo almost doubled the range of equipment on display.