0 'There was a lot of suffering': inventor of football's vanishing spray looks for recognition

At first, it looked rather awkward. As Japanese referee Yuichi Nishimura whipped a can from his waist and sprayed a white, foamy line at the feet of the Croatian wall, the world watched. The Croats stayed put; the Brazil shot missed; the line faded to nothingness. Now you see it, now you don't. 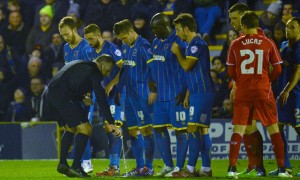 Since this, the first use of vanishing spray in a Fifa World Cup match, the beautifully simplistic, potentially universal addition to the game has continued to feed into evermore leagues around the world. This season has seen Premier League referees snap cans to their holsters for the very first time, amused fans initially cheering every line with intrigue.

In England's elite league, the spray has now simply been accepted - to fans its use is now second nature. But in South America, 9:15 Fair Play, the Argentine company that supplied last summer's tournament, as well as a host of other leagues, continues to struggle for any sort of recognition. Unless individuals go out of their way to actively search for the product, the company have found it difficult to gain the attention that its founders feel they deserve.

Having opted to try and make their product the official spray of the world's game, slow approval processes and financially driven, unlicensed competitors are just some of the challenges 9:15 Fair Play admit to now facing. Speaking to the Guardian, Heine Allemagne, the inventor of the vanishing spray concept and one of the heads of 9:15 Fair Play, explains his vision for a product that, he says, is less about money and more about making sure more walls are standing 9.15 metres back.

Read the full article at the Guardian.