by David Stansfield
in Consultancy and Golf
on 16 Oct 2013 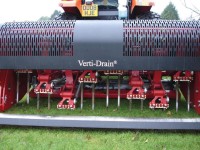 One doesn't have to browse through all fifty issues of Pitchcare magazine to get an idea of how much innovation there has been in the turfcare industry over recent years. Nearly every issue brings to the fore a new idea, a new product or a new machine for better efficiency or better results.

Of course, not every one catches on to become an industry standard like the Verti-Drain, but even in the fairly short lifespan of Pitchcare some real gems of machinery have become so widely used their name has become a generic operation, such as the Graden and Drill 'n' Fill. And, across the available machinery range, the technological advancements in mowing, and in tools such as the Toro ProCore, have been so good it enables one to rethink many of the methods that were written in tablets of stone in the past.

On the pesticide front, there have been lots of changes in the availability and effectiveness of fungicides and insecticides, due to both environmental legislation and economical necessity. One result of this has been the increasing use of tank mixes of products with differing modes of action to get a complementary and, hopefully, more positive result. Even then, the results of expensive applications are often disappointing, and there is still no substitute for a starting point that focuses on cultural control and using chemicals as a back up. 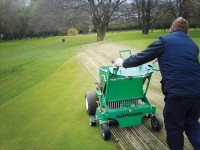 There are still plenty of clubs who never use pesticides and do not suffer any greater level of damage than those who use them routinely. However, it has to be said, too, there is a higher level of tolerance to scars by the end user in situations where there is an enforced ban on pesticides than where nil chemical use is a matter of choice.

At one time, pesticides were the main treatments applied with a sprayer but, in recent years, the range and frequency of spraying operations has increased dramatically, alongside huge improvements in sprayer technology, not least with an ever greater replacement of granular fertiliser treatments with foliar liquids. This has lead to an enhanced standard of presentation on fine turf areas, with a levelling out of peaks and troughs of top growth through the spring and summer months.

Usually, there is a need for a granular at the beginning and end of the season to get things up and running, and often for another late in the year to carry the grass through the autumn and winter but, for the rest of the year, foliar feeds do a very good job. In addition to giving the turf a very consistent appearance, week in and week out, steady growth at a low level helps to give more opportunities for key mechanical operations and for topdressing. And, for golf greens in particular, a low growth response is very helpful in the provision of a fast green speed, often in combination with another chemical that has come into common use in Pitchcare's lifetime, the plant growth regulator, e.g. Primo Maxx or similar. 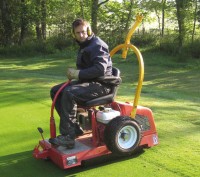 Managing regrowth in between mowing is fundamental to producing a good playing performance on fine turf, whether one subscribes to the 2mm debate or not. So too, it seems, does light rolling, to provide a faster ball roll and an enhanced level of trueness.

Having a greens irons or vibrating roller units has become commonplace on golf courses in the last few years, something that was seen as a rare luxury at the turn of the 21st century. That roller units are so effective should come as no real surprise though - the operation is not fundamentally different in effect to hand mowing. And, whilst there may not be any significant differences in the quality of cut between ride-on and walk-behind mowers, there has always been the perception by the end user that hand cut greens give better playing characteristics. If this were not the case, why is it still normal to hand cut greens for major tournaments?

That said, the focus on grass we see (and the playing performance we sometimes measure to the 'n'th degree as snake, rattle and roll) must never be so overwhelming as to take attention away from the underlying fundamentals. Any successful turf management programme starts in the soil, where money spent on drainage is never wasted. This truism applies, whether the action on drainage is in the form of pipe installation or cultivations to ensure that built-in drainage capacity is optimised. Indeed, I think it can be safely said, if oxygen levels in the topsoil or rootzone are at a maximum, one is already half way to best overall results. When excess ground water can escape without hindrance, and there is a good balance between air-filled and water-filled porosities, there is no doubt the turf will be healthier. 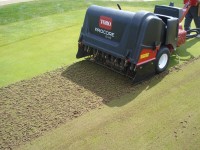 The first line of attack in this respect is an effective aeration programme, with an emphasis on 'effective'. Far too many pay lip service to aeration without really considering what they are aiming to achieve. The target must be to loosen the soil and relieve any compaction through a minimum 25cm (and in some circumstances even deeper) with first class equipment chosen specifically for the particular job in hand, set up for best results.

Proper aeration must be the first item for inclusion on the spreadsheet for the year after mowing, not the last. And with the best tools available, good timing, and with proper explanations of why this is so necessary, there is no reason why this should affect the enjoyment of the players. After all, this is the beginning of better playing surfaces for longer.

It is worth noting, at this point, that although the primary reason for aeration is to maintain good drainage, the follow on from this is that the growing medium as a whole is healthier as a result of oxygen circulation. Grass does not grow in isolation, even on sand, and must integrate with soil-borne bacteria, fungi and invertebrates to properly thrive in a balanced growing environment. 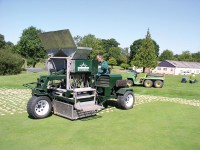 In principle, beneficial micro-organisms are aerobic, which means they need oxygen, whilst harmful micro-organisms are anaerobic and become dominant in compacted waterlogged conditions. Aeration keeps the soil aerobic, but if the ground has been waterlogged in winter, or if the winter has been especially cold, microbe populations can be low for the first part of the growing season, whilst in the circumstances of a high sand or sand-only rootzone mix, micro-organism populations are inherently low.

Adding cocktails of cultured micro-organisms sometimes helps in these situations, but experience suggests a balanced fertiliser programme and the addition of a lasting chemical oxygen booster, such as Oxyrush, is a more reliable approach. Built-in microbes grow very quickly in the presence of enhanced oxygen, often leading to reduced thatch levels, as well as an immediate top growth response.

If we can say money spent on drainage is never wasted, we can equally say that grass doesn't grow in the dark. The problems this poses to the turf on stadium pitches is well documented, and much research has been carried out into how best to provide artificial lighting gantries as a substitute for good sunlight. However, this is not a solution for the shade cast by surrounding trees on golf greens and tees, and I expect some bowling greens have similar issues.

On golf courses, shade and tree root problems are not generally caused by old established broadleaf specimens, more by the thickets of conifers, poplars, etc. that seemed such a good idea when we were encouraged to 'plant a tree in '73' (and to plant some more in '74). There is no doubt those that responded had their hearts in the right place, but often they chose the wrong species and did not think through the consequences of filling up every available space. As such, it has been good to see more and more clubs taking the position that the viability of the course and the viability of woodland depends upon hard decisions on clearance and replanting, often in the face of vociferous and illogical opposition. Long may this continue.

As well as looking to the future with respect of woodland management, I think some hard decisions need to be made too on how best to assess the future success of turf management. Will this continue to be measured on the general satisfaction and pleasure of the end user, the player, or will it be grounded in a plethora of spreadsheets, graphs and statistics?

At present, we seem to be dividing into two camps, with the proponents of the big picture lining up against those that favour micro-analysis. At the end of the day, the likelihood is there will be a point of compromise between the two, but there is some way to go yet before those at the extremes of the spectrum can be convinced others have a point. 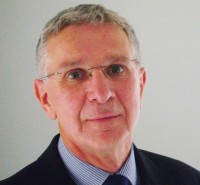 Statistics have their uses, not least in presenting a convincing case to non-specialists, but not all statistics have a value. Sometimes, standing up from the laptop and going for a walk can be much more revealing than a bar chart, and there is no substitute for hands-on experience or 'Blue Sky' thinking. Thinking out of the box leads to innovation, and it is innovation, not statistics, that makes us all better at our respective jobs.

What innovations might be reported on in the next fifty issues of Pitchcare is anyone's guess, but no doubt the magazine will continue to bring us the news as it happens, and I certainly look forward to finding out. Future trends will always be changing and the greenkeeper's or groundsman's job will always be challenging. Even when we have everything under control, we can never beat the weather!