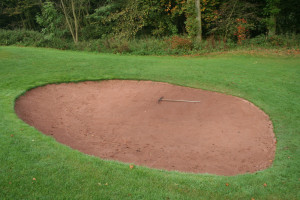 Ten of the Worst: Things that annoy greenkeepers!

Anthony Stockwell, former greenkeeper and now teacher of Sports Turf at a land based college in Kent, gives us his countdown from 10 to 1 of the worst things a golfer can do while in the greenkeeper's office

Surprisingly enough, leaving a bunker unraked isn't a massive concern for a greenkeeper. It's not the correct etiquette, however, and is extremely unfair on the golfers behind you. Always rake the sand no matter how bad the shot!

The practice green on a golf course usually receives nearly three or four times as much play, spike marks and compaction as the other greens on the golf course. If you are going to practice your putting please try and use the far end of the putting green, as this is the part of the green that is quite often used not as much as the point on the green where access is made.
8. Littering

Quite simply please use the bins on the golf course. In the Autumn when the rough is cut on the perimeters on the course, quite often this reveals a long chain of litter on the course. Please pick it up and put it in the bin!

Divots close together in a line will recover twice as quickly and will not require as much expensive seed to recover.

See the rest of the article on the folling link :-: http://www.golfmagic.com/features/ten-of-the-worst-things-that-annoy-greenkeepers/17430.html#ixzz2jIkszpHw