A Surrey golf club has closed down its golf course and is instead focusing entirely on FootGolf, the hybrid version of football and golf that has become increasingly popular in the last two years. 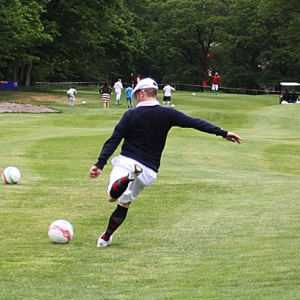 It is thought to be the first time this has happened in the UK.

Burstow Golf Club in Surrey was a pay-and-play nine-hole parkland golf course that was struggling under the economic downturn.

It has now become Burstow FootGolf Centre, an 18-hole venue where participants try to kick a football into large holes in as few kicks as possible. A typical round takes about 90 minutes and prices range from £6 to £15, typically higher than the green fees Burstow Golf Club used to charge.

A spokesman said that the club was particularly attracting stag dos.

"We are under new management," states the club's website. "We are pleased to announce that long term manager and course designer Paul Wright has returned to Burstow FootGolf Centre after a six-year absence.

"The cafe and clubhouse have been redecorated and refurbished and offer a range of light meals, snacks and drinks, and we have special rates for seniors, juniors and societies."

The development at Burstow signifies the growth of FootGolf at a time when golf is in decline.

"Golf is a very expensive sport to play," said Paul Collinson, the UK Footgolf Association's business development manager. "You need a lot of technical ability to play it to a good level and it takes a lot of your time up. An average player takes four to four-and-a-half hours to go round 18 holes, whereas an average player can go round 18 holes of FootGolf in two hours.

"There are 80,000 people a year stopping playing golf, and the youth aren't enticed to play it because it's a technical sport, it's really expensive and it takes a long time.

"Whether they don't have that ability to concentrate for that long or they can't be bothered to dedicate that amount of time to something, I don't know. But 99 percent of people enjoy kicking a football and to be able to go on to a golf course and to be able to do something relatively successfully straight away gives them that instant satisfaction."

Collinson added that 10 UK golf clubs offered FootGolf in 2013, today it is 54 with many more preparing to sign up.

Footgolf is also in the final stages of being officially recognised by Sport England.

"We are finding that golf courses that were really struggling and were realistically looking at closure are bringing in FootGolf and it is saving their business," he said.

"But golfers are massively parochial about their sport. They hear the word football and they think of lager louts, they think of aggression, they think of people being rude and footballs flying around their course, and they are instantly turned off. They don't realise that we have exactly the same etiquette as you would have on a golf course.