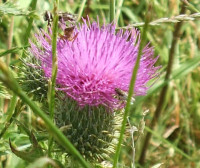 Universally recognised as the Flower of Scotland, but widely seen across the United Kingdom, there are a number of different types of thistle, and the need for control varies.

Creeping thistle and Spear thistle are scheduled under the Weeds Act 1959 as injurious weeds. This means owners of land can be served with an order requiring them to destroy scheduled weeds or be liable for fines.

They can rapidly invade and exclude other species, spreading quickly by means of wind dispersion of seed and are becoming a particular problem in areas where land is not cropped, in set-aside or industrial/amenity areas or land planted with woodland, perennial fruit crops or orchards.

The Cirsium members of the thistle family are the most widespread and commonly found as weeds. They are characterised by prickly leaves and stems up to a metre tall carrying purple/pink tufted flowers in summer, followed by prolific seeding through windborne down.

Some are autumn germinating biennials, like the Spear thistle (Cirsium vulgare) and Marsh thistle (Cirsium palustre). These form a rosette leading to a single tap root and die after flowering in the second summer.

The most injurious thistle of pasture, arable farmland, amenity grassland and non-cropped or neglected ground is the rhizomatous Creeping thistle (Cirsium arvense), flowering from July to September. 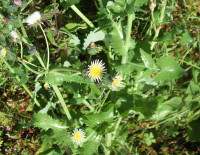 The biennial thistles are relatively easily controlled as they emanate from a single tap root. Topping whilst in flower, but before seed set, will control them in grassland, and selective hormones, like MCPA, 2,4,D and clorpyralid will control them effectively.

Many hormone and sulfonyl urea based herbicides also give good control of the Annual Sowthistle in-crops. 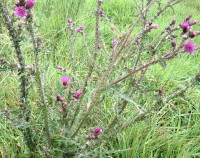 Pasture topping will prevent seeding of perennial thistles, but is usually ineffective at eradication because the main spread is by means of the creeping underground roots or rhizomes. The herbicides above will give some control, but repeat treatments are usually necessary.

When it comes to hard surfaces, like roads, pavements and concrete areas, the perennial thistles in particular are problematic and hasten structural break-up. Targeted spot treatment is the only herbicide application allowed on hard surfaces, so glyphosate is the herbicide of choice.

As with all perennial broad-leaved weeds, Thistles are best controlled with Roundup just as they come into flower and before seed set or senescence.

Creeping thistles and Perennial Sowthistle have large underground root systems which produce new aerial shoots in late spring. They can be poorly controlled in the spring, not only because of protracted emergence of shoots, but also because translocation of glyphosate down to the roots is counter to the flow of assimilates upwards to the growing stems and is less efficient than application after the stems have reached full height.

Excellent control should be achieved by spraying Roundup in late June through until September, when all new shoots have emerged and produced a flowering stem, but before seed set. Spraying whilst in flower will prevent the production of viable seed.

Thistles in pasture or amenity grassland are well suited to weed wiping by hand or tractor/ATV mounted. Topping first in April/May can be really useful to even up the early flowering and the later emerging stems

Use of appropriate rates should give in excess of 95% control one year after treatment. 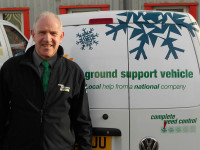 Complete Weed Control offers a nationwide specialist contract service for the eradication of all problem weeds. Director Alan Abel, who operates one of the company's franchises in Wales, comments that the flush of thistles came much more quickly this year and that some individual plants are 'huge'.

Aside from their visual impact, clients are experiencing some unexpected challenges from thistles, he comments.

"At a BBC transmitter station, thistle plumes can interfere with the transmission wires, and on a solar farm some of the giant plants that have come through this year actually block out the light to the solar panels!"

"Thistles are tricky to control because they germinate at different times. You can spray them off in April and then find that another crop comes through six weeks later. However, it is important to avoid leaving them to flower," says Alan.

Much of the company's work on thistles is in situations requiring selective herbicide use, such as on golf courses or amenity grassland.

"In the old days we used MCPA, but now there is a wide range of products containing clopyralid which do a good job. We aim to spray twice during the season to give a good level of control, but it depends on the client's budget," comments Alan.

For hard surfaces, such as pavements, glyphosate is the only option. On industrial sites where thistles and grass weeds are an issue, glyphosate and a low rate of clopyralid tank mix works well, he adds. "We always use a pH buffer to ensure that the water quality is more acid than alkaline as this gives better results."

"To achieve the best control, you must tackle thistles before they go to seed," Alan points out.


Roundup 360 and Roundup 450 are available from the Pitchcare Store.

The thistle is the emblem of the Scottish nation.

Legend has it that a sleeping party of Scots warriors were saved from ambush by an invading Norse army when one of the attackers trod on a thistle with his bare feet. His cries raised the alarm, the roused Scots duly defeated the invaders, and the thistle was adopted as the symbol of Scotland.

A Drunk Man Looks at the Thistle by Hugh MacDiarmid, published in 1926, is one of the most famous works by a Scottish poet. The long and winding poem, in which MacDiarmid contemplates the state of the nation, varies in tone between mysterious, lyrical, serious and comic.

It is essential reading for a visit to Scotland.

The thistle emblem is widely used across Scotland, from the international rugby team's strip, businesses and organisations to the emblems of police constabularies and football teams.

Unappealing as thistles might seem as a food, leaves, roots and seed heads can be eaten once the prickles are removed, and milk thistle is highly regarded by herbalists for use in treating liver conditions.