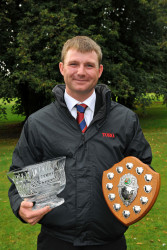 Thomas Flavelle, a greenkeeper at Lingdale Golf Club in Leicestershire, has clinched the title of Toro Student Greenkeeper of the Year 2012.

The 24-year old, who hails from Leicester and studied at Myerscough College, won the coveted award after beating off stiff competition from five fellow student greenkeepers at the recent national finals held at BIGGA House in York.

It was Thomas' dedication to greenkeeping and the pride he takes in his work that impressed the judges in the climax of the competition, which is sponsored by turf machinery and irrigation systems manufacturer Toro and its distributor Lely UK, and organised by the British and International Golf Greenkeepers Association (BIGGA).

Commenting on his accolade, Thomas says: "All I could think when the award was announced was 'oh, wow!' - it was unbelievable. I was just happy to have reached the finals, so winning was a shock. In the lead up to the announcement, I felt the award could have gone to anybody - all the lads were more than capable of winning. But I'm so happy to have won and am really looking forward to representing Toro, Lely and BIGGA. This is a great opportunity to further your education and career, and to meet like-minded people."

It's fair to say that golf and greenkeeping are in Thomas' blood. A keen golfer, like his father and grandfather before him, he first considered a career as a golf professional and still regularly puts his golf handicap of two to the test while also indulging his love for other outdoor sports, such as shooting and rugby. So it was no wonder that an alternative career in the great outdoors beckoned, with his father - Dave Flavelle, course manager at Western Park Golf Club - his inspiration.

"I never wanted to work with my dad," Thomas continues, "but I love the outdoors and golf, so knew through his experiences that I wanted to work in greenkeeping. I'm really interested in wildlife, natural habitats and ecology - it's exciting to work to help make golf more sustainable. I take real pride in my golf course, so I guess that's what came across in the judging."

As part of his prize, Thomas has won an amazing, all-expenses-paid trip to the US. After attending a six-week residential turf management course at the University of Massachusetts in early 2013, he'll also benefit from visits to The Toro Company's global headquarters in Minneapolis and renowned GCSAA Golf Industry Show & Conference in San Diego in February.

"The educational trip to the States is going to be good for me," he enthuses. "I'm interested in course design and agronomy, and don't know which of these routes I'll take as my career progresses, so the scientific nature of the course will really help me decide. I spent a lot of time thinking about whether the trip was right for me before entering the awards, so am certain the educational aspect will be good for me - after all, if you knew everything about greenkeeping, you wouldn't need to go! I've been getting plenty of advice from last year's winner Matt Perks. Overall I'm very thankful to BIGGA, Toro and Lely for this chance."