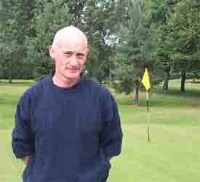 With a wet winter and a hot dry summer there have been a number of problems to overcome. The course remained open throughout the winter where only one day was lost but it meant digging in some drains on a number of the greens and parts of the fairways to take away water that was sitting on top. These drains were hand dug and shingle filled to within four inches(100mm) of the top and then backfilled with soil and the turf replaced. The drains went to either soakaways, existing drains or some of the natural watercourses around the course.

More recently the greens have suffered with dry patch, so Richard hired in a hydra-jet using wetting agents in the water. There is no pop-up irrigation system on the course as it still proves to be an expensive luxury but there are nine water hydrants which have been employed every day during the summer to water the course. The greens have had about half an hour each a day when required and additional hand watering if necessary.

Richard used to spray his greens regularly to avoid the spread of diseases such as Fusarium, but on some advice he stopped this practice preferring to let the greens build up an immunity. He said that although there are instances of the disease it seems to die out very quickly and is no longer a major cause for alarm.

The Three Hammers Golf Complex in South Staffordshire is a 'pay and play' 18 hole Par 3 course which remains open 364 days a year. The course has previously been used three times for the Midlands PGA Par 3 Championships.

As September is now upon us, Richard and his team have embarked on their Autumn renovations of the greens. Mitchells, a local contractor have hollow cored the greens and some of the aprons at two inch (50mm) centres. The cores were removed to be composted and now the top dressing is being put down to help level the surface and provide soil exchange as part of an on going process. 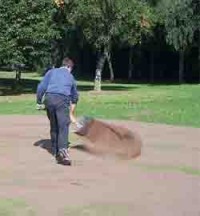 The top dressing is being applied by that time honoured tradition of broadcasting shovel-fulls of Ruffords No2 70:30 mix across the green. The dressing is then worked by hand looting and matting into the core holes and grass sward. Richard explained that despite having a mechanical top-dresser he felt that the compaction caused by machinery defeated his objectives.

Once the greens have been dressed, they will be seeded using a 20:80 Bent/Fescue mix. The Fescue seed is used as a 'carrier' to help introduce more Bent establishment. Prior to seeding an old Sisis spike/slitter will be used in three directions to open up the surface, creating plenty of small holes for the seed to fall into. The seed mix is spread at one ounce per square yard using a cyclone spreader.

Throughout the spring and summer a 14.4.14 slow release fertiliser has been used at 6-8 week intervals, but with the renovation underway the next feed will be a 5.5.10 to promote germination and strengthen the plant for the colder months ahead. Again the fertiliser is applied at a similar rate to the seed at one ounce per square yard.

With limited budgets, machinery is well maintained and serviced, Richard said " Our machines have a winter service and maybe two more regrinds during the year. With so many trees there is always debris on the greens, tees and fairways to go through the mowers so we 'backlap' the mowers every two weeks to maintain a fine clean cut".