0 Three new Charterhouse machines will be on display at Saltex 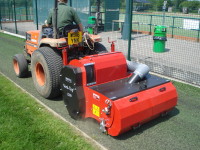 At Saltex 2012, Charterhouse Turf Machinery will be living up to their reputation of having maintenance equipment for all types of playing surfaces with many models on show. In addition, for natural turf they will launch two new machines, and for synthetic the range gets extended by one.

First up is the Redexim Verti-Drain 1517, larger sister to the 1513. These high speed Verti-Drains offer increased outputs to ease busy workloads. This new model has a working width of 1.76M and handles depths of up to 50mm (6"); it weighs in at 520kg and only needs a tractor from 28hp to pull it.

The new 1517 utilises the same unique Redexim adjustable parallelogram action that has become the industry standard solution for intensive aeration of sports turf surfaces. The action is a 'forced heave' one to shatter pans of compacted soil that prevent free drainage and inhibit grass growth. The result is minimised waterlogging and reduced standing water in periods of heavy rain.

On the golf course this means uninterrupted year-round play without resorting to temporary greens, and can reduce the need for expensive drainage works.
Options on the Redexim Verti-Drain 1517 are hollow tines; turf hold down fingers and a rear roller.

Next up is the Redexim Turf-Stripper 1200, a fraise mower to remove the top layer of the pitch. This action removes weeds, thatch and shallow rooted grass (such as Poa) from a playing surface leaving the deeper rooted grass plants to flourish. The machine has a working width of 1.2M (49.2") and is capable of removing up to 50mm (2") of the surface.

Removal of the turf is by 14 discs with 4 cutter knives on each. The unit has a side arm conveyor to transport the debris into a trailer moving along side at the same speed. This conveyor arm folds away over the machine during transport.

The Turf-Stripper 1200 is PTO driven with the recommended tractor in the order of a 30/40 HP variety.

An optional addition to the standard unit is scarifying knives. The turf stripper 1200 also has a big brother which is available in a 2m working width, turf stripper 2000.

Lastly, there is the Redexim Verti-Top 1200. This physically smaller machine will find use in more confined spaces, but still has all the features of its stablemate.

The infill material used in synthetic systems must be kept level for consistency, and the upper carpet fibres have to remain free of litter and detritus to avoid the accumulation of dirt and bacteria, as well as potentially harmful fragments like glass splinters. The Verti-Top 1200 maintains the synthetic turf by removing, cleaning and redistributing the infill material.

The Verti-Top's rotary brush ingeniously removes surface litter and the top 2 - 12mm of infill, and then filters out debris by using a vibrating mechanism. The cleaned infill is then redistributed evenly over the surface, and an adjustable rear brush ensures a smooth finish. During the process a powerful vacuum system uses suction to lift the fine particles such as dust, hair and broken fibres into a filter bag.