0 Thurrock FC training facility up and running thanks to Grassform 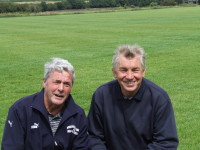 Identifying talent in football is a common trait with many clubs, and even smaller non-league teams are realising that their future depends on this source. Thurrock FC, whose Ship Lane ground is situated alongside the M25/A13 interchange in south Essex is one such club. To aid in their youth development, the club has gone to lengthy steps by instigating the building of a 10 acre training site next to their stadium at Aveley. Grassform Ltd., the Essex based sportsfield contractor, was assigned the role of turning a piece of landfill wasteland into the new facility for both first team and youth training.

Thurrock FC's chairman Tommy South takes up the story: "We had a piece of wasteland that we wanted to utilise that would enable us to develop our youth setup" says Tommy, "as we have joined forces with local side Grays Cosmos so in total we are now running 36 sides from ages 6 to senior. We therefore needed more space for these teams to play as well as for our 1st team to train, and to complete this dream we turned to Grassform." The Thurrock FC 1st team play in the Blue Square Conference South, so reasonably frequent training takes place at that this semi professional level. Using the playing pitch is not always feasible, especially in the winter months. 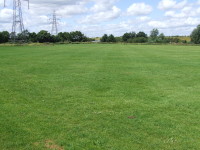 Grassform transformed the wasteland site into a levelled surface by clearing the area of overgrown plant material before adding a large tonnage of topsoil and completing with a sand top before seeding. Subsequent works have included mowing, fertiliser application, aeration and chemical application to removed broadleaf growth. Turf consultant Noel Mackenzie recommended a triple grass seed blend to add cover, depth of root and durability across the site, which two months after seeding has already taken hold well. The site is due to be fully useable later in the 2008/2009 season once root structure has been formed sufficiently, and light use may be possible sooner.

Commenting on Grassform's work at Aveley, Tommy South said "I have to say that I was thoroughly impressed with Grassform's work - their dedication and professionalism was exceptional on the whole project from start to finish. They worked with the consultant and the Football Foundation (who helped part fund the project) to achieve this fantastic facility for us."