Lord Lucan nominated it as 'a pub worthy of visiting'. Quite what tempted him out of hiding in 2005 to make this statement is not known!

Tom James reports on the Nursery Inn, in Stockport which has a surprise in its back garden ....

May 27, 2005 was a truly momentous day in the life of the Nursery Inn, seemingly. For, on that day, the 7th Earl of Lucan nominated the pub as one worthy of visiting, if an entry on their website records the deed correctly.

Quite in what guise 'The world's most wanted man' graced this north-west watering hole remains in doubt but something momentous must have prompted his supposed emergence from obscurity after fleeing following the murder of his children's nanny in November 1974.
What is categorically certain, however, is that a myriad mystery drinkers and diners have entered its historic portals to deliver the highest national accolades possible for a pub.

The Great British Pub has stood for generations at the social heart of every city, town and village across the nation - home from home to millions of customers who share drinks among friends in familiar surroundings.

Today, this bedrock of British life is in danger of disappearing in all but a handful of hostelries as so many pubs appear to have lost both their sense of community and individuality. The traditional pub experience seems all but dead.

Tucked away in the Greater Manchester village of Heaton Norris, however, down a quaint cobbled street is the Nursery Inn, an unprepossessing exterior with a heart of pure gold. Not every pub can boast the longest record of continuous entries in The Good Beer Guide (Stockport & South Manchester area). Arguably, even more unusual today though, the Nursery Inn is home to another endangered breed, once common across northern Britain, now in sad decline, a bowling green, and a crown green one at that.

The pub, originally built in the early 1900s and modernised in 1939 as World War Two broke out, gets its name from the original nursery situated on the site.
There is a rich sporting tradition that even predates the pub, for here was the old home ground of Stockport County FC, before the club moved to its present Edgeley Park site at the start of the 1902/03 season.

Evidence of the local connection still persists in the form of the 1933-34 season team photograph hanging from the wall in the pub vault along with images of local hero, Billy Meredith, who played for both Manchester clubs, City and United.

Meredith ranks high in Nursery Inn folklore, not only for his sporting prowess but also (and even more significantly for the pub) because he was one of the founding members of the Nursery Bowling club, which started up in 1917. It is now one of the most successful in the area with four teams in the Stockport and District league (of which they were founding members), two in the Altrincham and Sale and Veteran leagues and one in the Wednesday evening Premier League of which they are the only club in the Stockport area to enter a team.

The club is thriving, with currently more than 80 members of varying ages, although they are striving to encourage children to get involved, along with anyone who fancies learning something new.

"This is a very healthy number for a bowls club and is currently the largest in Stockport," enthuses Malcolm Savage, 25-year-long member and its former secretary. He is speaking as yet another match begins on the crown green that has for so long seen competitive action.

Strictly speaking, pub and club operate independently. However, they clearly acknowledge, and appreciate, the benefits of partnering each other in activities that promote both causes - and you need look no further than the modern decked area at the back of the pub where locals and those from farther afield enjoy award-winning ales while watching the bowls action, crowds often gathering on match days, especially Wednesday evenings.

The pub and the club have recently teamed up to run a yearly bowls fun day - a bid to spread the word and to get more local people involved with a sport much cherished in these parts. A barbeque will be laid on for guests for a small fee and visitors will have the chance to join up. The scheme is just one in a series of initiatives planned by the club and the Nursery's landlord, Simon Wetton, who took over the reigns from his stepfather, George Lindsay, when he retired, and has continued to maintain and further the sterling reputation the pub gained under George and his wife, Sue.

Perhaps most significant among the changes under his stewardship have been to the bowls arena itself, a shining - some claim matchless - example of a highly professionally run facility in what is essentially the back garden of a pub. 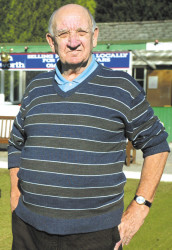 Even in a summer of extremes such as this one, the quality of the surface seems hard to fault. The immaculately manicured surface is maintained to the highest possible standard and is set off by thickly planted vines, hedges and roses surrounding the green, punctuated by commemorative seating, including a specially made memorial arbour bench dedicated to a former member of the bowls society and made use of regularly by visiting couples.
Simon, who was the architect of the changes, including the decision to replace the old brick walls surrounding the green, is not a man to stand still or to stay rooted in the past.

Perimeter advertising is springing up as local professionals such as estate agents, solicitors and property letting and management agents recognise the business benefits of aligning themselves with such a popular haunt.

The heavy schedule of bowling five nights a week from April to October, including floodlit play, even late into the night in summer, has failed to take its toll on the green, largely due to the care and attention lavished on it by the expert hands of former professional cricketer, Bill Arrowsmith, who keeps the turf in perfect playing condition.

Despite the torrential summer downpours, play was only occasionally interrupted, Bill explains: "This is one of the best draining greens in the county. Even after it has been flooded, the water disappears within an hour."

The reason soon becomes clear. Although part time, Bill is decidedly no amateur and brings to the maintenance task a level of professionalism and expertise one would expect from a former Head Groundsman of Liverpool College. Now 75, Bill has have been maintaining the Nursery's green for eighteen years and his dedication is applauded by all.

"The green was laid during the First World War over part of the football pitch that was the home of Stockport County.

The foundations of the green are probably those of the football pitch, namely a layer of fine pebbles about two feet below the green surface"
"I topdress with a sandy silt in March, about a fortnight before the season starts, then scarify every quarter," he continues. "But we've had a dreadful year and thatch can build up if the weather makes it unsuitable for scarifying. The green can feel like an Axminster carpet underfoot - it feels so soft." Incredibly, his summer scarification in August removed no less than twenty dustbins-full of thatch.

The soil is naturally very sandy, a characteristic, which, with the pebble layer, accounts for the exceptionally good drainage the green enjoys.
Bill drops the blade height of his Ransomes Auto Certes mower during the year, knowing that the chewings fescue can cope with close cropping. "This grass quickly recovers from short cutting," he states matter of factly, adding, just as bluntly, that he is working and must return to his duties. A professional indeed.

The Auto Certes is still going strong after twenty years, albeit with modifications. A new aluminium collection box replaced the original iron one and, two years ago, a Honda engine was fitted.

Recent milder winters means regular cutting to prevent the turf knotting, usually monthly, with blades set slightly higher.
He has nearly completed autumn renovations including overseeding with a Sisis adapted scarifier that allows seed to drop into 0.5in deep channels in the turf.

A tenanted pub is nothing without a supportive brewery and Manchester based Hyde's is proving to be just that. Hyde's is still owned and managed as a family business, no mean feat in an age when most traditional breweries have been swallowed up by the giants of the industry.

Hyde's is keen to maintain their historic estate, which includes the Nursery Inn. "The North has a long tradition of crown green bowling" a Hyde's spokesman confirmed. "We are keen to maintain this sporting heritage in pubs such as the Nursery Inn - it creates such a thriving community focus."
Many crown green followers believe the game must be allowed to survive and thrive, if for no other reason than it presents a greater challenge than its lawn green counterpart, they maintain.

The crown green game has always been associated more with pubs and taverns than lawn green bowls and, although it fails to command the same scale of popularity as flat green, pockets persist within its home base in the North.

The running of the bowls green is partly funded by the brewery, which Simon says allocates a modest sum to the club each year. The supportive relationship between the pub and the brewery undoubtedly fosters a healthy customer base, he believes, but no single factor can account for the pub's huge success, which hit an all-time high earlier this millennium when the Campaign For Real Ale (CAMRA) awarded it the accolade of 'Pub of the Year' in 2001.

The quality of service, beautifully kept beer, fine home-cooked cuisine and thriving community spirit all add to the pub's fearsome pedigree. The jewel in the crown though must be the pub's immaculate bowls facility, enjoyed by so many for so long and now finding popularity among a younger generation.